Nowadays there are quite a lot rhythm titles for smartphones and some of them being quite popular in Asia. Some were translated in English and got their global releases, so I have decided to get into one of these.

Tapsonic Top – Music Grand Prix is the latest installment of the Tapsonic series. Developed and released by Neowiz studios, the game is available worldwide for Android and IOS using devices.

The game comes as a sequel to another Neowiz title – DJMax. It offers the players many songs from DJMax, as well as some new original ones.

“The only way to put the chaos in the universe in order, is with music”
(This quote is from the game, and I can't summarize better a rhythm game with only one sentence.)

The action is set in a small idol agency, located somewhere in the Space. There you get the role of a producer, being guided by the agency’s manager – Lena. The story is centered around 4 other trainees – Jay, Yuri, Czerny, Senah. All of them made with different personalities, from carefree to shy, having problem with expressing feelings(like the best girl in the game in my opinion – Czerny).

Because of all these different personalities,  I never skipped even a single storyline scene. It  was pretty exciting for me to watch all dialogue screens and follow up with the story. Your goal in that story is basically recruiting more idols and making this agency famous.

Tapsonic – Music Grand Prix is a rhythm game that contains some JRPG elements as you build a team up to four idols, leveling, evolving and upgrading their skills. All of that in order to make higher score, playing the various songs this game offers. Well made, detailed 2d anime style graphics make the experience even more pleasant.

The gameplay is centered around building a team and working on it. One of your idols must get the leader role of it, and your performance will benefit from hers/his leader skill. Except of that idols poses different skills that give bonus points to your score according to the different moves you have to perform during the play. The second skill can be classified as tap, long, flick or slide. These are actually the moves we must perform successfully to not lose our combo. Also your team has only 1 slot for each, so it is impossible to put 2 different characters that possess Long skill.

Every idol is classed in different attribute. It can be Vocal, Dancer or a Session. Songs also go to one of these attributes. Playing a track, matching its attribute with full team of the same, gives you bonus points. As you are playing, there is a bar on the top left side of the screen. It shows what grade your current play score goes. The grade is set from C to S+, the highest. However, without enhancing your idols, leveling them and their skills or simply evolving them to higher rarity(from 1 to 5 stars), it will be impossible to reach S+ grade of performance. Even if you haven’t missed a single beat of the track that you are playing. 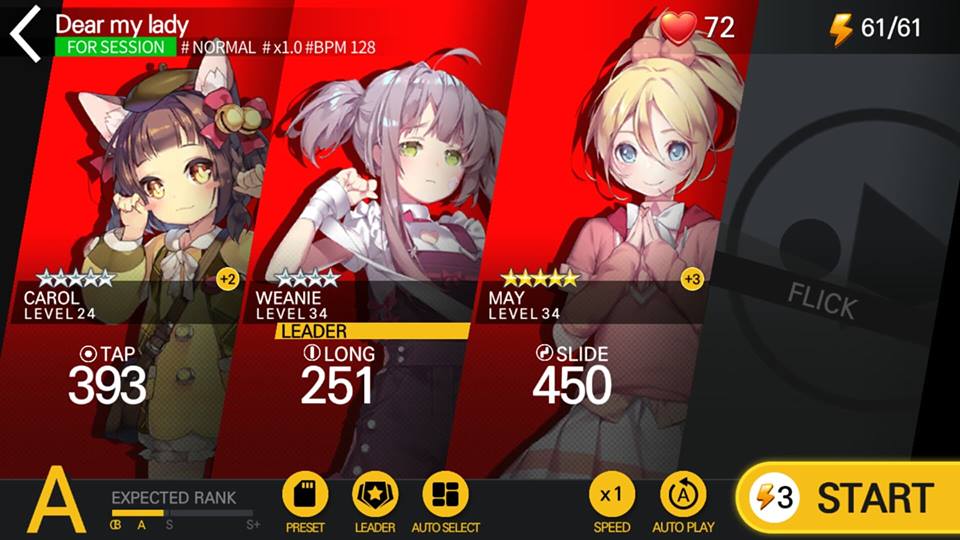 Playing Tapsonic Top can be turned into quite difficult experience, as the songs can be played on different difficulty, or simply by raising the beat tempo. Each difficult mode has its own score and tasks, rewarding the players with game currency or items that can help improving the idols. Players enter a song with proper health bar, located on the top right side of the screen. Its total value is calculated based on your account level, and  raising it by playing more songs. The times you can play and gain experience on your account depends on your stamina value. Deducted for playing stamina points recharges by time or spending V-Bucks(the currency in this game). This is something pretty common for every online game nowadays.

As you can guess, if you miss a beat your combo starts from 0, resulting in less points to your end song score. This also results in a deduction from your health bar. When HP is at 0, means either you must spend V-Bucks to continue from this point or game over.

The V-bucks are mainly used on a gacha system, to obtain idols. There rarity from this casting can be from 3 stars to, if you are lucky enough, 5 stars. There are plenty of song tasks, daily login bonuses, event and mission objectives that will give the players decent amount of V - Bucks. Nothing for f2p players to complain from.

Developers have taken the action, to periodically add new songs. They can be obtained for free or bought with gold or V-Bucks at the song shop. Also different costumes, changing the look of your idols are released, and that way some character customization can be experienced in this game.

Tapsonic – Music Grand Prix offers different features and play modes that can be participated. Multiplayer is one of them.  Two types of Multiplayer game can be found by pressing the tab “Grand Prix”, located at your home screen.

Rank Mode – Faction based multiplayer. Players choose one of the factions they can join. Different songs are given daily. Your score is added to the total of the faction one. At the end of the season is compared and rewarded according the rest factions.

Ghost Battle- this is the other multiplayer mode. There you can challenge another player in a real-time result, one song score duel.

The 2D character design and the overall graphics are well made. The artwork can be compared to some good drawn animes. Sadly, I couldn’t find who is behind this impressive and detailed artwork.

Music is made or remixed by different people. I have noticed the name of ESti, the person who is responsible for the music in Destiny Child. The songs are high quality material, with many different elements, from KPop to techno and electro-industrial themes.

Summarizing the many different features, the JRPG elements and the high quality artwork and music, I can proudly say this game can get easily get top 3 rhythm mobile games chart. Definitely worth a try if you are fan of such games. Even if you are not, it is still exciting making your own RPG Jukebox, isn’t it?

Shortly after we start the game for first time, there will be calibration feature, that will set the game to run best for our device. However, I must also note that if you have old device you may experience low frame rate drop, caused mainly by the competitive graphics and visual effects.

Personal Rating based on global version:

Every idol is classed in different attribute.