Anyone who has played any of the Total War -games set into the age of ancient Rome has probably led armies of legionaries. What does it feel like to be an individual soldier in such an army? Ryse: Son of Rome is all about experiencing the blood-drenched life of a Roman legionary, and in the fields of action and gore it certainly delivers.

The game follows the tale of Marius Titus, an idealistic and devoted man living in Rome during the reign of emperor Nero. Marius has recently finished his training and is now a fully fledged legionary awaiting to be posted to a province of the empire. But his life transforms swiftly into a blood-soaked hell when his home is assaulted by a host of barbarians who murder his parents and sister. Enraged and hungry for vengeance, Marius joins the fourteenth legion led by the famed and battle-hardened commander Vitallion. The legion has been given a dangerous task: to crush a growing rebellion in Britannia, which is threatening to spread if left unchecked. But defeating the Britons is no easy task, as the Romans soon discover. 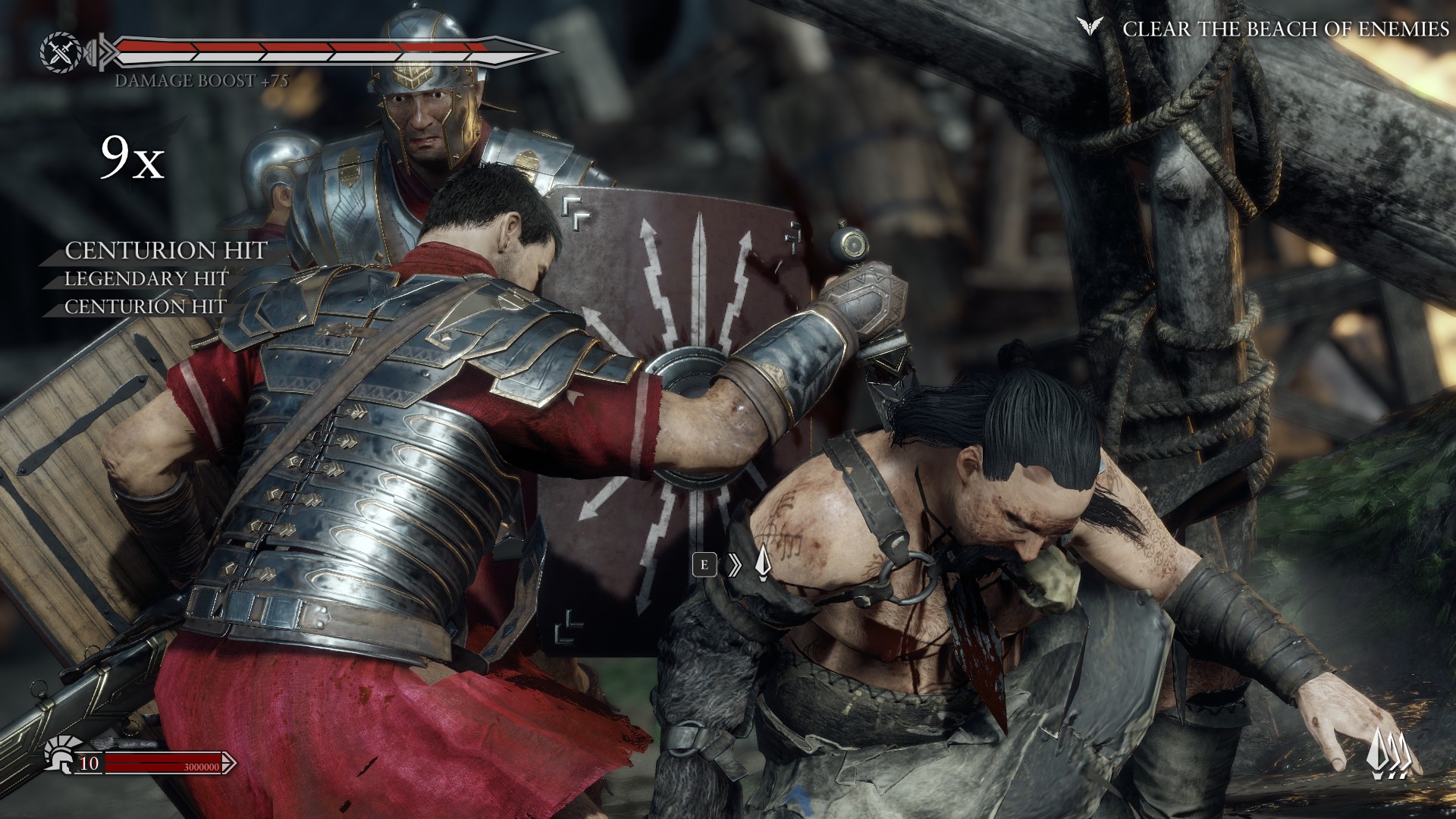 Marius has two primary forms of attack: striking with his sword or bashing the foes with his shield, with slower and more powerful versions of these attacks can also be performed. The key idea is to injure the enemies enough with repeated, swift strikes and then finish them off with brutal executions. The executions are performed by pressing the correct attack button at the right time, with well-performed executions granting bigger bonuses. These bonuses can restore your health, increase your damage for a while or increase your focus meter. Performing the focus attack temporarily stuns nearby enemies making finishing them easier. It's also possible to collect and hurl pila, the javelins, to deal damage from afar. Blocking basic strikes of the enemies feels almost childishly easy, though there are stronger foes capable of performing power attacks which can only be blocked with perfect timing. Dodging is a far better defense against such enemies. 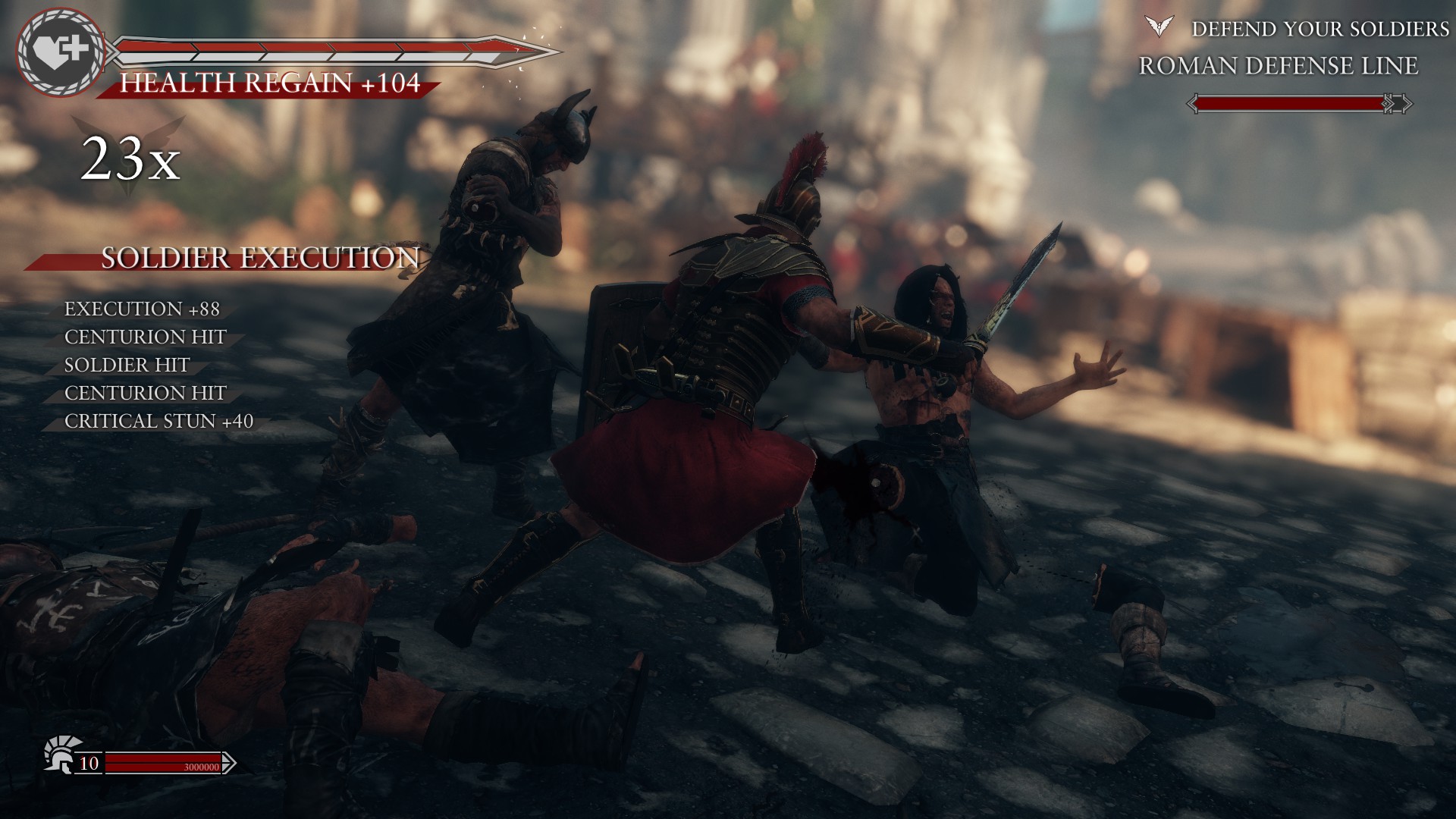 While Marius does most of the fighting, there's some focus on the other soldiers of the legion as well. As Marius makes a name for himself among the soldiers, he eventually becomes a leader. There are several times where you must choose where to position a defensive line or what will the archers or catapults focus on. For example, you can have the catapults either to concentrate their fire on the catapults of the enemy, or their approaching siege towers. But whichever you choose, you're still left to deal with the other obstacle yourself. At a few scenes you'll also be leading the legionaries in the famed testudo formation. You need to pick the correct times to raise the shields to block incoming arrows and to return fire with javelins. 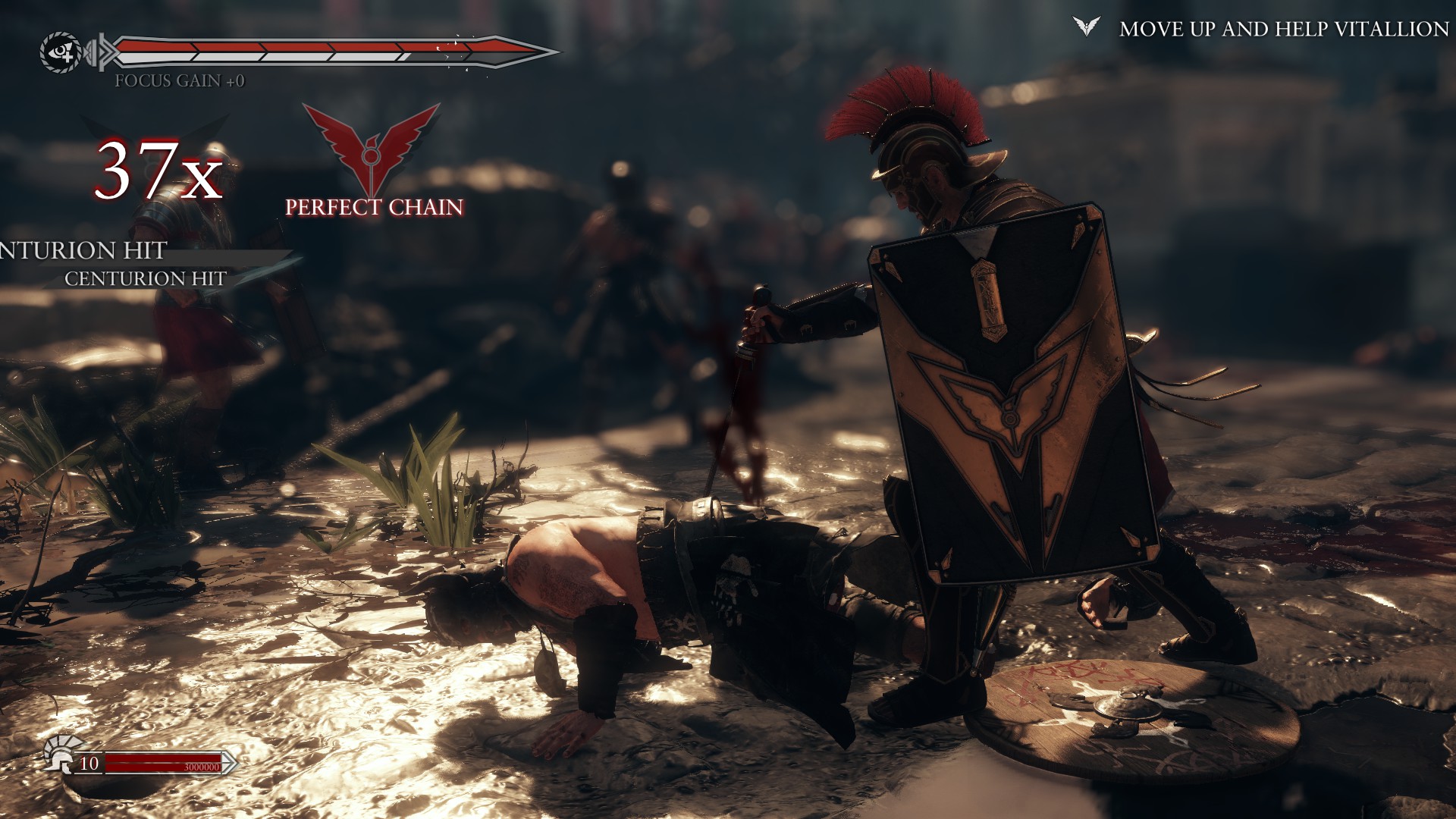 Ryse: Son of Rome promises fighting, action and bloodshed, and as far as I can say, it provides exactly what it promises. And it has excellent graphics and music to boot. However, it doesn't come without it's flaws. First of all, the game's main story is pretty short, beating the story mode in one sitting is relatively easy. And in my experience, only the Legendary difficulty which is unlocked by beating the story, gives any real challenge, so the game could be a bit too easy for some folks. 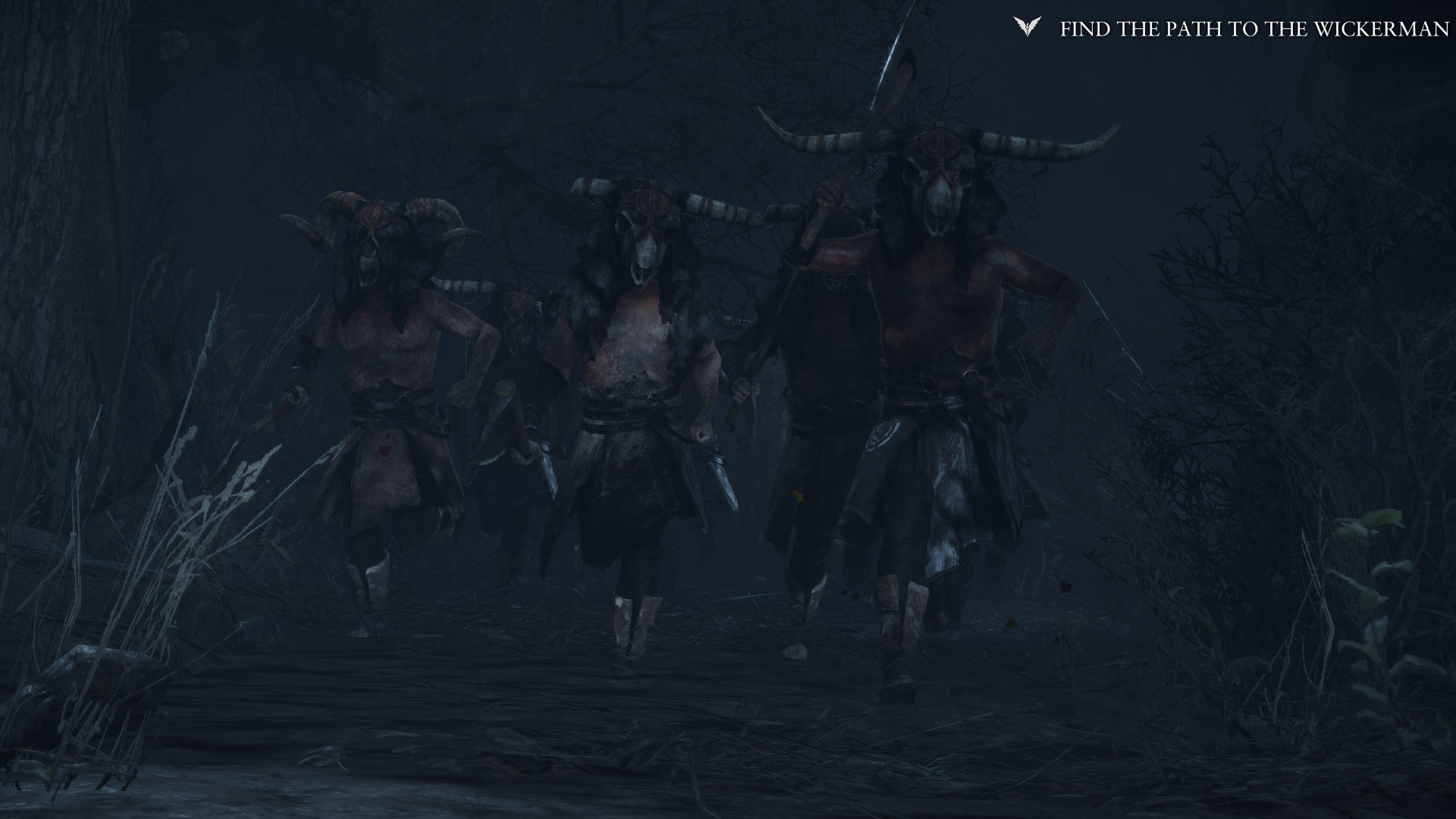 But the biggest thing that divides people about the game is the fact that historical accuracy is overwritten by the rule of cool more often than not. Yes, there was a rebellion during Nero's reign and the pila were among other things used to render the enemy's shields unusable. But other than that, artistic license dominates. For example, Commodus is depicted as Nero's son, despite there being a century-sized gap between the two, and Marius' fighting style is quite showy, probably more fitting for a gladiator than an actual legionary. Truthfully, the developers admitted that a historically accurate presentation was never their goal. My personal opinion is that a flawed gladius is better than a flawless wooden sword. Whether other people feel that way depends entirely on who you ask. 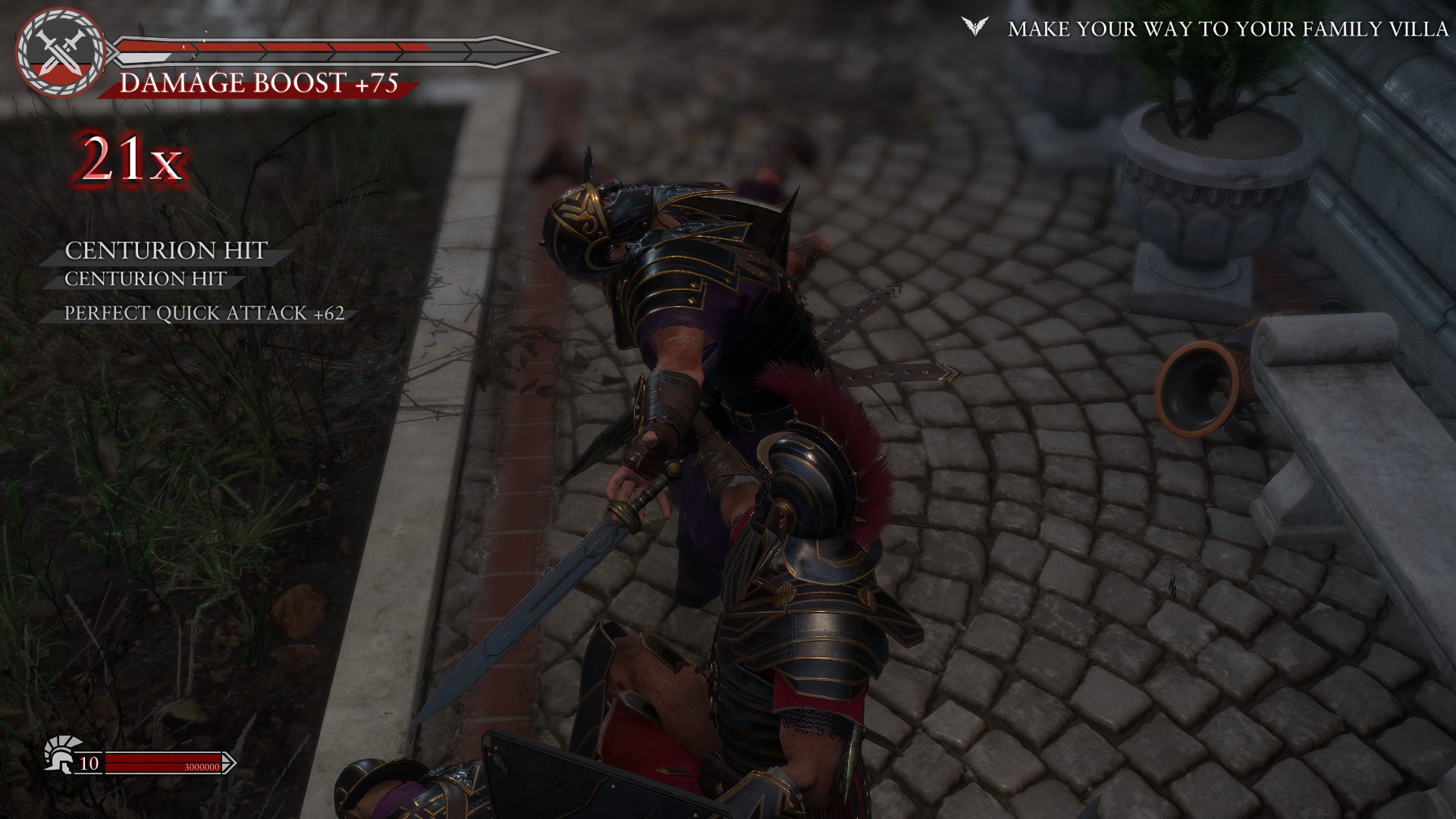 I recently came across this game in the reward section of gamehag...i also watched its gameplay and its cool...with great action and fighting skills.

As Marius makes a name for himself among the soldiers, he eventually becomes a leader.

wow fantastic game i like this game very much

it's a nice game. the article really helped alot. thanks

The image quality is excellent, all kinds of qte are very handsome, even though the process is very short, and don't try to play online, it is very boring.

really goood article i love it

definetly agree, you have to buy the game

This game was really fun and the article does a good job of explaining what it's about. Good work!