Party Hard 2 is an independent video game released by tinyBuild, which combines strategy and stealth elements. You are a psychological killer. You just want to take a break. In the middle of the night, however, your neighbour is having an all-night party, so you decide to end the stupid party in your own way.

Quite a good plot, presenting the first part in flashback form. Unfortunately, all the animations of the past scenes are presented in static form rather than dynamic, which can not help but make people regret. 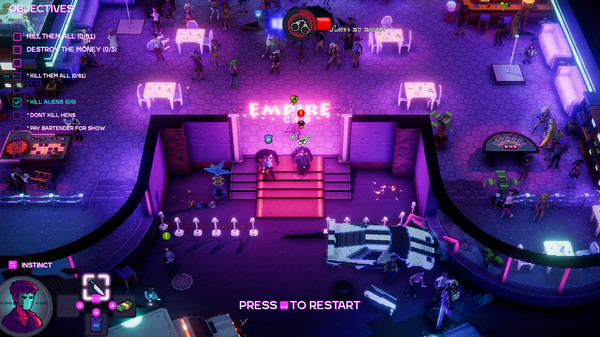 Compared with a generation of rudimentary 2-D maps, this one becomes a 3-D bird's-eye view, which makes the details clearer and the map layers clearer, and the rich and diverse environment scenes also bring us a perfect game experience.

Luxurious night parties also have a strong visual impact. There is loud music, flashing lights under neon lights, and even a variety of people you can find: receptionists in rabbit dresses, runaways with bare arms, and even illegal chemical experiments in secret rooms. Researchers in white coats. All kinds of characters are in this fine pixel wind. 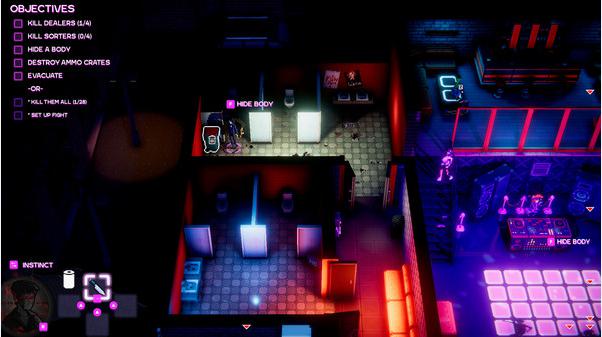 You can choose the difficulty of the game and the role you want to play at the beginning of the game (there are currently four optional roles). With the start of the animation, you need to be invisible to anyone (dead people don't speak, do they?). In the case of killing a target to unlock the next level. There are a lot of interactive props or objects in the game, so you can rack your brains to think about how to achieve your mission goals.

At the same time, there are many interesting interactions in the game: you can call the bear on the circus phone on the poster, get stunned by the guards, and then cause civil strife in the group, and even Easter egg: ''The Terminator''! Yes, that's right, it is the terminator who is too hard to kill.

But once someone witnesses your killing and you can't shut up immediately, you can choose to come back. This is the point that I want to make most of the game. I can run faster than an NPC or a policeman. Many times I can only desperately watch the passers-by NPC report to the police, and then I am handcuffed by the police... You let me run two more steps!

It even has a local cooperation mode, you can discuss with your friends how to split up the action, like a criminal gang, making the game more fun and exciting.

Verdict
+ Rich and varied props and a large number of interactive elements
+ Great soundtrack
+ Crafting system
- Lack of instructions for props, you have to figure out how to use it
- Story presentation is inconsistent

Party Hard 2 has made a qualitative leap in plot, picture, music and level of detail compared with the initial generation that was launched in 15 years even though there are still some minor flaws.

Yeah seems okay to me too!