Rate this article "Review of the Shadow Tactics: Blades of the Shogun"

Review of the Shadow Tactics: Blades of the Shogun

As the name of the game suggests, Shadow Tactics is a game of Japanese themes. Expect samurai, suicide daggers and beautiful surroundings. In short - the Assassin's Creed we never got, just with an isometric camera. The shop is located in the so-called Edo period, that is, the 19th century, and follows a group of individuals that prevent the destabilization of the Japanese Empire. The story itself is performed very banally through a series of sounded dialogs and is not a major motivator for playing. However, the same story works well as a general context for the tactical maneuvers you perform.

The focus of the game is on shuffling and quiet killing, as you know if you played the games like Commandose or Desperadose. The enemy is numerically superior, and you must use the special powers of your characters to perform your task. There are five such characters here and each one is unique in something, as if belonging to a particular class. Samurai Mugen is, for example, a "tank" that you go to a direct fight. Ninjas Hayato is a more sophisticated "rogue" with which you can jump over the rooftops and thus gain a strategic advantage over the enemy.

All the characters are killed by the arsenal of arsenal, but real killing comes only when they cooperate with each other. Here on the scene comes the so-called. Shadow mode in which you can orchestrate actions (primarily attacks) and at the appropriate time, you can automate them by pressing one key. Such tactics are not just to make it easy for you to play, but the game is looking for it at a very early stage. Moreover, some enemies can only be eliminated with a combination of attacks, and this is where the need for Shadow mode comes in. Coordinated moves are crucial and lie in all of the beauty of tactics - both in advance and in real time. 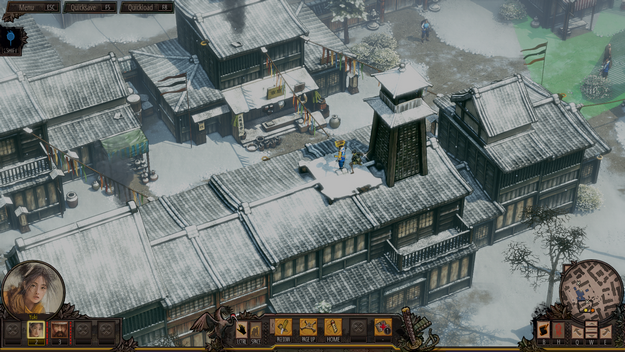 This "real time" plugin means that the game does not tolerate errors. If it turns out that your plan did not pass the best game, you will not automatically be punished for it, but you will have the chance to get out of the trouble. However, with sordid and unreasonable actions you can further exacerbate your life as hostile patrols come whenever a loud action starts. For the gameplay, this is a double-edged sword because many situations in the first game are solved by the method of attempts and mistakes. Only when you see how many enemies will react to your move, you know if he is "right".

However, unlike Commandos and Desperados, Shadow Tactics has a little more freedom to solve missions. Often you have at least two ways to perform a task, and it is skillfully designed so that the game itself chooses the characters that are available to you during the mission. For example, in a mission with a sniper you can take the target from a distance, but you can poison it with a thief. The maps are large and you are not obliged to clean all the enemies to reach the main location, but that does not mean that you will walk easily to walk them. Each of the 13 missions requires that you invest at least one hour of your time in it, and then you are challenged to re-enter the speedrunners. In addition to classic achievements, you also have medals for which the re-shift of missions is just as interesting as the first time. 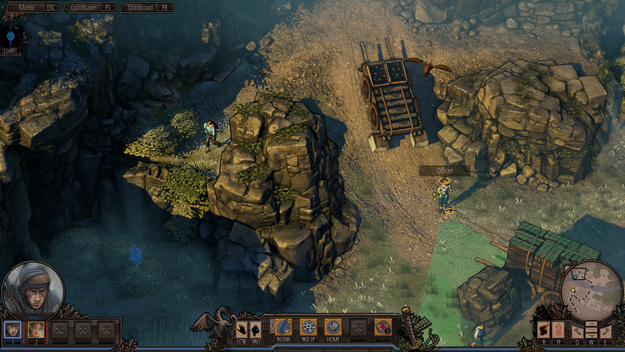 It is surprising how good a game is designed to control gamepad. Of course, the mouse and keyboard are preferred here, but it also has the controller of its advantages insofar as it has more precise control over the face. You determine your path of movement yourself, while on the PC, the character determines the path to the point you give him. Fortunately, and on PC, it is possible to play with the controller, so if you already have a dialing option, you'd rather look at the version for the PC, since it's locked to 30 fps at consoles (although this is not crucial in this slower game).

Shadow Tactics is made in a full-shading technique so it looks like a cartoon cartoon. If you are not a supporter of such a style (like Borderlands), this might be a refusal of the game. Personally, I'm not a fan of thick black edges on objects, but that does not mean that the game does not look nice. It is extracted by an excellent design that is purely "Japanese." You know that - beautiful gardens, exotic architecture, etc. Shadow Tactics is, accordingly, comfortable in the ranks of games such as Onimusha, Mark of the Ninja, Nioh and others. 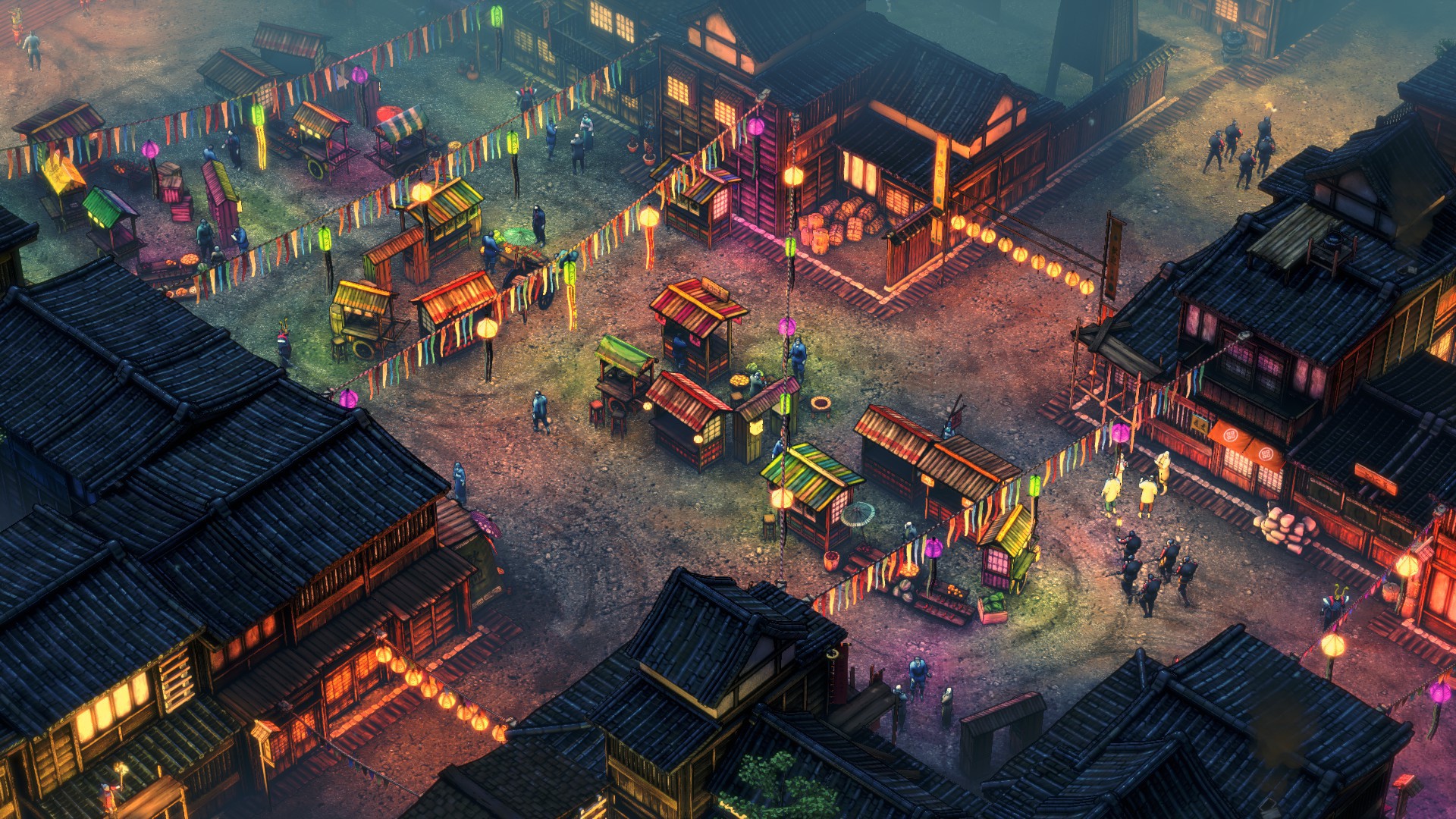 Partial praise goes to the sound. It's great that the game comes with an optional voice acting in Japanese, which greatly contributes to the atmosphere. On the other hand, music is not particularly prominent, which is strange to me for this type of game. In all games of this type, music always got me easily into the ear and then I would turn it around for a long time. This was not the case here, because I did not memorize almost any melody. It's not a terrible minus, but that's it - I have to mention it.

The only objection I have is on the camera. Most of the time things are clear and clearly visible, but I was noticing that I must stop the action in order to adjust the camera because it does not follow the character and its movement. And in a game based on the method of attempts and mistakes I do not want my camera to be a weight that will lead me to error. 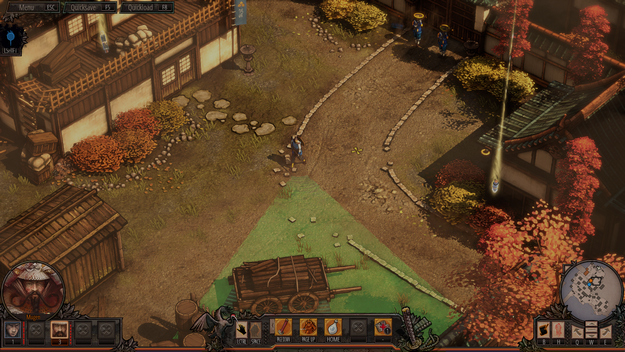 When all the impressions are sorted and sorted, Shadow Tactics is a greatly designed game that I would definitely recommend to fans of brainwave and solitaire in unexpected circumstances. I must point out that this is not a fun game for all players, especially if the consoles are your domain and you hear the RTT genre for the first time. With this in mind, if you approach this game, you should approach as carefully as a ninja. Do not be Tom Cruise who wants to hit the cannons with the sword.

Rate this article Review of the Shadow Tactics: Blades of the Shogun

very colorful but no attracion in gameplay