Rate this article "Review of the game: The Gardens Between"

Review of the game: The Gardens Between

The Gardens Between is a 3D brainstorm that takes us into a dreamy space in search of memories of the carefree childhood of two young people. It is played exclusively in single-player and lasts for 5-6 hours. It does not contain action elements but is exclusively dedicated to exercising brainwaves.

If you come across any of the games with two protagonists today, you can be pretty sure that after the cover, you will be welcomed by one of those hard-hitting stories that play through the wires of your heart. This is now, let's call it so, some trend and in general very few games deviate from it. This is especially true if the mentioned games come with a fantastic, fairy-tale graphic style and a simple gameplay core. In that case, you can be sure what type of story you are waiting for. First we cried out with Brothers: A Tale of Two Sons, then there was A Way Out, followed by Unravel Two, and now we have The Gardens Between - another poker player for the title in the category of games that caused most of the unannounced visits to a psychiatrist.

Regarding the importance of the narrative framework and generally the tone that extends through the gardens in The Gardens Between, this title does not hide its charts. The introductory scene takes us to a tree house where the best friends of Arina and Frendt sit in silence and look at the distance. The darkness fell and the rain fell - in the background a sorrowful piece of piano was swaying. It is clear that something is wrong. However, at one point something unexpected happens: there is an unusual purple light, a ball of energy is materialized in the center of the house. One of the protagonists touches it, and they are transported to a new world.

The adventure of the two best friends was designed as a journey through memories of the important moments of their friendship. They in silence pass through a surreal world, saturated from a series of islands whose architecture is made up of objects they met during the years of mutual companionship. Instead of hanging bridges, we have phones from the house where they are staying, table lamps play the role of trees, gigantic washing machines spread over the surface of the island, there are balls they used to play, telescopes watched by stars … 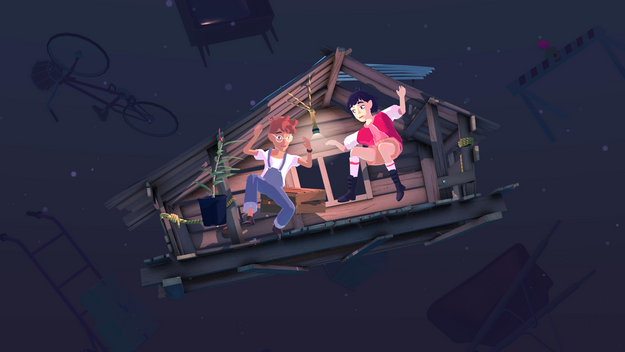 Each of the island gardens was constructed in a consistent manner with a clearly defined goal. At the center of each of them is the elevation to which it is necessary to climb. Sometimes it is higher, sometimes slightly lower, but always blocked up. To climb to the top, friends must manipulate objects in the garden: Move obstacles, create new roads, use imagination and coordinate movements to circle around the elevation to reach the destination. 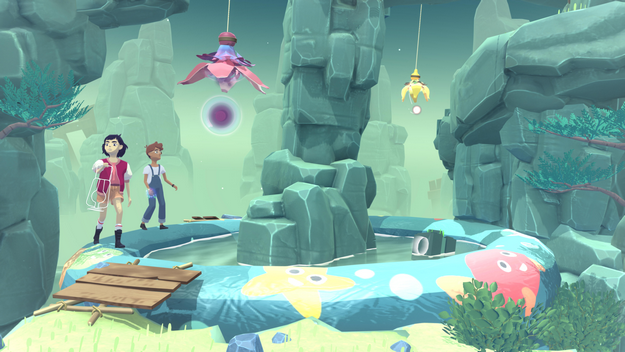 Apart from the fact that the characters themselves are in the claws of time, the company also makes all the other objects on the island. The aforementioned washing machines on the touch of the fungus begin to descend down the slope, the balls roll off and hit the plastic skeleton of the dinosaur that collapses and forgets your way, and so on. The trick to crossing each level, apart from overcoming spatial obstacles, is also the use of special timing terminals where only certain objects can be moved in an effort to find a winning combination that will clear the way.

From the simplicity of his mechanics, one can easily conclude that in this title there is not much flexibility and diversity in the approach to playing through its duration. This is the correct conclusion - The Gardens Between is wholly consistent in what he expects of the players, which is the use of well-known mechanics when mastering increasingly difficult riddles. As characters travel from one island to another, they face increasingly intricate and difficult rises to their peaks seeking to find increasingly complicated combinations in spatial-temporal manipulation. 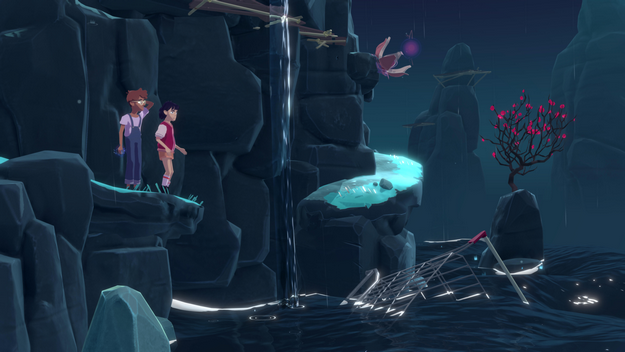 Except in the gameplay, the game is consistent in its own atmosphere. As the islands are always built from parts of memories, the main goal of the protagonists is to integrate them into a whole, find their meaning. From there, their journey to the top of each of the islands, to the place where the fragments seen are integrated into the whole, and where the entire events from their past are shown before them (and a player).

This metaphorical and nostalgic journey through childhood is done in silence, solely through indications, followed by melancholy piano music. Managing space and time as the main mechanic is not something like that in TARDIS - there are no radical changes in the world, the environment does not change from the foundations. It's just there to allow the protagonists to get rid of their adventure. 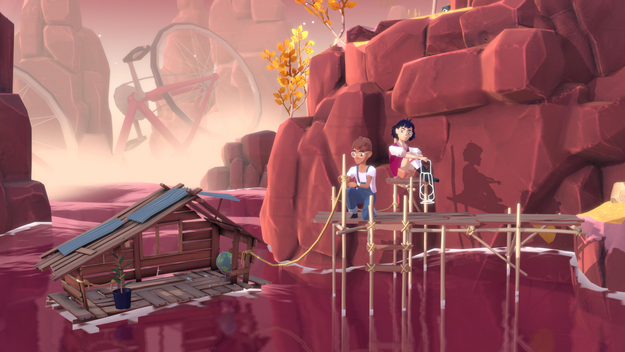 One such "brainchild" immediately comes to mind: "What would we do to make the player run around the hill in order to find the right one in a row of boxes crossing from one side of the hill to another?" Although it sounds raw, it is in perfect harmony with the specificity of this title, expressed by the feeling of 3D space - so they entangle this puzzle. And see the devil, it's really good. Why then, I have to ask simply, because I do not understand, but at the next moment I will completely give up this idea?

The Gardens Between had so much potential to transform its 3D space simulation into a source of innovative riddles, and eventually decided to focus on flat puzzles typically seen in 2D puzzles. Rare are cases in which spatial depth needs to be considered in order to resolve, as in many cases puzzles are strictly related to a small part of the space or are so banal that the idea of multi-dimensionality of the space itself does not come to mind at all.

Rate this article Review of the game: The Gardens Between