Rate this article "Review of the game: Aragami"

Review of the game: Aragami

The story of the game follows a ghost called Aragami in his vengeful march to which a certain Yamiko sent him, whose fellow citizens killed a clan of warriors using light magic. The story itself is quite predictable, but also a much-interesting base for excellent stealth.

Aragami is one of those stealth games that throw the action in the other plan and which are completely focused on sneaking. And this is not any kind of sneaking - namely, in this game you will have the opportunity to control the shadows and to teleport between them.

This game will remind of Dishonored, but Aragami will also recall the fantastic Mark of the Ninja, remembering that you also control the ninja that runs between clearly defined shadows, avoiding opponents (when they do not eliminate them one by one with their katana), but also Tenchu, since this is also a stealth title in which you will hurt the areas of feudal Japan.

But let's go back to the above mentioned shadows and the ways in which they are incorporated into the game itself. First of all, the stealth system mostly relies on them, so that when you are in the shadow, your adversaries will not see you until you reach them a few meters. Also in the shadows you will be charged a special Shadow Essence scale, which allows you to teleport in any shadow, regardless of whether you are currently in the dark or in the light (by the way, it's worth noting that the Shadow Essence scale will be empty whenever you come in direct light sources, such as enemy flags or lanterns with which the levels are decorated).

In addition, Shadow Essence will also allow you to create temporary shadows on any surface in the game, which opens up the possibility, for example, to teleport on the roof of a nearby temple by creating a shadow there, or crossing the moonlighted meadow after in its midst you create a shadow that you can teleport before teleporting into a natural shadow at the other end of the meadow.

The interface of the game is almost completely integrated into her world - the Shadow Essence scale is thus represented by special patterns on your character's mask that glows in the dark, while in the middle of the mantle is placed the mark of the currently selected Shadow Technique skill, which also gives you to know how many times You can activate that skill.

With Shadow Essence and related skills, Aragami also offers a set of special Shadow Techniques skills such as temporary invisibility, kuna daggers with which you can shoot remote opponents or create a kind of black holes in which you can suck your opponents. Of course, Shadow Techniques skills will have to be unlocked one at a time, but unlike many other modern games, you will not need XP points, but special ancient scrolls hidden at levels.

And when I'm already in the skills, I can not but point out the most impressive among them - Shadow Kill. Namely, when you cling to your opponent, instead of the usual elimination, you can opt for a special Shadow Kill attack, which will result in a huge dragon-shadow that will emerge from the ground and opponents will bite for the head, after which they will pull it back to the underworld, automatically removing his body and reducing the chances of your opponents discovering and raising an alert.

All of these skills will allow you to play with opponents with which you can not fight face to face, as one of their quick attacks - whether they are close or long-range - is enough to kill you. Therefore, the game will teach you how to keep a shadow in the first minutes, carefully sniffing from one to the other and analyzing the options available to you, which are reduced to whether you eliminate the opponents (quietly and in the dark) it would make it easier for you to reach the goal, or you will completely circumvent and save them (by being quiet and staying in the dark). And since the game does not use any XP system and unlocks new skills by collecting these mystical rolls, players who sneak and avoid opponents will have no advantage over those who like to quietly eliminate all the threats they find themselves on the go.

And best of all, in Aragami there will be more types of stealth lovers, because you can improve the overhead character from the very beginning the way you want - more aggressive players will be able to choose offensive skills, those defensible will opt for defense, while they will who like to combine the offensive and defensive style of being able to do so with the skills offered. And for whatever skills you can choose and whatever you decide to combine, you can be sure that you will easily find your way through the levels of the game to the ultimate goal, regardless of whether it's simply reaching to a certain point, deactivating the light barriers which prevent you from progressing, or eliminating certain opponents, if you have already decided to kill them before you move to the next level.

The truth is for the will, the opponents along which you will sneeze and are not very bright (you can eliminate one guard in the immediate vicinity of the other, but until that other person sees you, whether it is the corpse of one of your colleagues, everything it will do is come to investigate the noise he has heard), even though they have their moments (when the guards with arches and arrows are watching you, the arrows with light magic will light up that will illuminate the dark areas and make it difficult for you to escape or further snooping, while the other guards will be thrown into the search for you).

But in spite of such adversaries, Aragami offers a solid level of challenge while trying to break through the area of shrouded guards and sources of light, whether you have decided to be aggressive and eliminate all the threats, which will bring you a type of medal at the end of the level, whether you have decided to spare them, which will be provided by another type of medal. And there is also a third type of medal, which will be given to players who do not raise any alarm, which can be achieved with an aggressive and pacifist style of playing and what many players could inspire to finish the game at least twice, in order to win all possible medals . 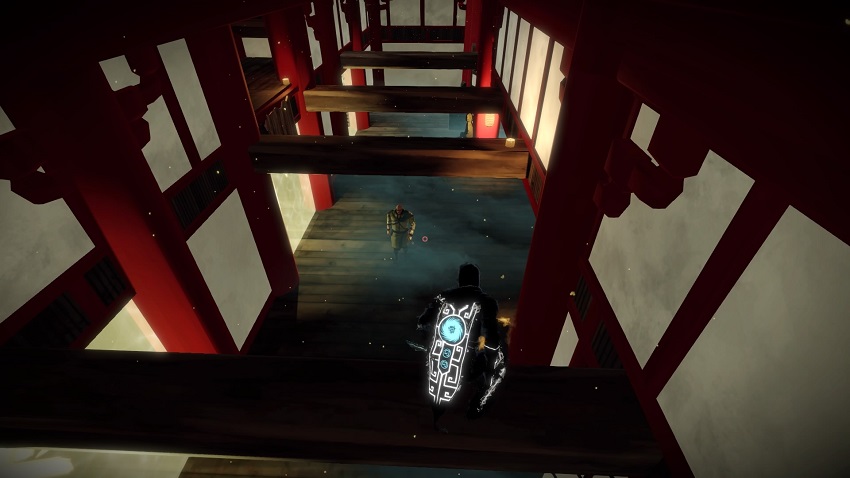 From a visual aspect, the game looks quite decent, although it is technically somewhat weaker than artistic, especially when considering the fact that it is developed on the Unity engine, which is traditionally hilarious on PlayStation 4. Framerate will initially be better and more stable than at later levels, which are not only larger and more architectonic than complex, but also significantly richer opponents (for the record, although it was annoying to me, the framerates never became an insurmountable obstacle to enjoying the game) . Also, I recommend playing with graphical options and setting gamma / brightness, as it seems to me that certain levels in default settings are somewhat lighter than they should be.

Rate this article Review of the game: Aragami

good job nothing to complain about or nothing to say bad. It was in a good order and had a ton of detail. I like your articles. I suggest you make more. All in all 10/10

Nice One the best

Not long ago i think i saw another aragami review, but this one is different enough!
Only one suggestion, make the Headers big next time!
Amazing article

We sort of have reviews about this one already, but I'll give it a pass.

good work, you make me want to play this game in the future