F1 2014 is the sixth Formula One racing game developed and published by Codemasters under the licence of the 2014 Formula One Season. The game was developed using the proprietary EGO Engine 3.0 and was released for the Xbox 360, Playstation 3 and PC on 21st(NA), 17th(UK) and 16th(AUS) October 2014. The game received mixed reviews and as of now it sits on a 77 % positive rating on the Steam Store. 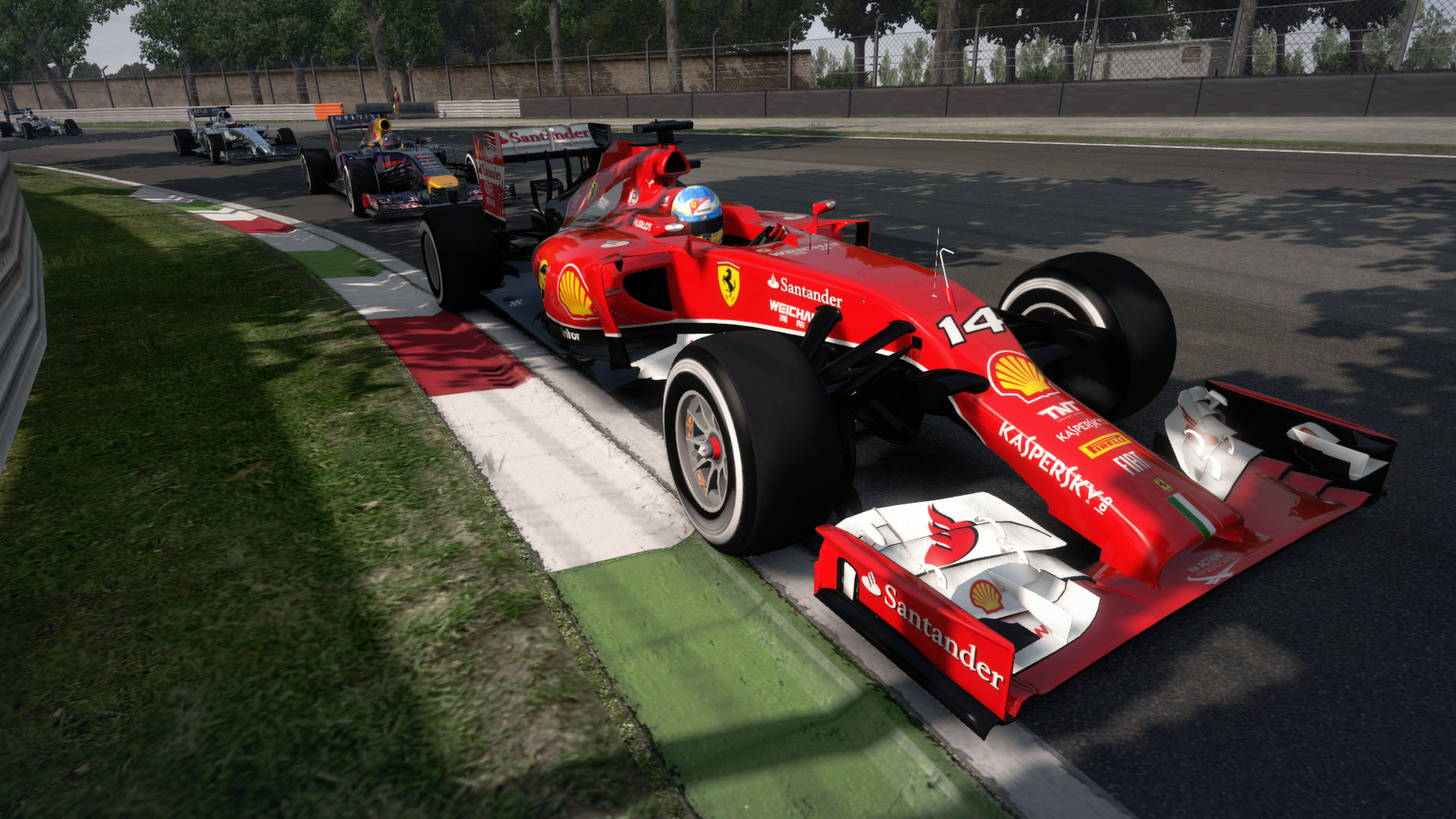 In order to stay on par with the real life Formula One 2014 season changes and regulation changes, codemasters F1 2014 featured a new revised engine with a different formula, that is introducing a new 1.6-litre turbocharged V6 engine that was adjoined with an ERS (Energy Recovery System) replacing KERS from 2013, which harvested energy from hot rear exhausts and brakes in the MGU-H Unit of the car. Whenever drivers applied brakes on corners and after long straights, energy harvested on the ERS automatically deployed energy and made the cars go even faster. Cars were incorporated with 8 semi-automatic gears, new taller rear wings for increased Drag Reduction system or DRS and lower Front wings with elongated noses at times. The F1 2014 game did not feature any classic car content pack like its predecessor but it still had the entire 2014 Formula 1 calender with all race events, teams and drivers. The Austrian Grand Prix was included in the calender after a ten year absence which is the home of Aston Martin Red Bull Racing. The calender also saw the inclusion of the Russian Grand Prix track Sochi Autodrom, the first Russian Grand Prix to be held in Russia and the Hockenheimring German track returned to the calender after a one year absence. 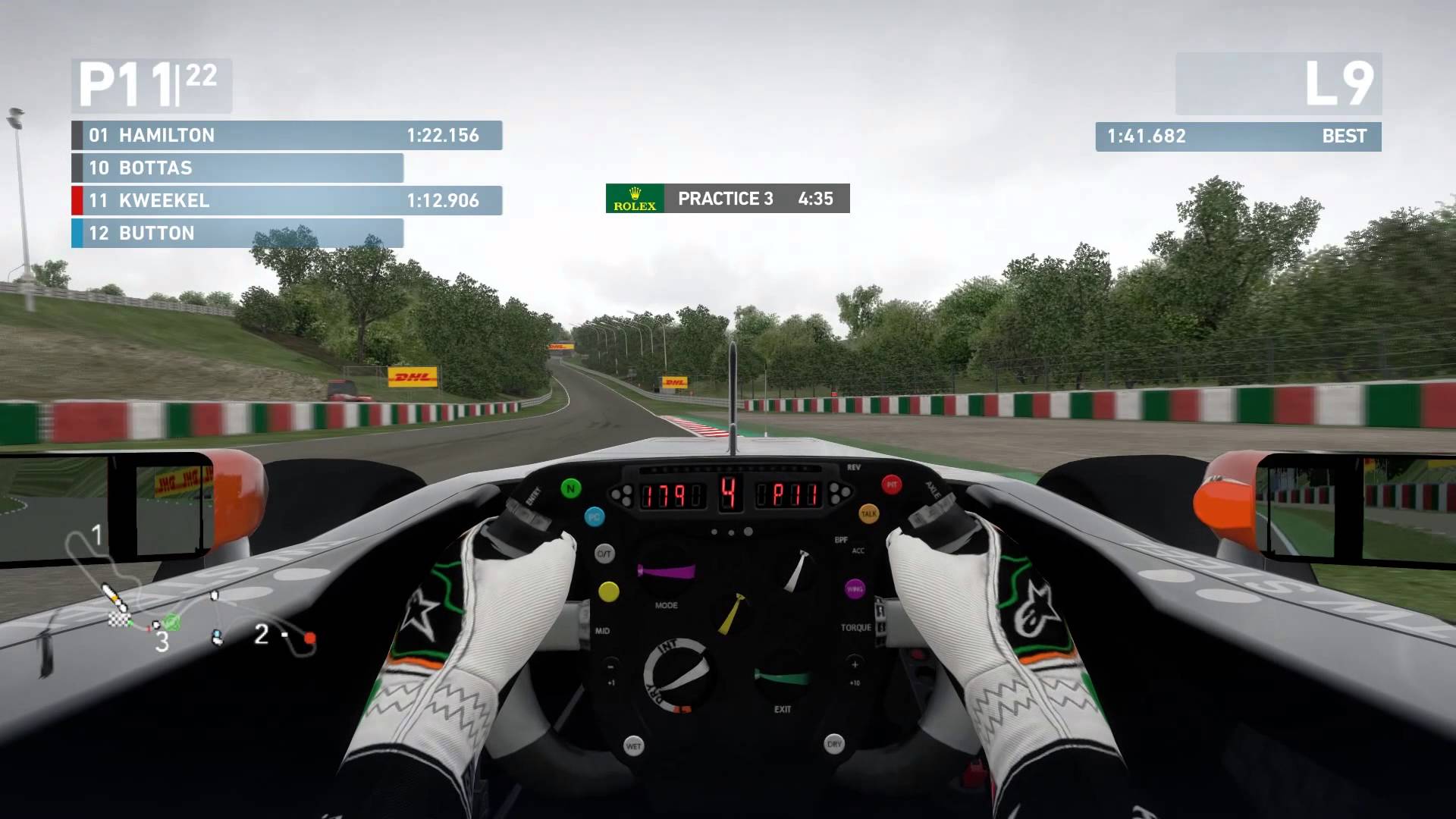 F1 2014 was announced on July 31st, 2014 and was not under development for the Playstation 4 and Xbox one. The career mode of the game allowed players to race on any team. In order to receive a PEGI 3 rating, the Williams FW36 was stripped off its Martini Racing logo. Career mode included 10 seasons where players get to be a Formula One driver taking part in the Official FIA Formula One Championship and all the 19 Tracks were available with Abu Dhabi being the finale and a Double points race. The game had sim racing mechanics such as tyre wear, fuel management, different engine modes and brake bias modes in order for the cars to be more efficient with fuel and to avoid them from locking up when braking in order to preserve the lifespan of the tyres. The game's damage model was very limited with players taking Front Wing damage when coming under contact which depleted their speed in high speed corners and rear wing damage resulted in an unstable rear end. Tyres varied from primes which had longer life span but slower speed, option tyres had shorter lifespan and faster speed, wet and intermediate tyres were used in rainy conditions. There are certain DRS activation zones in the tracks that drivers can take advantage of if they are within one second of the next car in front, if so drivers can activate DRS and reach increased speeds for overtaking. However, dirty air flowing from the car in front made life harder for the cars chasing making them drop their speed as engines grew hotter. But in tracks which has cool weather, drivers did enjoy the benefits of slipstreams which helped them slingshot past the cars in front. Drivers had different options to choose from with a lot of different pit stop strategies as fresher tyres were much faster and provided far superior grip than newer tyres. 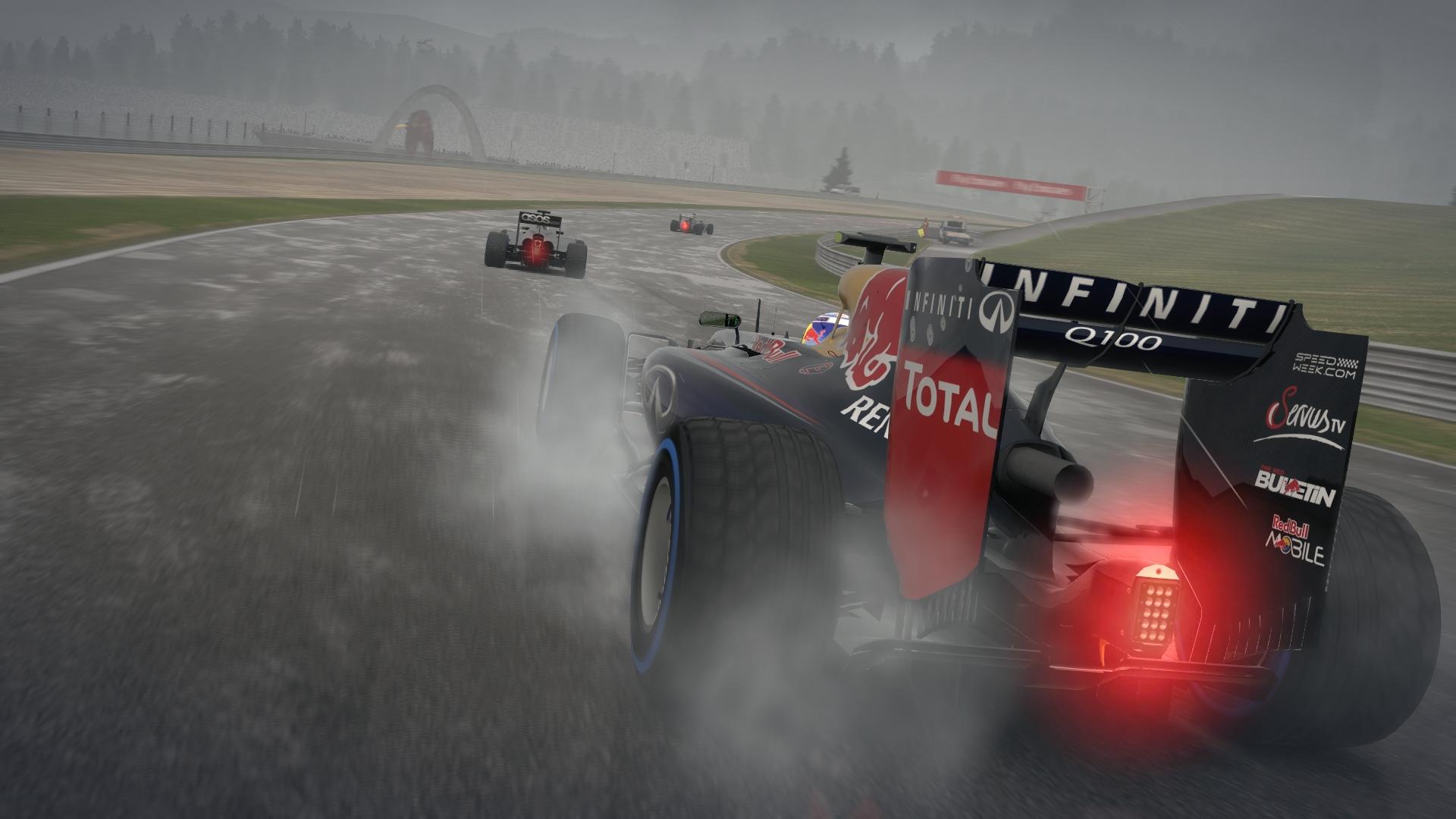 F1 2014 has a new driver evaluation system which helps players in deciding what difficulty level they are fitted to along with a whole array of driver assist, braking assist, race line assists that players may or may not decide to turn off. Sim racers prefer to go full hardcode with no assists which is daring, rewarding and much more fun once people get used to it. F1 2014 has Gamemodes such as scenario Modes where players can relive past rivalries and races where they duel as rivals, Enhanced Full Season or Shorter Season Career Modes. Co-Op returns as well as Split-screen in F1 2014 along with Multiplayer and an integrated RACENET technology which tracks and showcases player's stats and provides new online challenges. A much better refined and harder handling mechanism was introduced for gamepad users for a better and authentic racing experience. 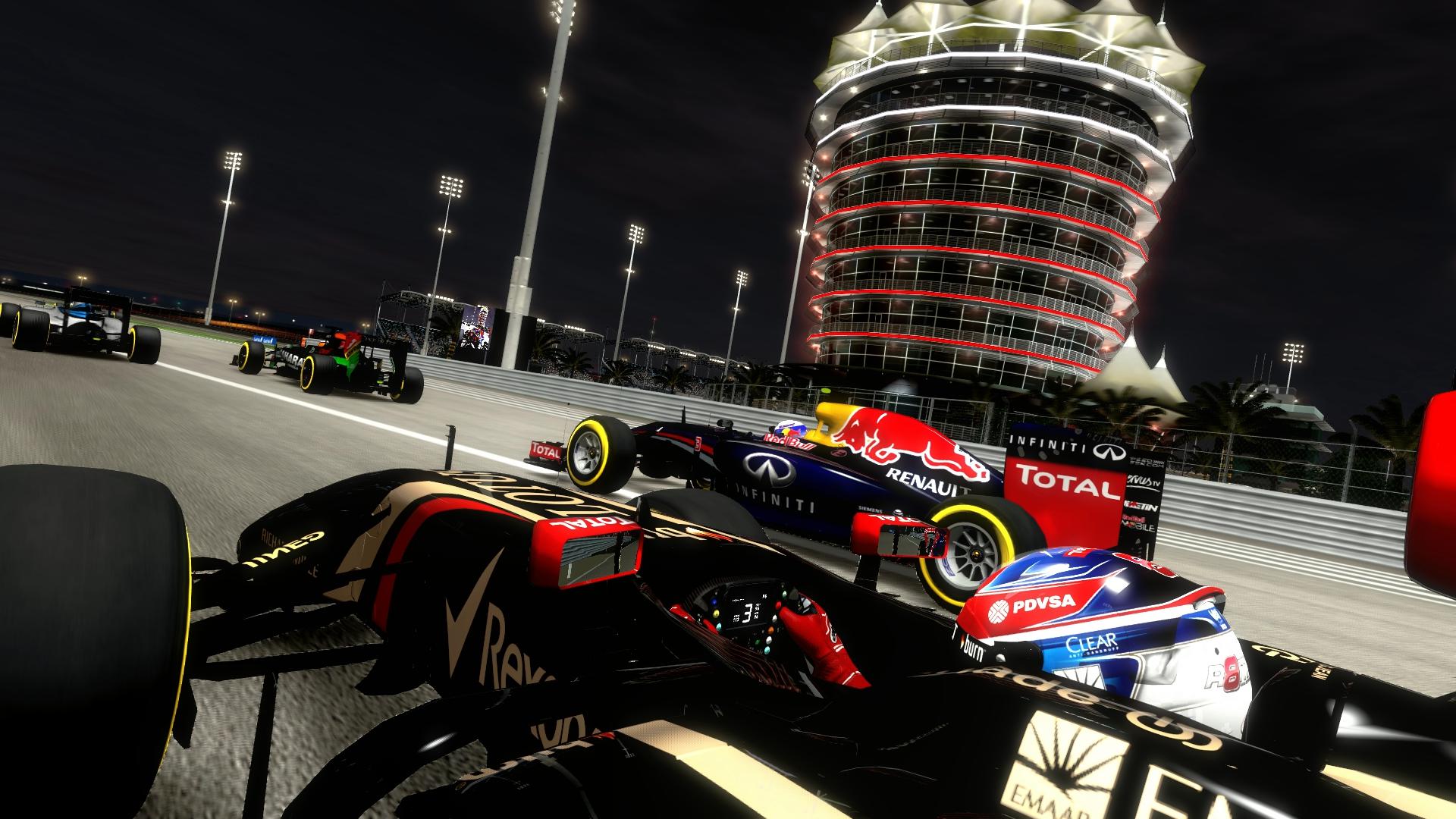 Tho i am not really a fan of the new turbocharged genre of Formula One but as per rumours many speculated that the reason FIA took away KERS was because it gave an unnecessary Traction control in cars while getting into power when accelerating. The cars sound not so great compared to their previous predecessors. Much more enhanced and better ways could have been implimented in the turbocharged genre of Formula One but sometimes thats the way it goes. Lewis Hamilton is really OP in the game as he will win if not all, at least 95 % of the races by a sheer margin of 30-40 seconds with the Mercedes car as per my experience from driving in Legend AI. My score for the game is average. 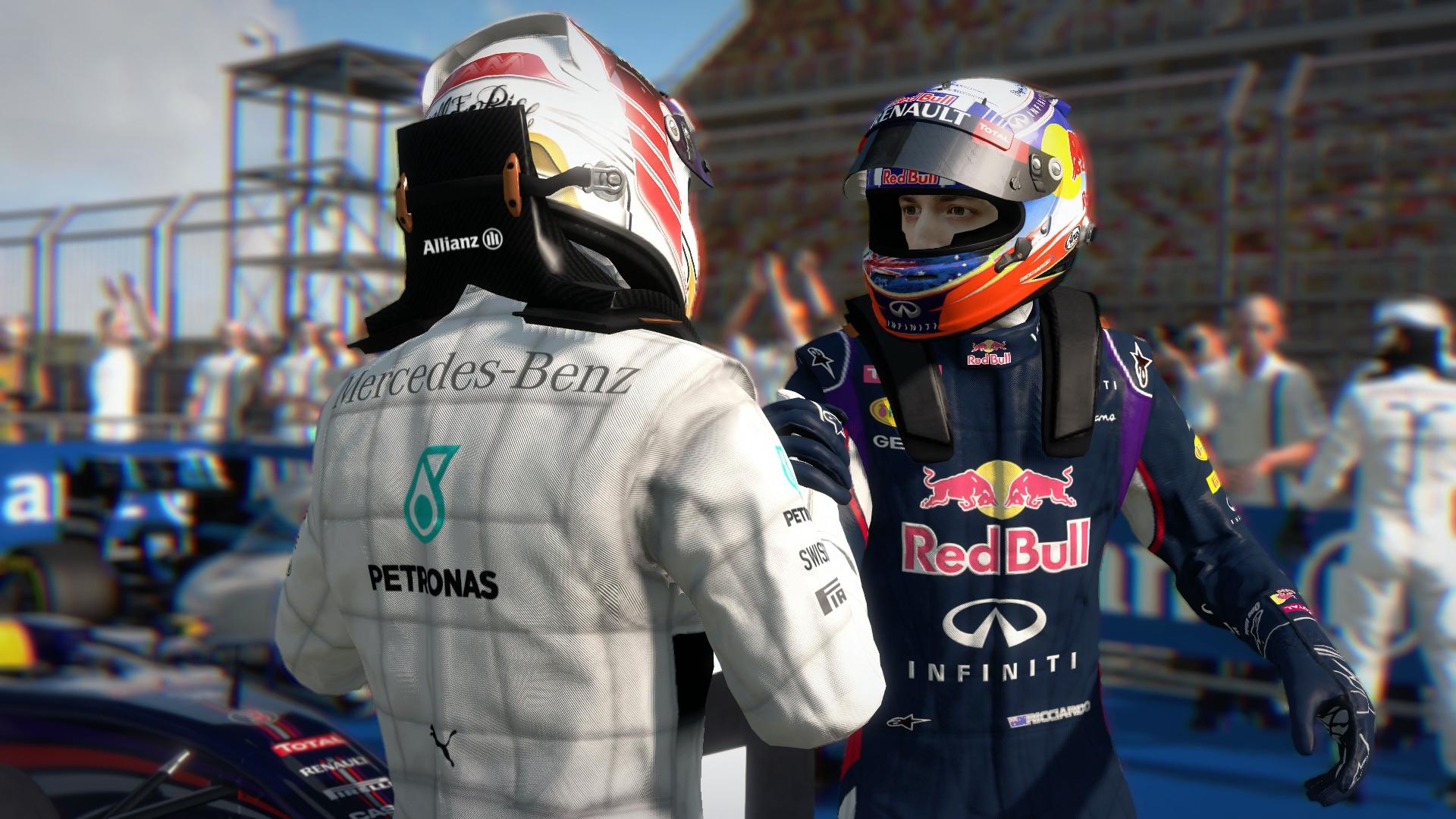