Rate this article "My Domina Review"

This is my personal review for a 2017 pixel art-rogue like-strategy-simulation game. In this review I will write what I thought of it.

As I already stated before Domina is a mix of many genres and normally it's hard to pull off a good game combining many genres, but DorphinBarn, an indie developer, has done it perfectly. This game is all about managing your gladiator "Ludus", which is an Ancient Rome gladiator school. In this game, the main character is female, which surprised me at first, but in my opinion, there would be no different if it was made. The goal of the game is to collect and train your gladiators for a big fight after 365 days or a year. You can not only customize what training does the gladiator do, but also buy him gear, which makes him stronger. In the game, there is also a huge variety of employees that you can hire to boost the gladiators' training speed, heal them after battles, build structures, repair armor or create food items. 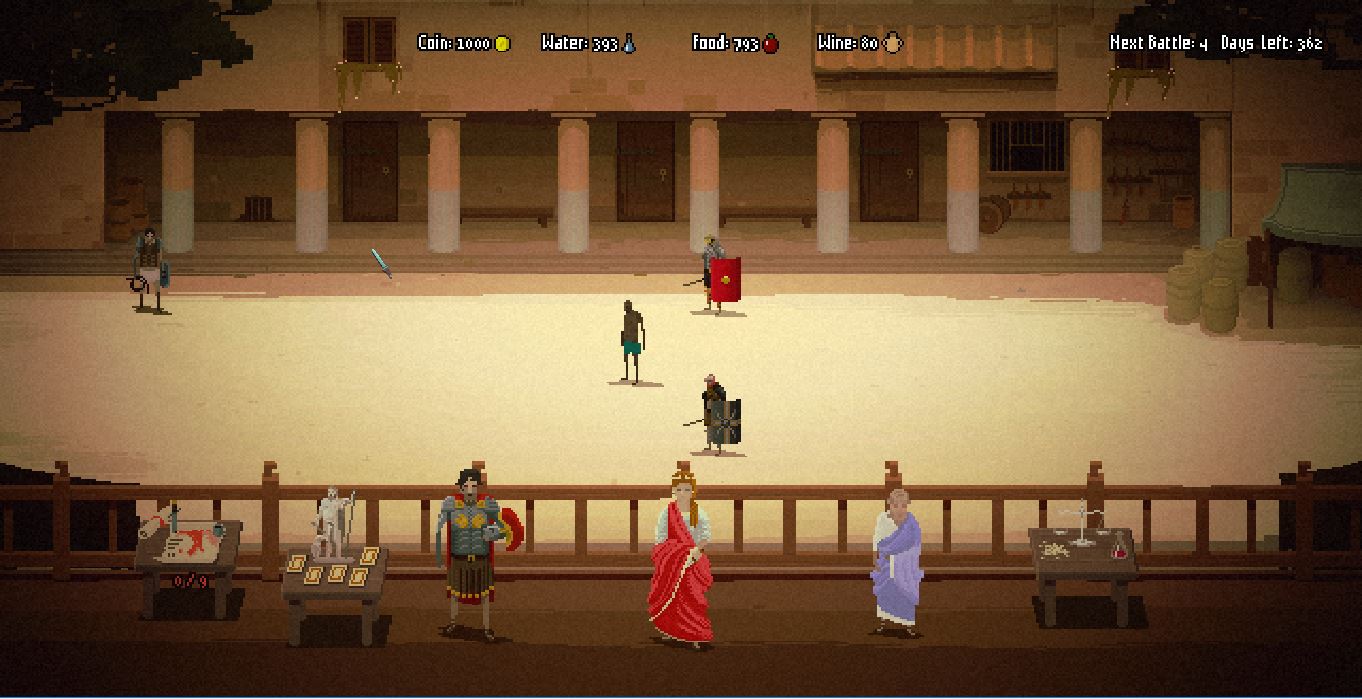 There are three fighter classes in the game, which uses different weapons: Murmillo, Thraex, and Retiarius. Murmillo is special for the fighter's double yielded weapons, which can do insane damage in a little amount of time. Thraex is the class that you have from the beginning of the game without the need to research it first. It is fairly balanced and has no special distinctive features. Retiarius is the third and my favorite class. The fighter uses a spear and a net to tackle the enemy and stab him to death. The most important feature of this class is its high mobility, but it has to sacrifice half of its armor. 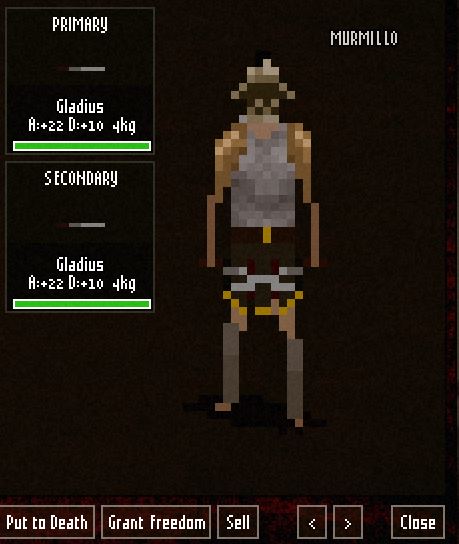 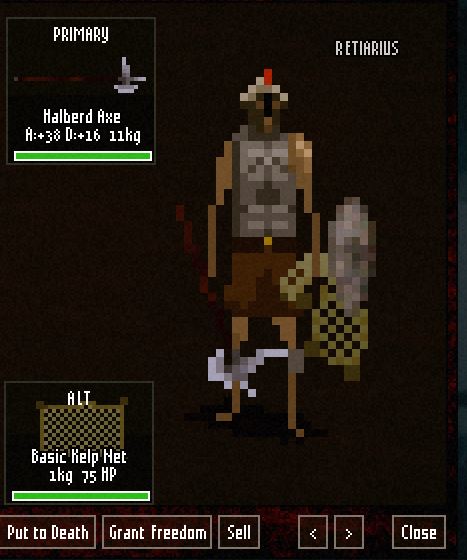 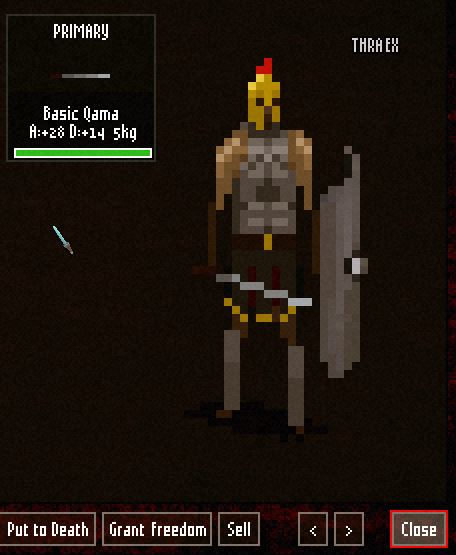 Once every 10 days, there is a local fight that you can attend to level up your gladiator's stats and win money, of course, if you win. For me, those fights were the best part of the game, because I could evaluate if my gladiator would win or not, but there was always a random factor, which caused him to die and it would always be frustrating and normally I would restart the game then. Although, even if that happens, I wouldn't stop playing and I would try again, and again, and again until I get that almost perfect playthrough just to lose the last fight, therefore the entire game. :/ 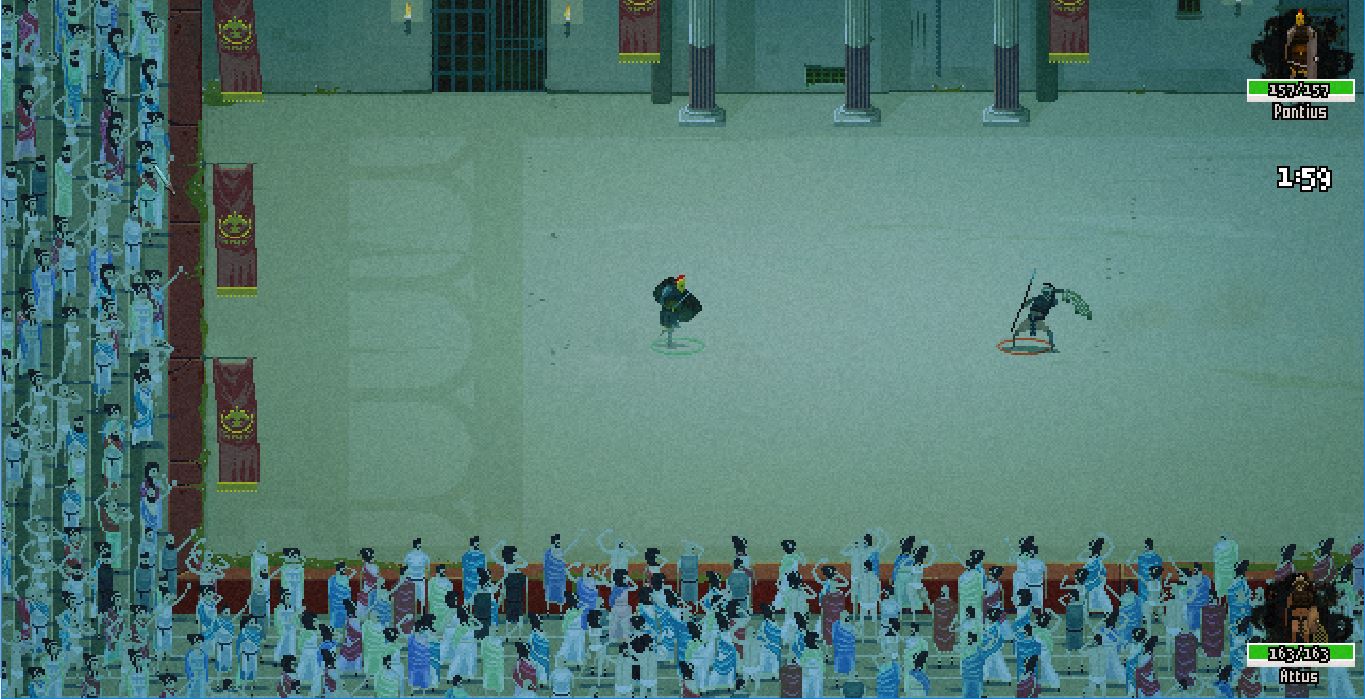 There are also two AI characters called the "Legate" and the "Magistrate" (left and right from the lady), which are very important because always one of them hosts the daily fight. Based on how satisfied they are with you, they will make your life easier or more difficult, so you have to make sure you are on good terms with both.

Once every about 20 days there is a random event, which normally gives you a decision to satisfy the Legate and anger the Magistrate or do the opposite or even, in rarer cases you can satisfy both or anger both, which is up to you. Probably the most annoying part about these events is that sometime in the game the Legate's or Magistrate's ex-gladiator cousin comes and demands to fight your strongest gladiator (and always wins), which is very lame because it makes you feel devastated. That fight could only be avoided if you are in very good terms with whoever's cousin came over or by having an architect hired that had built private quarters and letting your best gladiator stay in it, which then means that the second strongest free gladiator would need to fight him. 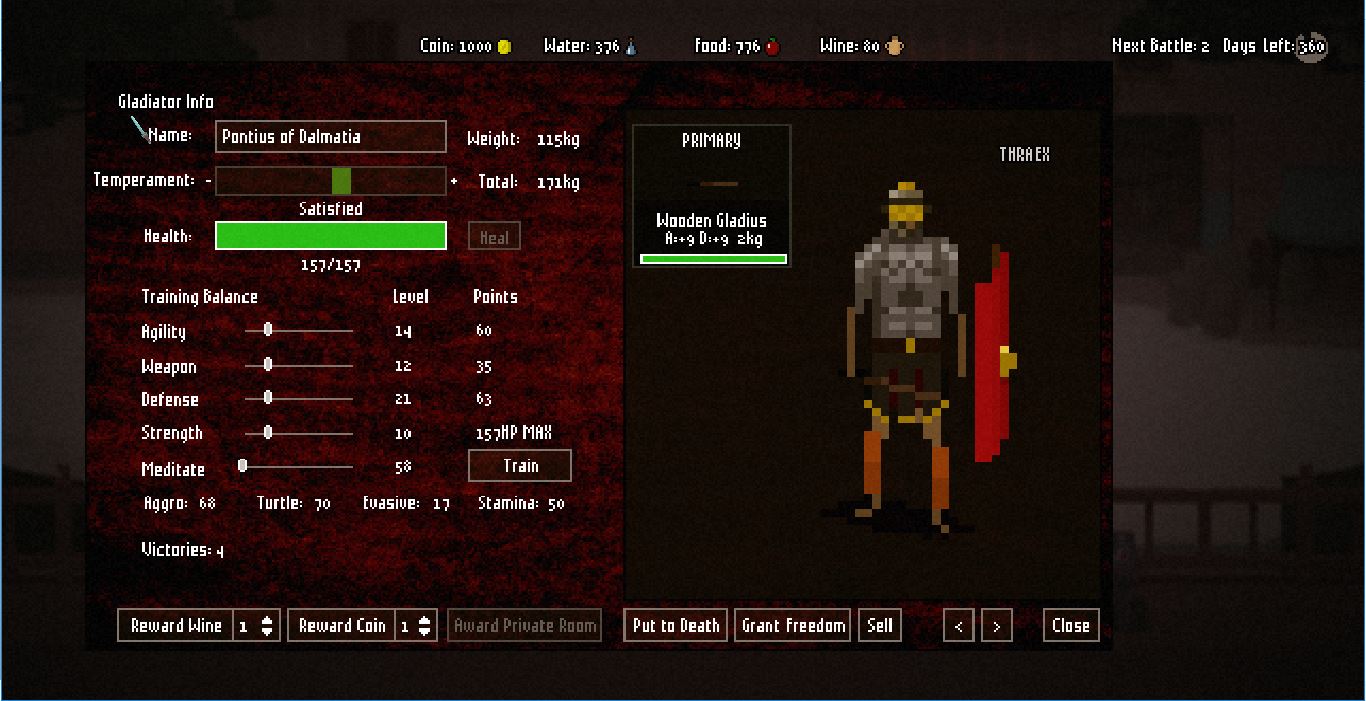 This game has a ton of content, there are many features of this game that I haven't written here, but I think it's best to see them yourselves. I think that the 9 euro price on steam, which during sales falls to 3.5 euro is definitely reasonable and I completely recommend it to all pixel graphic violence and gladiator game lovers!

Thanks for reading and have a great day!

Rate this article My Domina Review

I'm not a big fan of pixel art games, but I like the gladitor theme, and the roge like-strategy-simulation combo surely sounds interesting. Three gladiator classes are a bit few imho, the game would be better with more classes.

My friend username is PixelatedWeirdo lol.