Heroes & Generals is a free-to-play mix of FPS and RTS. Today I'll try to cover the core elements of the game.

I am a "Germany main" so I beg for pardon if the screenshots below show mostly the German part of the game.

(I'm resubmitting this article, since the first time I tried to post it, it was rejected for spelling errors, this is the fixed version.)

1. Factions
In the game, you will find that (currently) there are 3 factions: Germany, United States of America and the Soviet Union. Often people would prioritize playing for only one faction, but you're free to play for all 3 of them if you so desire.

Each character can advance through the levels independently. You can also buy any number of characters from each faction. For example, You can own 3 German Infantrymen, 4 Soviet Fighter Pilots, and 2 USA Paratroopers, at the same time, without any conflicts. You can also switch between each character whenever you want. (Out of combat of course.) Each separate character will level up his medals individually. After a certain level, you can promote any 5 of the "Hero" classes into a "General". After you do this-this character is locked for playing ONLY in the RTS element of the game. 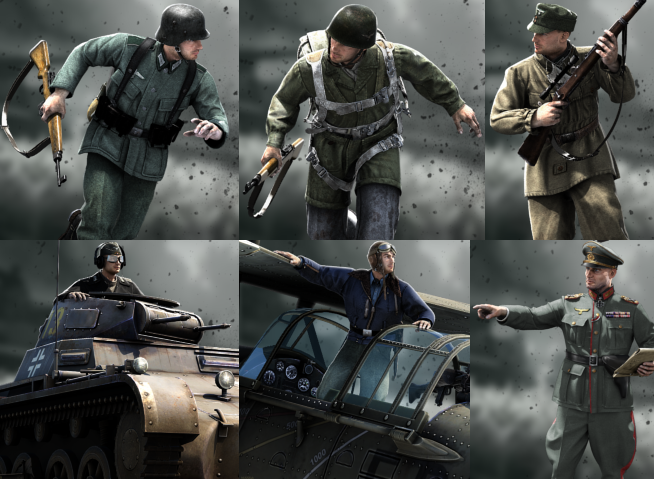 (A slideshow of the German character classes)


3. Weapons
The game includes many WW2-Era weapons such as MP 40, M1 Garand, PPSH, Thompson, Kar 98, MG 42 and so on. Most of the weapons can also be customized to fit your playstyle with different mods. They also degrade with use and as such, you have to pay for repairing them. (The more mods you have on your weapons, the more expensive the repair will be) Each faction is locked to its specific faction weapons (with some exceptions) For example a German infantryman can carry MP 40, Luger P08, MG 34 and so on, while an American infantryman can carry M1 Garand, M3 Grease Gun, M1903 Springfield and so on. Since the game features Tanks and Planes, there's also Anti Tank weapons such as Panzerfausts (which can be grabbed from specific places on the map), H3 Magnetic mines, RPG 43 grenades, Bazookas and so on. There are also Anti Air gun emplacements scattered around the maps. The AA emplacements vary, depending on what faction originally controlled the point. After an emplacement has been destroyed, it will spawn again after some time, but its type will be tied to whatever faction controls the point currently. 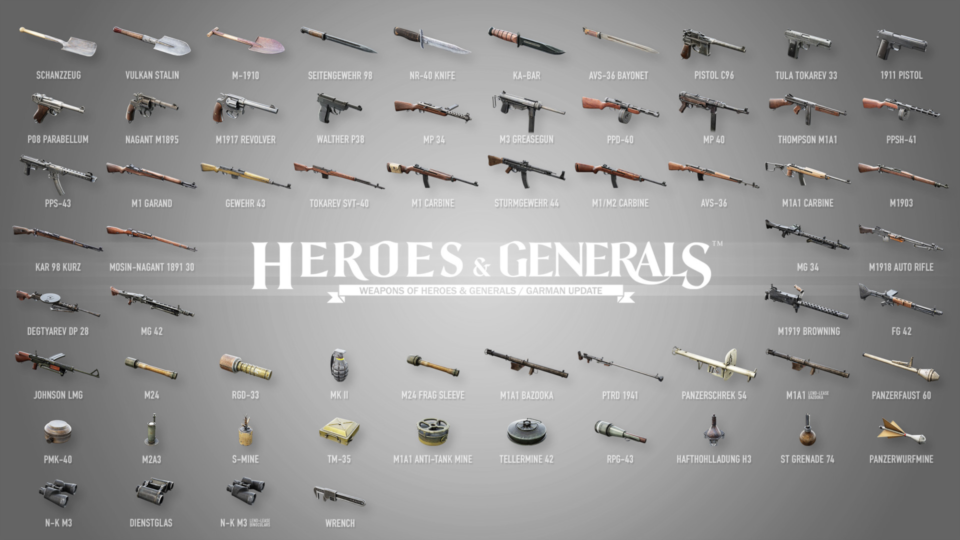 (Most of the weapons currently in the game)


4. Vehicles
The game has tons of vehicles in it like:
- 2 Person Motorcycles
- Cars
- Trucks
- Tanks
- Planes
Each type of vehicle is locked to a specific class of a "Hero". For example, Infantryman can spawn most of the (non-tank) vehicle types, while the Paratrooper can't spawn any vehicles at the start of the fight. However, every "Hero" class can use ANY vehicle they come across. 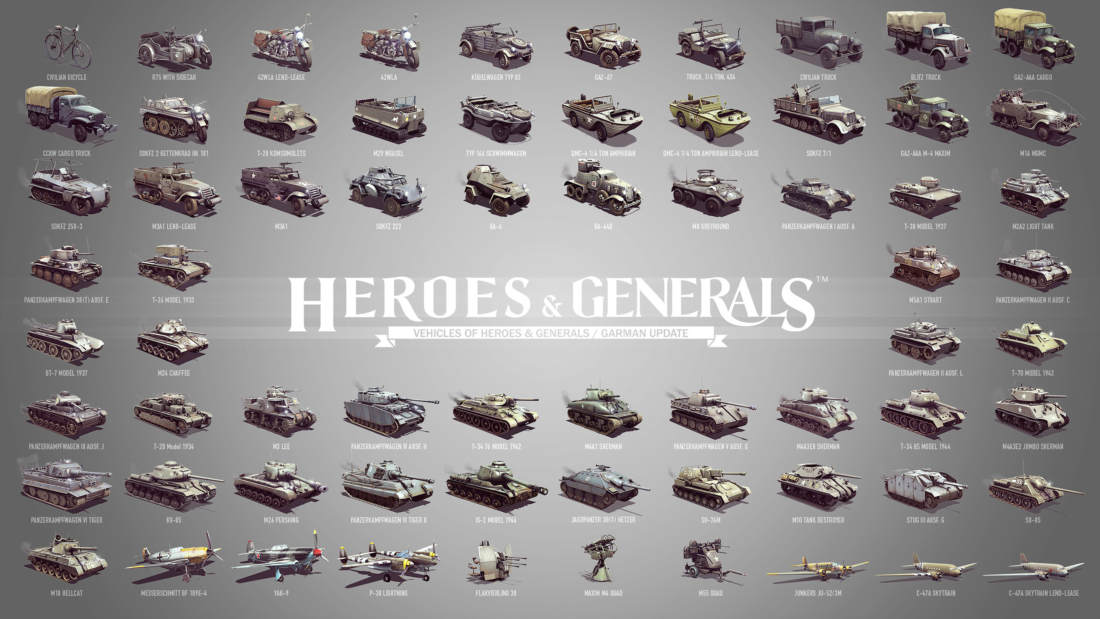 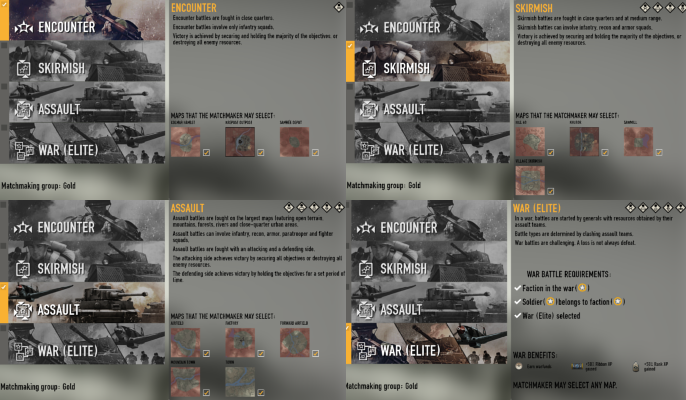 (A chart of the game modes)


6. WAR!
War is a separate game mode in which the players get to play with their "Generals" as well as their "Heroes". And before you ask... every faction is on its own, meaning that the USA and the Soviet Union will fight each other. This is implemented for the sake of balance. In this mode, you receive 50% more experience toward your medals and your rank. Here you can buy Assault Teams with your Warfunds. (I will explain about them in point 8) You can use your assault teams and move them around the map in order to create battles. This game mode can include every map from the game and it's fought over the map of Europe and most of Russia. Every faction has 2 starting towns. There are 23 Major Towns. The objective for each faction is to capture AT LEAST 15 of them, in order to win the War. There are also smaller points on the map which you have to capture in order to move your ATs around. If an enemy AT meets your faction's AT at the same point on the map, a battle will be activated and depending on the circumstances it might take place or not. I should also mention that WAR battles might not be balanced, because they're created by the players themselves by moving around their own ATs.

(The Big Stars are the Major Towns you have to capture, the small dots you see are points controlled either by you or by your enemies and the bright flashing points you see are places where a battle might take place if enough people sign up for it in the Matchmaker.)


7. Ribbons and Unlockables
Each "Hero" and "General" will have their own set of ribbons, which the player will level up by playing with the characters. These ribbons unlock a different kind of equipment, depending on the ribbon itself. For example, Infantry Ribbon unlocks most starting class weapons for a "Hero" meaning that an Infantryman will unlock SMG, Anti Tank, MG and so on type of weapons, by using the starter semi-auto rifle or the bolt action rifle (which is unlocked by the same ribbon). If you wish to unlock higher tier weapons you have to use the lower tier ones first. Here's an example of ribbons: 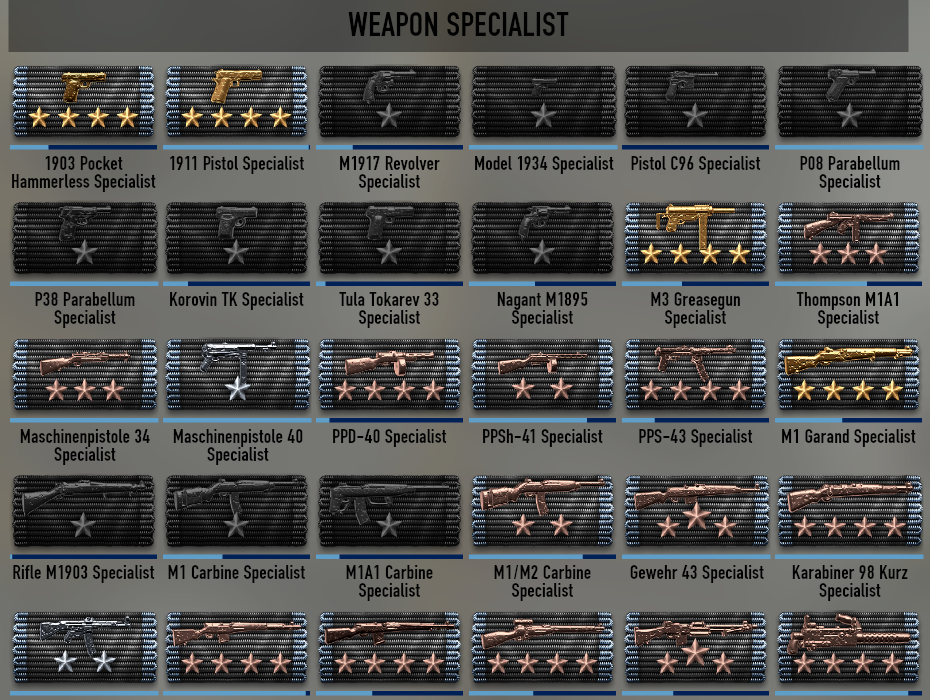 (That's taken from my only USA Infantryman so far. Notice what weapons I've been using more often. Gold > Silver > Bronze with the Bronze standing as being used less often. The more you use a weapon, the more mods you will be able to unlock for it.)

Here are the Combat Badges. They're unlocked through the same way, you unlock your equipment. They can be used on every one of your "Heroes" and "Generals". 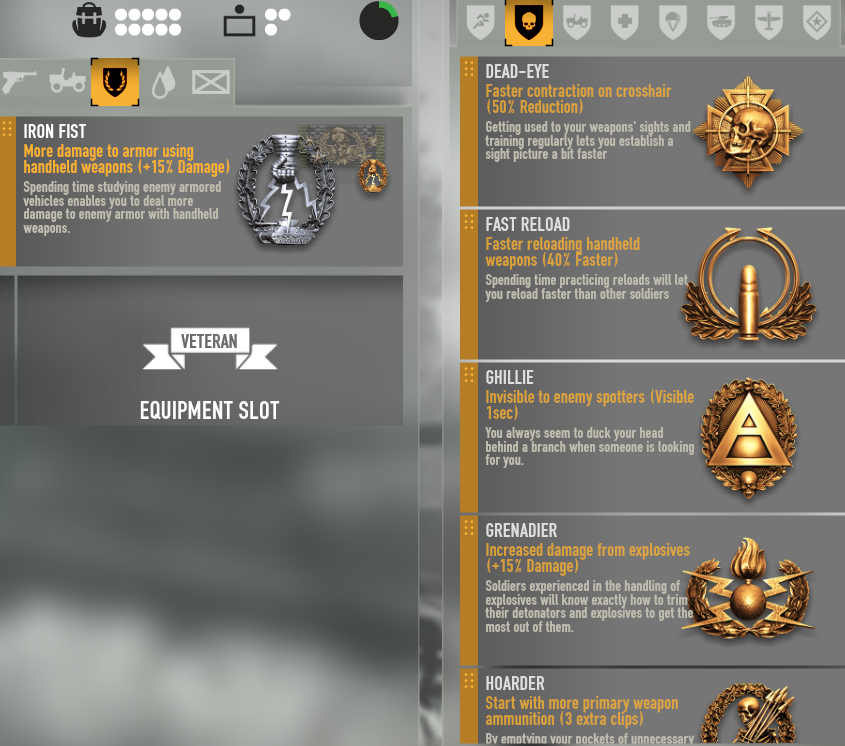 (They give you different advantages, depending on the type of the badge)


8. In-game currencies
The game has 3 (previously 4 currencies):
- Credits: Won by simply playing the game and used for the purchase of almost anything in the game, with exception of Assault Teams.
- Gold: Can be bought using real money, in order to do the same as with the credits, but without actually playing the game (eg, Pay to Progress)
- Warfunds: These are won from playing in the WAR as a "Hero" and by using your "General"s ATs. (Other real-life players using your ATs to spawn and kill/destroy enemy resources) You get paid by the amount they're able to kill/destroy, meaning that your winnings are completely dependent on the skills of the players.
- Warbonds: They're no longer used because they interfered with a law about gambling, so the game developers had to get rid of them.

(Here's my own "Fortune". The Veteran Membership gives you access to extra goodies like more Weapon slots, extra Combat Badge, more Warfunds per battle and so on.)

I hope that I was clear enough, without being too boring. If I was boring... then please forgive me.
Also... please excuse the quality of the edits on some of these pictures, if they don't meet your expectations.

A note: As I've already said above, this is a re-upload of my own rejected article, after fixing the mistakes.

I think this game needs a try thank you

Good concept but the game itself is actually pretty boring.

wow good job maybey i will play this game

Good Article. Everything arranged in a proper order.

Well written article (very detailed), thumbs up for you dude!

Unfortunately it's not a good game for me. I've bad FPS & my laptop's processor it's not good for the game.

Nicely written article.
Is the game like War Thunder, meaning planes get to destroy tank players on the ground? You should add that to the article, since this determines whether someone like me would even try the game. The presence of planes in tank battles is the reason I DON'T play War Thunder.

good for a f2p