Note: Before the starting of the article I should say sorry for some grammar mistakes I may have in it , because I am not native but I am trying my best for you , hope you enjoy! :)

The Jurassic Park series has been producing dozens of games since its inception, divided into two categories, a series of action games and a series of strategy games. This franchise was for years free from having a good video game, and despite the fact that it's been a very successful rescue, Jurassic World did not launch a dedicated game for years to come. Among these, Lego Jurassic was featured in the brilliant title, with an interesting overview of all the cinematic titles of the cinematic series, but eventually it was announced that Jurassic games would return to their originality and a Jurassic World Evolution management strategy title. It's a way.
The Jurassic World Evolution game, as its name implies, is going to bring an evolution to the gamers, and seeing the name of the game maker, which has a particular skill in making strategic management games, brings the theme closer. The Frontier Developments studio, known as the Tycoon Tycoon gamers, has been well-known name and created many park management games. Now on the studio, the park is far more horrible than a playground or zoo. And the task of building a park to the extent of the Jurassic world has been given to them, let's see if Frontier's developers have been able to make that big grove right and reach out to the audience or want to force them into the gamer's mouth! 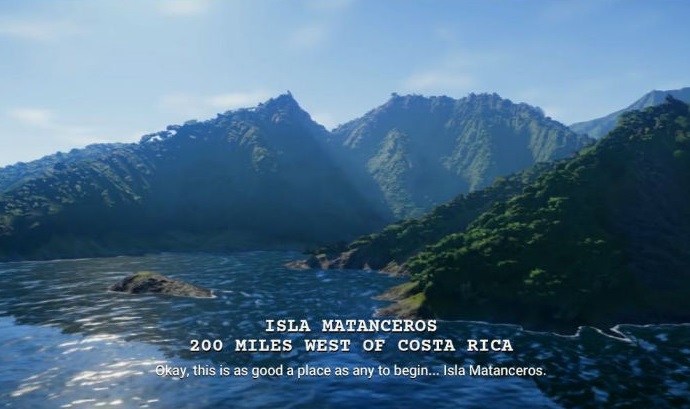 The creator of the late Jurassic Park, Michael Creighton, created from the depths of his mind and imagination a park in which humans, through modern technology, could recreate these gigantic beings from the fossils and traces of the time of the era of dinosaurs. Interestingly, Creighton later built science park on the side of artificial intelligence and robots, which we now know as the West World West. Michael's Dinosaur Park has been featured in a fantasy film at the top of the budget since 1993 and will be handed over to Jurassic World Evolution.

There are 5 islands throughout the game (in the second movie the five islands were small spikes), which will be opened for you respectively. By going to any island, there is a series of missions that should be completed so that you can reach the other islands and extend the domain of your park management territory. These missions include a number of projects, including the building of the building and the project, and bringing the park to N (unknown amount) in terms of profitability, and, of course, the creation and creation of dinosaurs. 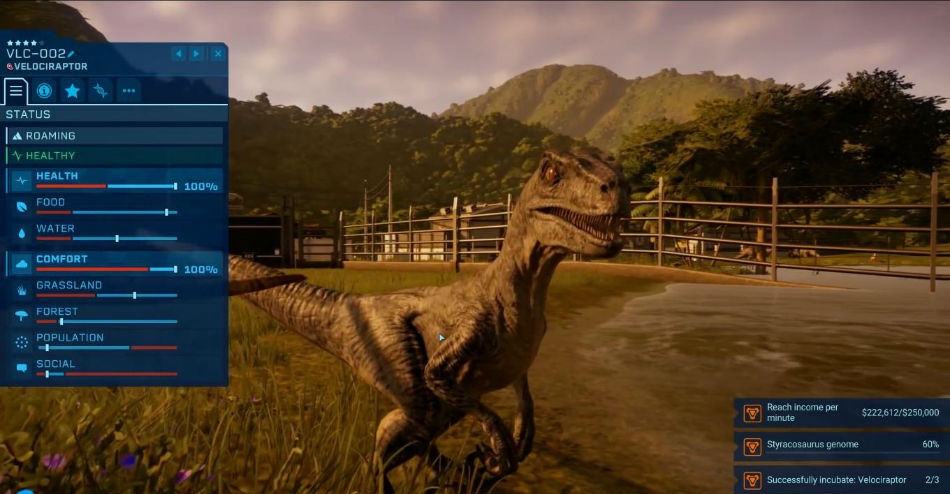 After the DNA is formed, the process of making the dinosaur is formed and you can choose, based on the options available to you, small details such as skin color and ... dinosaur.

After the dinosaur is made, we will see a small kinematic cut with beautiful background music that promises to bring the dinosaur into your park. I must say that all dinosaurs are not in a region, and to explore all of them, you have to go through the islands of the game and complete their missions.

Keeping the dinosaurs is overwhelming, they're getting too soon, and each one needs a series of food. Some are vegetarian and some carnivorous, and they must care for both forestry and meat carnivorous dinosaurs. Apart from these issues, dinosaurs often mimic and often try to escape from the environment you created for them. In this case, sometimes a dinosaur rushes out of safe space and attacks people and Jurassic Park fans! 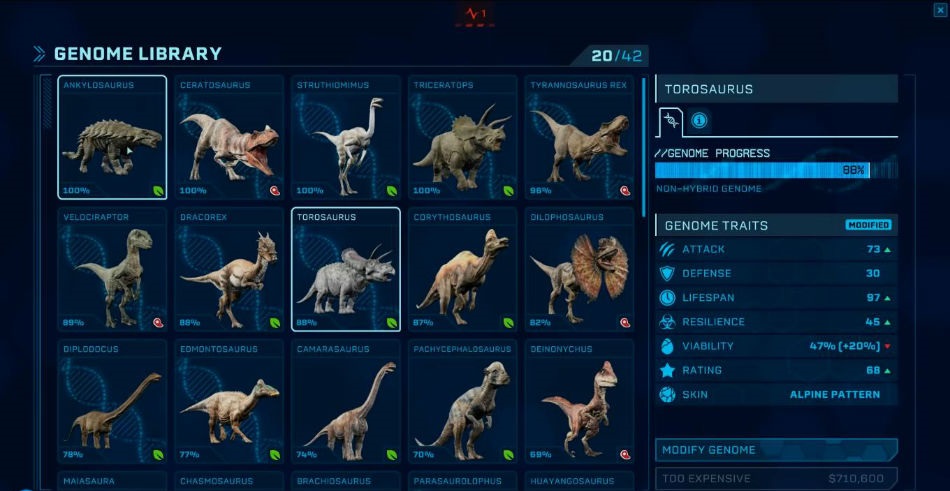 Keeping the dinosaurs is overwhelming, they're getting too soon, and each one needs a series of food. Some are vegetarian and some carnivorous, and they must care for both forestry and meat carnivorous dinosaurs. Apart from these issues, dinosaurs often mimic and often try to escape from the environment you created for them. In this case, sometimes a dinosaur rushes out of safe space and attacks people and Jurassic Park fans! 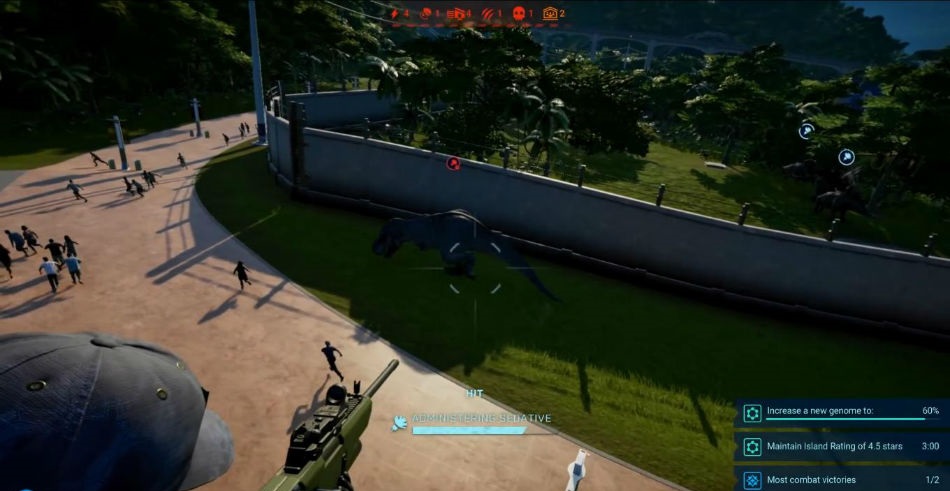 You can raise your sleeves and play in a action mini-game! Get down the dinosaur...
In this part of the game, sending special forces on a jeep or helicopter, you must uncover the dinosaur and bring him back to the safe environment and, of course, avoid financial and financial losses! Truly, the dinosaurs are strongly afraid of storms and storms, and when weather comes in this way, it's better to close your belt more tightly.

Also, when breeding dinosaurs, you need to be careful about how you breed and stand up, because they may horn each other and start fighting together. Of course sometimes your curiosity may cause you to want two dinosaurs to fall into each other and to betray each other, but you must note that, for example, Tiranavasvars in this game are priced every few million dollars and their battle with Each other that kills them will cause a huge financial loss to your management body! 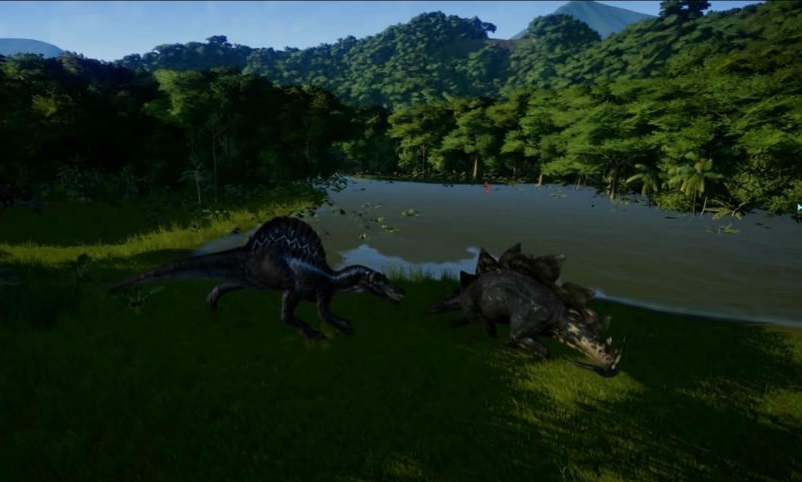 Basically, Jurassic World Evolution is a very difficult task, and money loss is easy and convenient. Play as much as you can, and you have to relax the head of the bag as much as you want to keep it. For example, for each building and research you are building, you need a unit of energy and electricity, and you need to make wiring from the unit to your buildings. Apart from the crushing nerves, this is a great deal of money for you, and worse, the construction in the game is a very long process, and there is no way to reject it (or so-called Skip) of this time-consuming process.

Ultimately, the way the team teamed up is that you can ride a personalized jeep and park in the Jurassic Park rather than gazing on the monitor page and multiplying it; a park full of spectators and dinosaurs, which usually leads to surfing. Seeing interesting scenes, though, surprisingly surprisingly, there's no trace of a child and child visitor anywhere in the game.

In concluding this section, let's take a few points, all of the above, the promise of a good game or, in the most pessimistic case, a modest upward game, but it must be admitted that Jurassic World Evolution is attractive on paper. And putting things in the gameplay section is said to be tedious and repetitive after a few hours. The Jurassic World Evolution game does not have the potential to stretch the gamer, and can not catch up with the elements within its 20-hour period, and it's all about it in the first two to three hours. 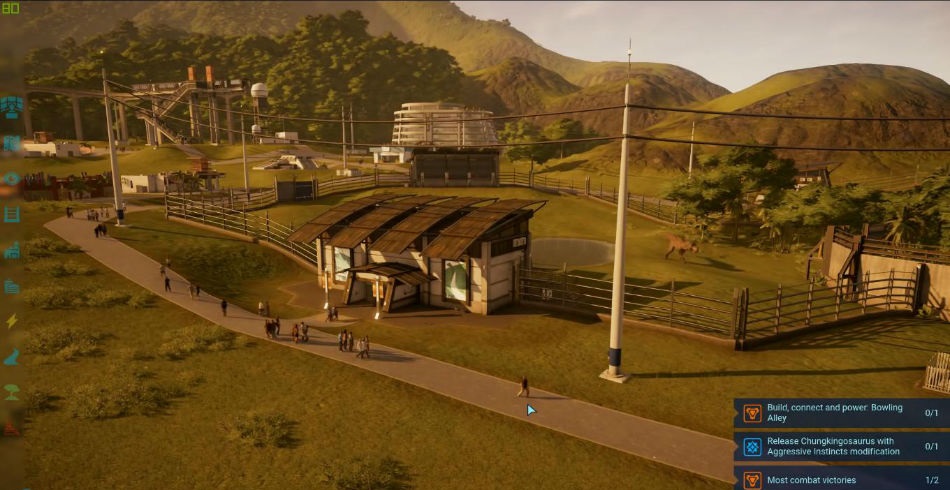 The graphics of the Jurassic World Evolution can also be said to be an eighth generation graphics, but not much more. Unlike pre-release trailers, promises of makers do not have extraordinary graphics and a good graphic design, which is not without technical bugs. The design of the dinosaurs, which are the main winning leaves of the game, is far better than the design of the environment and humans, but still walking some of these species is more like chicken than dinosaurs and their animations while fighting with each other is also very low and after some time Excitement of battle The two dinosaurs become the tedious sequence. The fact that the battle of two giant dinosaurs can turn into a dull sequence is itself a foot of art that has come to fruition from the gaming team.

The music of the game, fortunately, is the same as the music used in the film series, and all the musical parts of this feature film are licensed in the game. Apart from this, some movie actors have lent their voices to their characters in the game, most notably Jeff Goldbloom, and the narrator of the game story. These two themes can be interesting for fans of the Jurassic cinematic works, and their nostalgic sense will arouse them somewhat in part. 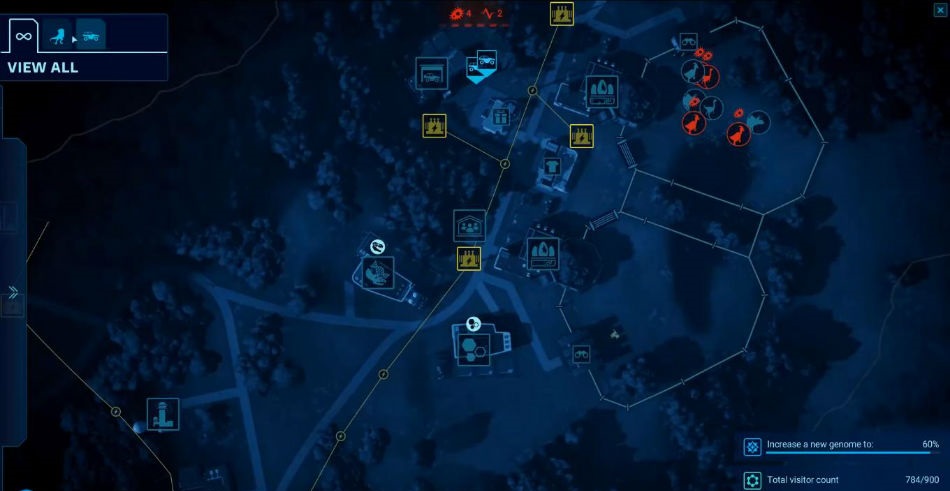 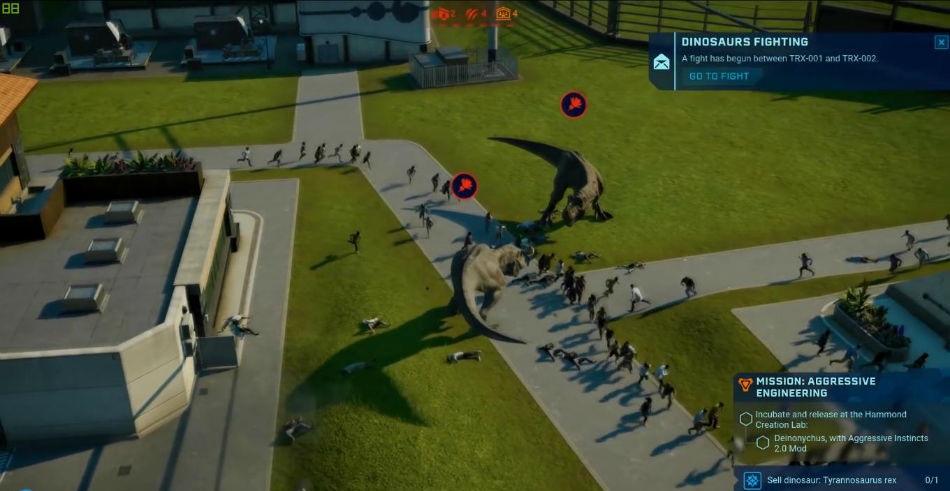 Essentially, playing a sequel strategy title, considering the nature of the keyboard and mouse, is a better experience than playing the same titles on the consoles. But as other gamers say, the consoles' gameplay also comes with a very sophisticated control, which is part of the Frontier studio, although the high price of the game ($ 55) can make gamers to buy the game to Make a retreat.

Jurassic World Evolution, unlike the new movie series that have been able to rebuild the Jurassic Park, can not keep up with this series of video games, and the curse that has ever been encountered by these dinosaurs in this field remains. Maybe it's time for Capcom to stop loneliness and obstinacy and create a new title for the Dino Crisis series, but it could be re-enriched with these huge lizards, and spent a full game of experience with them.

Interesting article, I must say

I'm jurassic park/world fan and i have this great game :D