Soccer, like life, is full of ups and downs. Curiously perhaps, the FIFA series is the best representation of this iconic phrase. While trying to show exactly "the ups and downs of the boleiros" in one of their most prominent ways, the story, called The Journey, the franchise has gone through ups and downs since switching its engine to the Frostbite in the search for greater realism.

The quality of FIFA 18 is unquestionable. The level of realism and presentation details, the stadium mood and TV broadcasting as well. The rhythm of the game has improved, although it still focuses more on the change of passes and the closed marking as in the previous edition. Here, it takes skill, knowing to play, to press and to kick with precision: all that is necessary to be a good football player.

It differs greatly from its competitor, preventing a direct comparison. The focus of each is different. There, the question of the taste for a more thoughtful and cadenced football, FIFA 18, or for a faster, fun and audacious one, PES 2018 enters in account.

In search of realism

It is undeniable that the Frostbite engine has brought improvements in the previous edition, especially in the realism of athletes and stadiums, but lacked adjustments that made FIFA 17 fall far short of what we expected. The game was truncated and the ball looked like it was on another planet (gravity was not good). However, an issue later, adjustments were made and left the game as we are accustomed.

The athletes are very similar to their real versions, including in the field movement. All very up-to-date in terms of haircuts, tattoos and more. As always in the franchise, the atmosphere of matches and broadcasts is reproduced with excellence. Everything is there, from the cry of the fans and celebrations, the camera angles and graphics of scores and results. Tiago Leifert and Caio Ribeiro, keeping the chemistry excellent, comment much more, especially specific touches of certain athletes, creating expectation for the match, be it a friendly, a tournament or online. I do not see two more names to narrate the franchise than the two. The dedication at work only reinforces the quality of the Brazilian version - which is also in the Switch. 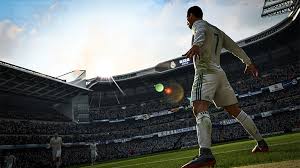 With the ball rolling, you have a more agile and enjoyable FIFA to play, but still, EA chose to keep the game more bureaucratic, focused on passing passes in the best style of English football - perhaps the main developers of the series are English ... It's quite different from PES, but it's two styles of game that can not be compared.

Frequently, the match is truncated in midfield, requiring a quick and accurate pass exchange. Something that I see as positive, but that can be seen as something bad, is that, because of this, the aggressive marking has become mandatory to win. Who does not squeeze the opponent, minimally closing the spaces and even forcing a stolen ball, will not get the three points. Because of this, it is even more important in this edition to use the body to protect the ball. Adding strong marking, body protection and quick pass swap, victory is guaranteed, but this, as I said, holds the match.

This environment favors teams from the English championship and others like PSG and Barcelona, but it leaves teams like Real Madrid - not to mention Brazilians, poor people - at a disadvantage, since they have players who work better with individual plays.

Moreover, this style does not make FIFA 18 a friendly game for that match with a friend at home on the sofa, something that PES 2018 can do much better. On the other hand, if they both manage to play, they have all the ingredients for an incredible match.

The kicks are better with correcting the gravity of the ball. It's good to fill the foot and this year there are more chances of goals from outside the area, but the kicks and creeps are much more efficient.

The continuation of women

Women's football, since FIFA 16, has been an excellent addition to the franchise. Not only does it give the opportunity for more women to identify themselves and want to play the game and to put more emphasis on the sport. In the game, everything changes. The speed of the game is different and, consequently, the pace of the match.

The bid here is to hold the ball more and play shorter passes. You kick well and you can hardly get caught by the goalie, unlike in men's football. It is something that pleases, brings variety and allows you to play as much against a friend as to make a World Cup.

I just think that since EA Sports is always looking for news with each edition of the franchise, it could bring teams of women's clubs, at least from the United States as a highlight for women's football. I think it's important to always keep an eye on that.

If the game requires prior knowledge to play, who wants to play alone or online has a lot to do next year. The big highlight is the return of the mode The Journey, completely dubbed this year, shows Alex Hunter already at the top but now having to deal with the difficulties of staying there, competition, fame and envy.

The story brings more decisions to be made in the best Mass Effect style of the good times. Now, these decisions influence the course of history as well as its performance in the field. You have to send minimally well, pursuing the minimum goals, to stay between the holders and get the title. The cool thing is that at the beginning of the story, the MLS, American league, has highlighted with Hunter joining a team there. The tempo of the novelinha is very pleasing and the rhythm makes us wonder what is going to happen. Of course, as in the previous edition, there are times more dragged, especially in the middle of the season, but nothing that a little patience does not work. Go after me and try to go to the end of the story.

My favorite mode continues without news, the Seasons Online. In all the tests I had no problem with lag or gagging in my quest to reach the top flight and stay there. The FUT is still good and didactic and you have more stars to strengthen your team.

It gives to make championship offline of several leagues, including of the Brazilian championship, that this year is "minor". With the exclusivity of the competitor, big national teams are not in FIFA 18 and, those that are, present generic athletes. I know I always hit this button, but for me it is important to have this feature because only then can Brazilians play with their heart teams. And do not tell me that you, Brazilian, cheer for Barcelona here ...

The return of FIFA to a Nintendo console - we still have not forgotten the Wii franchise disaster, no matter how good the intentions - is good, but it does not bring the same experience of the PS4 version, Xbox One and PC. There is a lack of modes and, of course, graphic detail. The look seems to be in between the current and previous consoles, which is not bad. The matches flow smoothly and it's fun to play, even online.

You need A Journey mode and a more realistic look (there are no game marks on the pitch) and better reproduction of athletes' faces, but the advantage is being able to play a high quality FIFA 18 anywhere. Putting it on the TV, however, makes the game lose some of the brightness, but it stays fun and a good choice for the "bigger" consoles.

Who should play this game

Who likes a football, which requires all the skill of the player, which requires prior knowledge and exchange of passes. To play with a friend, even with assists, it is important that he minimally knows how to play.

FIFA 18 manages to fix the problems of the previous year, bringing a consistent soccer and that requires the use of all the abilities of the player. The ball is played wide of the pitch, but the whole team are struggling to impress. It's better, but it still brings a half-truncated gameplay that is not so inviting to anyone who's coming in now to play alongside a friend. There are many game modes, highlighting the return of The Journey. It is not yet at its peak, but is already much closer than it already was. However, it will not fail to please those who are already a fan.