Deemo is another mobile rhythm game by the same developers of the somewhat popular rhythm game Cytus - Rayark Games. The initial release was for iOS on November 13th, 2013, soon ported to Android a month later. It was also ported to PS Vita and Nintendo Switch.

You start the game seeing a tall black creature with long limbs and nothing but pure white eyes, wearing a black suit. Living in loneliness with seemingly nothing but a piano and music.

However, a little girl suddenly falls through a trapdoor someday, right into Deemo's arms. The girl misses her home, seemingly not remembering anything. Deemo discovers that a tree slightly grows every time he plays the piano, and the two begin to have fun together while trying to bring the girl back home.

Gameplay in Deemo is simpler than in other rhythm games by Rayark, as there are only two types of notes. You have to wait for them to reach the black line at the bottom and then tap them. Kind of like Guitar Hero. The other notes are yellow, which you are supposed be slide notes. You basically only hold the first one and keep sliding your finger across the rest. 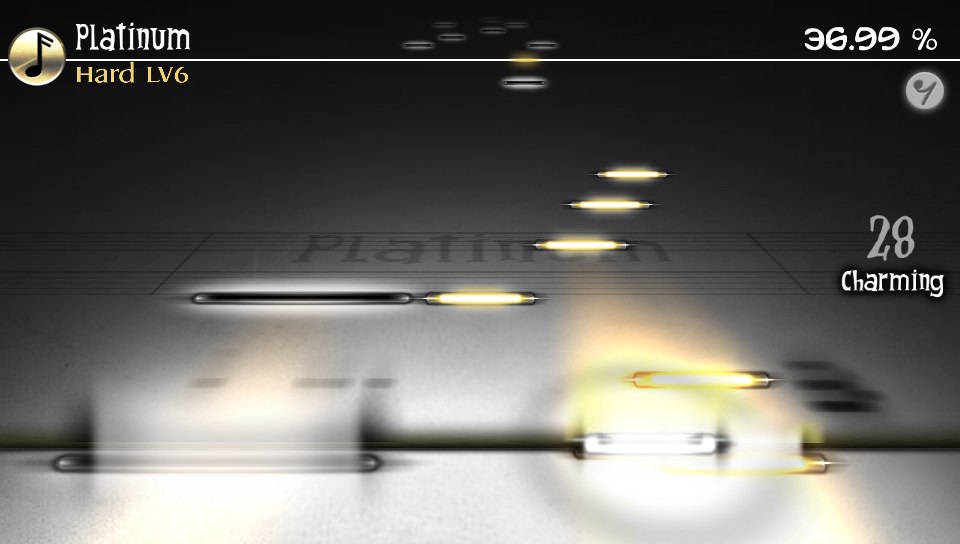 Every chart in the game has 3 difficulty modes: Easy, Normal and Hard. Difficulty in the chart itself is measured with numbers, ranging from 1-12. Some charts are naturally very challenging, so you might come across something like a chart in normal mode at level 9 (which is incredibly hard).

Unlike typical scores in most rhythm games, Deemo has only an accuracy percentage. You can either miss, land a good hit, or a charming one (perfect). In order to get the maximum score out of a chart, you must get all notes charming, to which you'll also get a special badge at the end. If you get AC (All Charming), it will be seen at the end of the chart and in the score screen.

There's also a badge for Full Combo, but it's significantly easier to get.
Every time you complete a new chart or beat your score, the tree grows a little. From my experience, it grows about 0.490 meters for getting Full Combo on a new chart. Story continues at some heights once you reach them and you unlock certain cutscenes.

The game uses music from various composers from different regions, and the variety in genres is rather large. It also uses music that was previously used in Cytus for some collections, in which the charts you play are sorted. This is the soundtrack from the first collection. Have fun imagining how huge the entire soundtrack is with this being only one collection. There are over 30 collections in the full version of the game.

The Forgotten Hourglass is an in-app purchase that lets you replay the story of the game after beating it with various changes, and the girl seemingly remembering that she's been there before. It may sound weird here, but it makes a lot of sense if you beat the game as a whole. Of course, I don't want to spoil it, because it's quite a twist. Progress on charts is saved in new Forgotten Hourglass playthroughs.

I'm not sure about this game. It's not my kind of a game but it's playable for sure and entertaining but after some time you get bored.. It needs more dynamics in game, the story line is really interesting though.