Wukong is one of my personal favorite champions. His mainly contributes to team compositions by bring large amounts of damage, an insane team-fight presence, assassination potential, and he can engage fights. His combination of his burst damage with his stealth and CC make him a dangerous champion to go against. This guide will teach you the basics of Wukong and provide some tips and tricks to making the most out of this monkey.

This contains a moveset explanation, building tips, runes, what a Wukong should be doing in the mid-lategame, how to lane, and how to jungle.

I hope you find this useful. 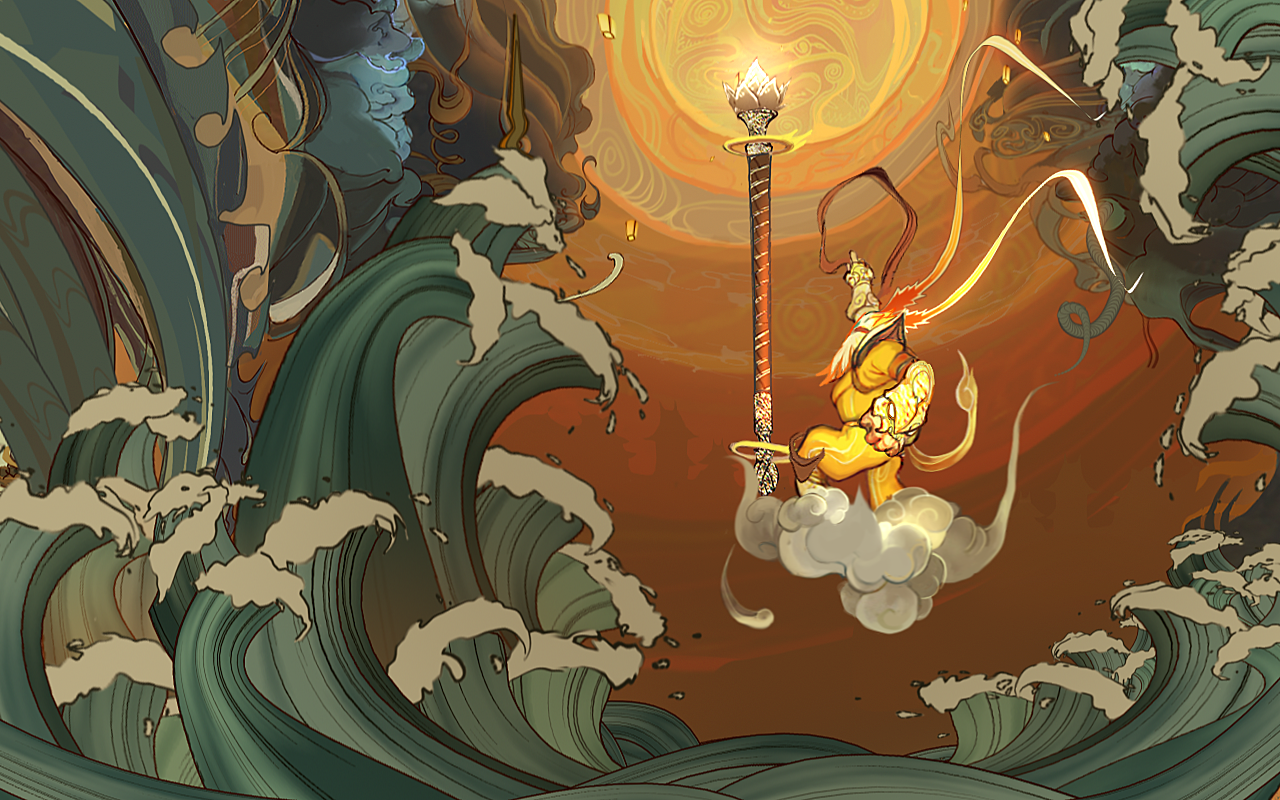 Wukong's passive is a bit of a strange one. With a passive like this you would assume Wukong is a tank or a bruiser. However he is still best as an AD Assassin. It isn't a bad passive, extra resistances are never a bad thing.

This move enhances Wukong's next attack, giving it more range, extra damage and armor shred. It is also an auto attack reset. If you auto and then Q as auto lands, you can cancel the animal of the auto attack ending and attack twice in quick succession. In some lane matchups you may want to start this ability.

One of the most fun parts of Wukong's kit is his decoy. When this is cast Wukong becomes invisible and a copy of him stands still for a second and a half.
These are some of it's uses
For avoiding return damage: If you use this in lane after hitting them it is difficult for your opponent to get return damage, it also drops minions aggro
For sneaking up on enemies: You can use this to get the jump on unsuspecting enemies
For tanking jungle monsters: You can make your clone take that damage instead
For blocking: You can use your clone to block moves. An example would be Lee Sin Q or a Blitzcrank hook\
For mind games: If you stand still and pretend you are a clone you can often confuse your enemy.

This is Wukong's gapcloser. It does AOE damage. If you are not in range of an enemy you can E onto a nearby target and the splash damage will hit them. Start with this in the jungle. Max 1st

This is the ability that gives Wukong his immense team fight presence. Wukong gets an AOE knockup that does damage per second to all enemies with the cylcone. It also makes you move faster. In certain niche situations this can be used to help escape a bad situation. This is the ability you should play around. Without your ult available you provide much less power. Look for a play with this move whenever it is up.

BUILD DAMAGE
Often when you fall behind you are told to build tanky. Wukong is a champion that should ALMOST never do this. It is similar to telling your Orianna to buy a Randuins because they are feeding. Wukong does not function well as a tank. If you have no damage you provide no threat and your only CC is your ultimate.

B. PEEL
Sometimes get a game where one of your teammates survival is crucial to winnning the game. If you see an Evelynn trying to assassinate your 12-1 Kog'maw then you better be looking out for him. This isn't a very fun job but it is necessary sometimes. You need to get the threats off of your teams threat.

C.ASSASSINATE
This is the fun one. You have enough damage so that you can kill someone on the enemy team reliably and consistently. If you are using your ult to do this make sure the target is important enough in the fight to justify the ult. If you see a Soraka and you need to ult to kill her DO IT. Do not judge importance by carry potential. Judge their worth by how much they will impact the fight. The 0-12 Yasuo who provides no threat to your team is not worth your ult.
When you are looking to assassinate someone do not just stand in the center of your team. Use your wards and trinkets to get flanks. Or use your teleport to catch someone off guard.

D. PLAY IT SLOW
Don't just go in with your ult immediately. In some fights you need to dance in and out of the fight. You need to play around your cooldowns and put as much damage down as possible throughout the fight.

E.SPLIT PUSH
Wukong is a champion that takes towers down fast. His attack speed steroid in his E and his Q take towers rather fast. If the enemy toplaner is better in team fights, or if you don't think you win 5v5, then you don't have to play by their rules. Spread the map out and make sure the enemy is playing on your terms. Get objectives for your team and look for picks.

TAKING TOWERS:
Like I said before, Wukong is very good at taking towers. When you are doing this make sure you do the following.
Use your Q on the tower and make sure you use it as an auto attack reset
Make sure to E nearby minions to increase your attack speed.

WHAT RUNES DO I RUN?


WHAT DO I BUILD??
Well...that depends. I would recommend looking at what pros build to see what is currently being built on the patch you are playing on. But here are some items you should always consider.
GOOD STATS INCLUDE: COOLDOWN REDUCTION, ATTACK DAMAGE, LETHALITY, HEALTH

Youmuu's Ghostblade: I really like this item on Wukong when I want to engage. You can Decoy from fog of war and use this active to surprise enemies.Gives lethality

Duskblade of Draktharr: If you are looking to snowball and dominate your lane get this item. Early power and lethality

Tiamat: Waveclear is never a bad thing and you get an active to help proc. eletrocute. I don't like Titanic on Wukong but it isn't the worst item in the world. Ravenous is typically better.

Guardian Angel: A REALLY good item on Wukong. If you engage you won't just instantly die. Your team will start fighting and when you revive you have the opportunity to continue fighting or to help take an objective.

JUNGLE ONLY: WARRIOR ENCHANTMENT: Get warrior, no questions asked.

Gargoyle Stoneplate: Once you get your damage off in a fight and want to survive pop this bad boy. Decent late purchase if your GA is down


AA= autoattack AC= Autoattack Cancel
Hit them with your E -> AA -> AC-> Q
You can either end the trade right there with W or you can keep autoattacking. You can also W, wait for your cooldowns and attack again.

Wukong has some very bad matchups, it is not a wise champion to blind pick in the top lane. Darius for example is a matchup that is nearly impossible for Wukong to win at any stage of the game if the players are of similar skill.
If you find yourself in one of these games, DON'T LANE. Grab whatever CS you can and go roam to another lane. If you see you are going to be in a bad matchup TAKE TELEPORT.

When laning it is also important to look at the champion and see how much damage you can negate by blocking with your W. If you are playing against a champion whose damage is mostly in one skillshot like a Zoe you can block the damage and get a really beneficial trade.

HOW DO I JUNGLE?:

Wukong Jungle is highly susceptible to counter-jungling. This champion is at very low health constantly. You cannot pick this champion into a jungler that invades. A Shaco or a Lee Sin that knows what they are doing will DEMOLISH you 999/1000 times.

Start your E for attack speed and clear your first buff, move to your next decided camp and use W. Make sure your W tanks a few hits as your potions tick away. If you start Q level 2 you will have extremely low HP. Do your next camp and either decide to full clear or gank a lane.

Wukong CAN gank early. His W stealth allows him to get past wards and surprise many laners if used properly. If you can, walk up without using your E and Q then autoattack, when they flash follow them with your E and kill them. If you cannot walk up use your gap-closer and at the least you should get their flash.

Wukong has the best gank potential at 6. You should consider starting a skirmish, you will likely win depending on the other characters in your match.

You can either powerfarm to 6 for the strongest ganks, or farm normally and go for those influential early ganks.
I typically get warrior and rush duskblade. Your build is your preference.


WHEN SHOULD I PICK THIS CHAMPION:

Wukong definitely could be spammed every game, but is best to look at your counterpart because certain champions like Lee Sin or Darius easily beat this champion. I typically play this champion in tandem with two others to give myself flexibility in different compositions.

okey i see you

hi, how is all of your day going

league of legends is good game