The Glorification of Overgrowth

Overgrowth is the game that allows you to quickly become the star of martial arts movie. You will clear your way towards the victory though jumping, kicking, throwing & slashing. Free the rabbits from negative, bad overlords & when you finish the story - then you'll play the prequel story, and at the end - try out nine years of mods developed by the community - or create your own mod.  Let me be simple - there is no end of it.

The Story of Development

It's obligatory to start on development story in each article about Overgrowth since this game is the game that has shocked the steam community and each fan of the Kung Fu martial arts-kind game.  When the development of this game has begun, first Android Mobile Phone was not released how long ago it was. Literally, 9 years ago. How long it was, in-between of its development even the Humble Bundle, the very popular website, was created from the same developers - that's the story on how much the industry has changed while this games development trundled on. Through the nine years of work on the open development, adding the campaign & tons of content in-between. And, the most important fact - the game itself still feels underdevelopment from time to time, and new campaigns & content are still being added. Anyways, Overgrowth is still popular even 2 years after release, and in this article, we'll review its gloriousness. 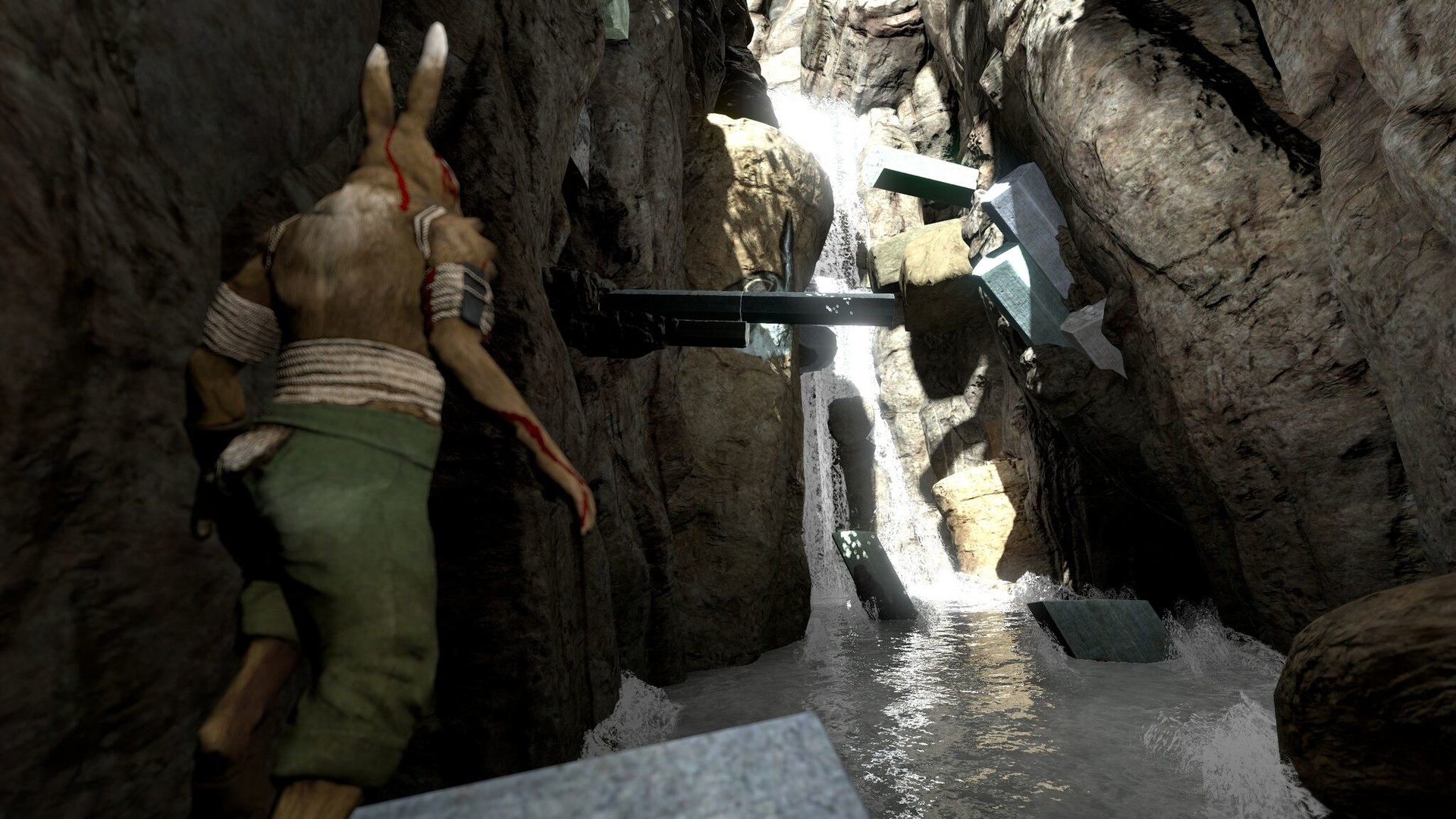 The main character - humanoid rabbit, while playing the game you, is Turner. Turner is a giant rabbit man who has incredible strength. He runs with astonishing speed, he leaps hundreds of meters through the air and due to his strength his kicks are devastatingly brutal. And the thing I have loved most in this game, he kicks a lot. Turner is violent, he enjoys dealing the pain to the cats, dogs, wolves and traitorous rabbits that would keep his kind enslaved.  You won't kick just because you are violent, don't worry. You are kicking & being violent because those of your kind who are enslaved must find their own freedom through your help. The rabbits he's freeing frequently offer to help him in his quest, but everything he answers/chatters back is an angry sequence like " don't trust anyone with my back, not anymore." for example. Anyways, Turner was never given much depth at all. All we can conclude is that Turner wants to retire on the Island where everyone awaits for Turner to kick theirs but. Besides giving freedom to those who are enslaved, the boss fight is much different than fighting smaller species. It is just an extra thing for you to enjoy in the universe of Overgrowth.

Combat in this game is incredibly simple, requiring the simplest buttons of each game: Attack and Defend & Parry. Once when you get to the ground, stop leaping, you can perform parries something nabbing enemies spears, swords or daggers in the process. Holding down the Left Mouse Button leads you to constantly auto-attack while holding down the Right Mouse Button automatically blocks and dodges if timed well. Press SHIFT & you'll dodge those attacks that could one-shot you.  Press Q and you'll fire spears into the backs of enemies. Not enough to have fun? Then try sneaking into camp to slash pooches before they can even whisper. Even though it is simple, it is a beautiful system that is fun even when it goes exactly as you have planned, or even when everything descends into farce. 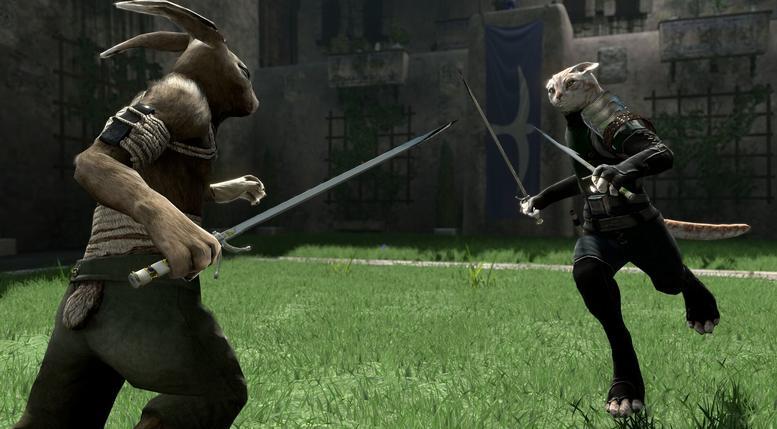 Simple Combat & Sneaking is not everything. If you have played Prince of Persia: The Sands of Time, then you surely remember that glorious wall running. Yup, it is happening in Overgrowth too. Turner's prodigious jump and wall-running abilities are used to scale linear obstacle courses. To be simpler, they are used when they have to be used, but it is not a must-use-only-them kind. Running over the mountains or 20-feet walls are there to blow your mind.

Besides wall-running & jumps, fights are not always the same. Usually, you'll fight weak dogs and wolves, but to make you more interesting Overgrowth offers you random boss fights whose attacks cannot be blocked/dodged at all and those must be twice reconsidered before done. You have to think about your every next step, you'll need to use your mind or everything you have done so far, all of the  progress must be started over. 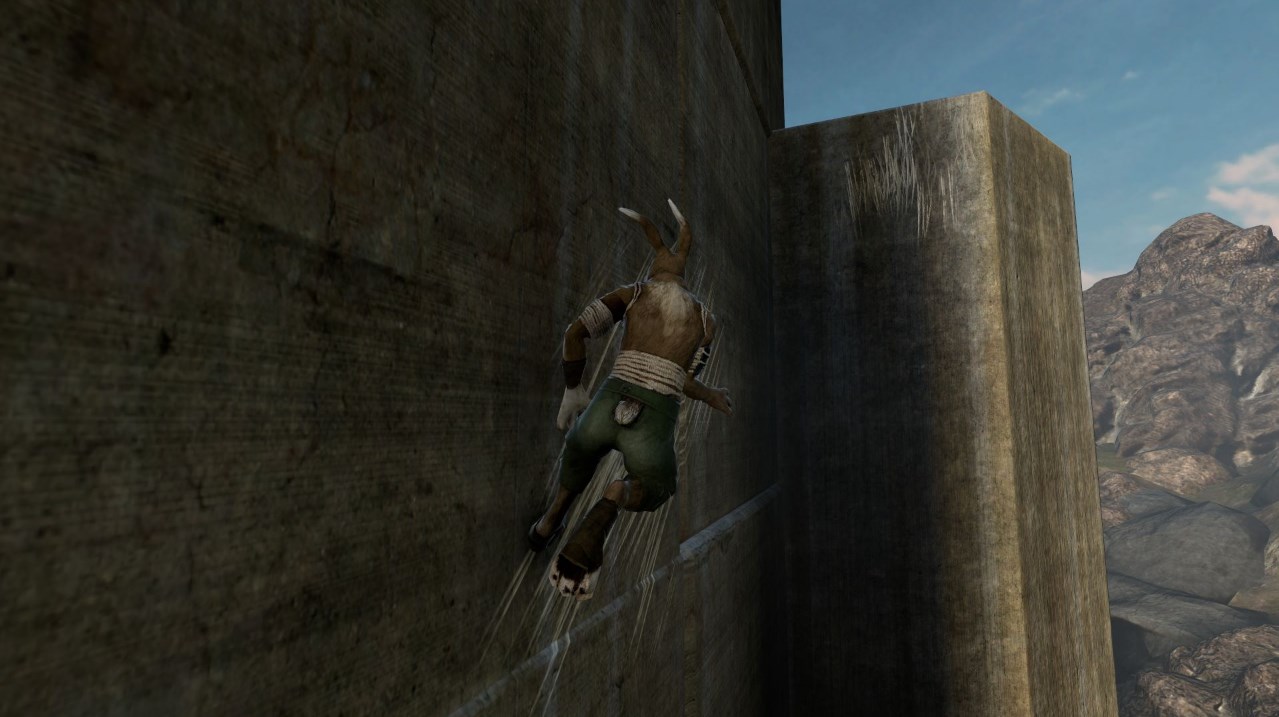 I don't know if there is any need to talk about the graphics details since pictures I've uploaded in this article are actually all screenshots from the Overgrowth's community, not photoshopped pieces of art. Anyways, I will be simple. This game offers you glorious graphics, everything including characters, camps,  Oblivion like-chat-textures and nature are realistic & enjoyable. Swords, Spears and Daggers are also well made, iron brights on the sun just like the grass is sharp, but when night falls weapons are even brighter.


The Soundtrack of this game is great. Each soundtrack follows the character, follows the situation you are in. If you are battling, there is music that will make you feel like you are there. Same happens with wall-running. The soundtrack is great, it fits great, it's modern but sometimes it reminds those medieval ones. You will enjoy it.

this is very nice

The grapichs are very good!

i wish i could play more of this game