Ghost of Tsushima: Everything We Know to Date

It is one of the great exclusives that PS4 will have before being relieved of its services by PS5. We speak of course of Ghost of Tsushima, the new title of Sucker Punch Productions, a studio that since 2011 belongs to Sony Computer Entertainment. Sucker Punch is nothing less than the author of Infamous and Sly Cooper licenses, in addition to the developer of other relevant games such as Street Fighter X Tekken.

This samurai game was announced in October 2017, at a conference that Sony Interactive Entertainment offered at the Paris Games Week. It was subsequently shown at several events, such as E3 2018, the State of Play, E3 2019 or The Game Awards 2019. The development of Ghost of Tsushima began in late 2014 or early 2015 , after the launch by the studio from Infamous First Light. Therefore, we talk about a large project with more than 5 years of work.

In March 2020, Sony finally confirmed the date that all players were waiting for. Ghost of Tsushima has a launch scheduled for June 26, in the summer of 2020 , for many an even closer to expected date. And the players were waiting for him at the end of the year, but here we must keep in mind that by the end of the year the new consoles will arrive, and this could detract from some prominence.

On the other hand, the date chosen is close to the launch of The Last of Us Part II , about a month later, but we must remember that the title of Naughty Dog has suffered a long delay that has disrupted the 2020 launch plans .

Ghost of Tsushima on PC or PS5

Although there is no confirmation at the moment, many rumors place the game on other platforms in the future. As with Death Stranding, a PC launch of this Sony exclusive is not ruled out , since theoretically the Japanese company wants to start being strong also in the PC video game market.

That is why it is said that the company's exclusive will arrive on PC one or two years after its premiere on PlayStation consoles. And speaking of consoles, for many Ghost of Tsushima on PS5 it is a very realistic possibility . Among the games that can have a cross generation launch, without a doubt this has many ballots.

The Ghost of Tsushima Collector's Edition for PS4

Ghost of Tsushima at its premiere will have several editions that have been confirmed alongside the release date. A project of such magnitude on the part of the creators of Infamous could not remain without their corresponding special editions. Attentive to all collectors, this is what includes the Digital Deluxe, the Special Edition and the Collector's Edition : 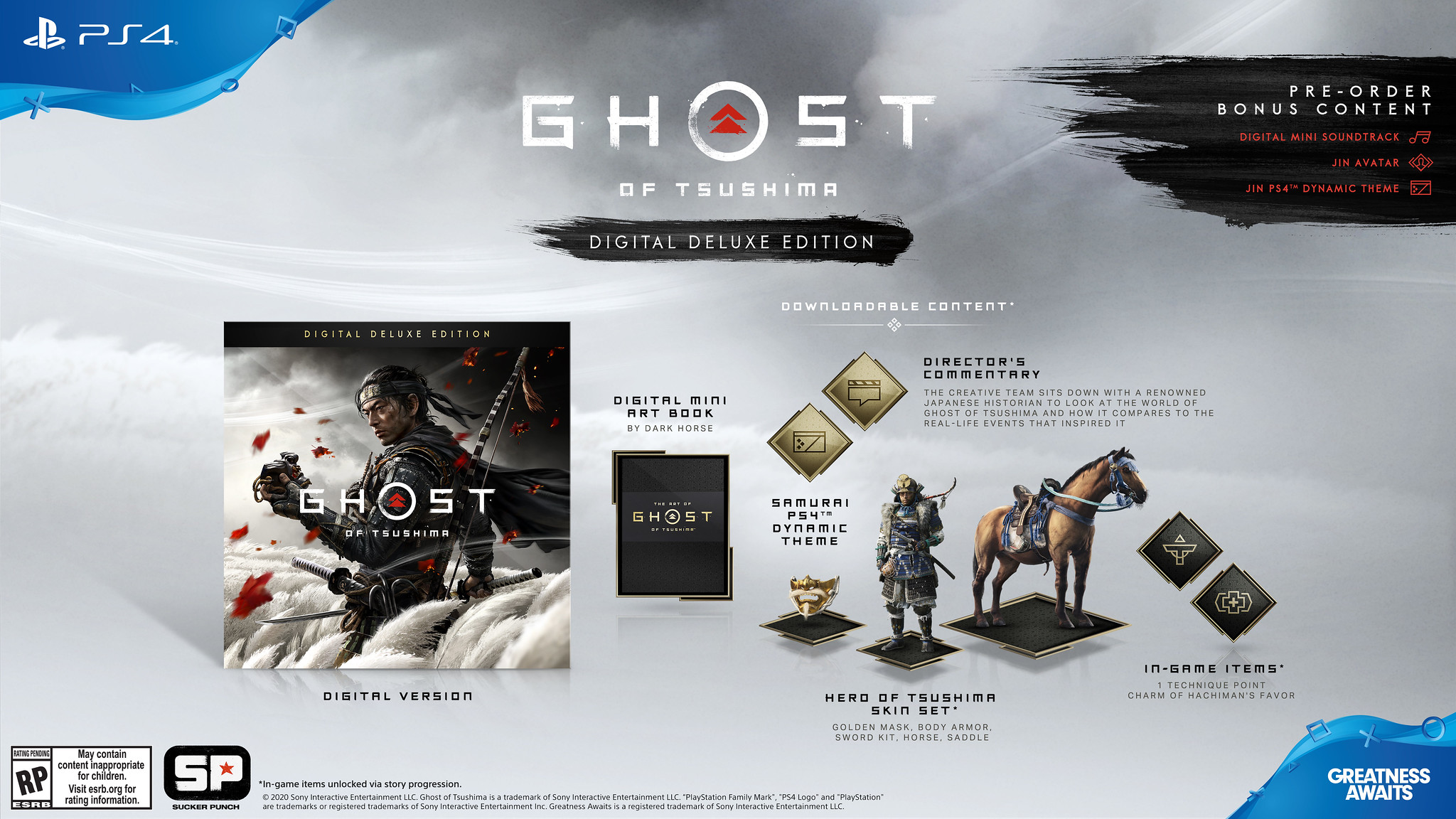 The story: A ghost during the invasion of the Mongol Empire in Japan

In the PS4 samurai game Ghost of Tsushima, players are situated in one of the darkest times in the history of the Japanese Empire. In June 2020, PS4 users will actually return to 1274, where real history tells us that one of the many invasions of the Mongol Empire came to touch Japanese land on the Japanese islands belonging to Kyushu, in the south of the country.

A huge fleet of the Mongol Empire transported 15,000 Mongolian and Chinese warriors, along with 8,000 Korean soldiers, in more than 300 warships and another 500 smaller vessels. They touched Japanese soil on the islands of Tsushima and Iki on November 19, anchoring in Hakata Bay. It is just this historical moment where Sucker Punch has wanted to set a story that undoubtedly offers many real dyes but also of the epic samurai cinema .

In this context we put ourselves in the shoes of samurai warrior Jin Sakai , who after the invasion of the Mongols on the island, will do everything possible to protect his people and recover his home. Tsushima is not only his home, it is also the only barrier that separates the rest of Japan from the massive invasion of his enemies.

A visual show at the height of Akira Kurosawa's tapes

Shimura, Mr. Tsushima and Jin's uncle, trained the protagonist since childhood according to samurai tradition. His is the first seed of those who will end up becoming the Phantom of Tsushima , a name that will arouse fear among the members of the invading Mongol army.

Not only Jin's story, character design and the world remind us greatly of the great samurai works of Akira Kurosawa . Also its open world of action and adventure, the care for details, the plans chosen ...

Fans of classic films of the genre such as The Seven Samurai, Rashōmon or Yojimbo of Kurosawa, The Sunset of the Samurai of Yôji Yamada, 13 murderers of Eiichi Kudo or Harakiri of Masaki Kobayashi, will notice a seal that undoubtedly reminds us of this type of cinema. For history, characters, sobriety, battles of katanas, samurai code, etc.