In this article you can learn about what Rocket League is about and how fun it is!
It's my first one so I hope it goes well!


Rocket League is a competitive sports game where you drive a car and try to score goals, just like in football. It's easy to get into and has a lot of deep mechanics to master. You have the choice of playing 1v1, 2v2, 3v3 and 4v4 where each match lasts 5 minutes. This is one of those games where you get better at playing the game, items are purely cosmetic, there's no gameplay parts locked behind a progression system and best of all there's no cheaters. Most of the players are using a controller, but that hasn't stopped me to reach the highest rank in the game using keyboard + mouse. It's available on Steam for 19.99€ and goes on -50% discount during major sales made by Psyonix.

To win a competitive game, you want to be able to read the game screen and remove the visual clutter. For that reason most of the video settings should be turned off with a few exceptions. You want to keep Render Quality and Texture Quality to a setting of at least "Quality" or "High Quality" if your PC can handle it. Keeping High Quality Shaders on is a must, but Dynamic Shadows can be turned off because it makes a big different on your FPS (frames per second). 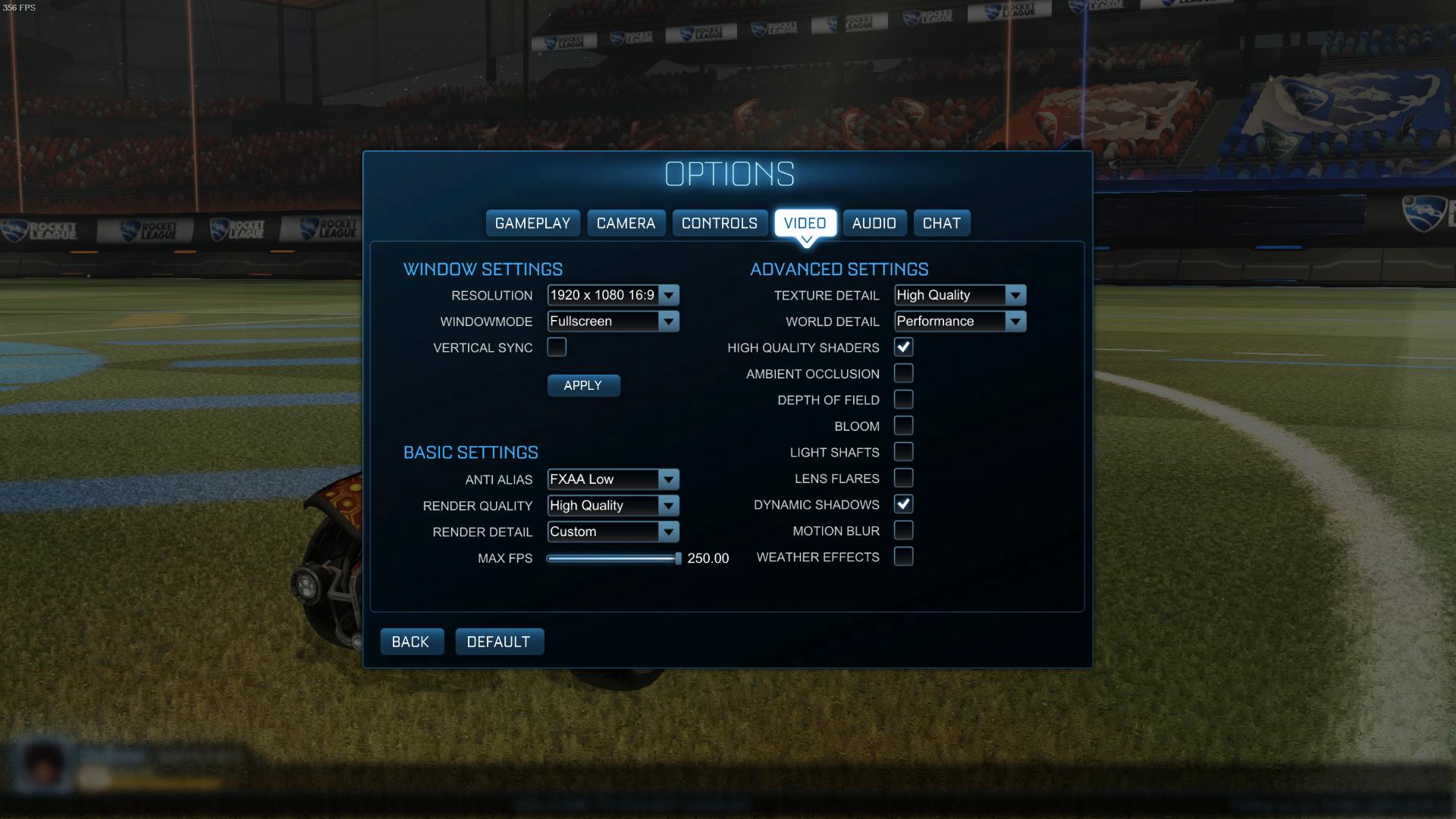 
There are various options that you can tinker with. The one universal change is turning off Camera Shake, it may look cool at first, but it's only annoying and gets in the way of playing. You can either spend some time in Free Play to customize the camera to your liking or just copy the camera settings of a pro player like I did. Here's a link where you can see which ones are popular https://liquipedia.net/rocketleague/List_of_player_camera_settings . The ones I'm using are:
Field of view 110
Distance 300
Height 130
Angle -4
Stiffness 1
Swivel speed 6
Transition speed 1

There are 5 different car types/hitboxes Breakout, Dominus, Hybrid, Octane and Plank. But most of the players use the Octane competitively due to it's height. A lot of cars had their stats changed to the Octane car because of how often it was used so Octane became it's own category. Freestylers (players who play for stylish goals) prefer using cars of the Breakout, Dominus and Plank hitbox due to their length which allows them to have better air control of the ball. Hybrid has stats between an Octane and the flatter/longer cars and is the rarest used car type.


The game features a basic tutorial where you learn the game controls and has 3 arcade mini games to teach you how to be a Goalie, Striker and perform Aerials, each with 3 difficulty settings. Aside from the tutorial, you can choose to practice your car and ball control in an empty field where it's just you and the ball in Free Play. There are also player submitted training packs.

-Solo Duel where you play a 1v1 against an opponent. This is said to be the most frustrating game mode because when you fail there is no teammate to blame, every mistake is yours. But this is why everyone recommends to play it if you want to get good at the game.
-Doubles is 2v2 and the most popular play list. You get a random teammate or party up with a premade to make cool passing plays or have time with the ball to make some solo plays as well.
-Standard is 3v3 and the one used for the E-sport scene. Forget about having time to dribble, because of the additional players high aerial plays are the king here.
-Solo Standard is 3v3 without being able to party up, but this playlist is barely populated so you would be lucky to find a match if you queue for this one. Nobody knows why it's still there.

-Rumble is a 3v3 mode where each player gets a power up every 10 seconds to bring chaos on the playing field. Power ups include:
The Boot (Kicks an opponent’s car)
Disruptor (Forces your opponent to drive with constant boost)
Freezer (Freezes the ball in-place)
Grappling Hook (Pulls you toward the ball)
Haymaker (Punches the ball)
Magnetizer (Attracts the ball to your car)Plunger (Grabs the ball with a plunger and cord)
Power Hitter (Allows you to hit everything harder and demolish opponents on contact)
Spike (Attach the ball to your car when you bump into it)
Swapper (Changes positions on the field with your opponent)
Tornado (Sweep up the ball and opposing cars into a giant funnel cloud)
-Dropshot is a 3v3 mode where you need to break the floor before you can score directly in the ground. The more hits the ball gets while it's in the air, the higher the charge it has and damage it can do to the floor.
-Hoops is a 2v2 mode where the goal is a net and you have to hit it from above. The hoops arena is also a bit smaller.
-Snow Day is a 3v3 mode where the ball is turned into a puck. This makes it heavier and less bouncy.

There is also a game mode for 4v4, but it's only in casual because it's too chaotic.

Every match lasts 5 minutes so you won't have time to think up of a great strategy while you are in game, instead you have to rely on quick decision making. At the start you won't be able to hit the ball, after that you will struggle to hit a ball in the air, but rest assured, this is normal. There's no shortcuts here, just keep going and jumping for the ball until you get the feel of it. After you get comfortable hitting the ball you may want to implement some strategy to your gameplay, The main idea is to rotate behind or on a side from your teammate, but don't try to go where he is, you will have double committed (sent 2 players for the same ball). In 3v3 it's best to create a triangle on the field to be ready for every kind of ball instead of making a line, here's a picture for reference. 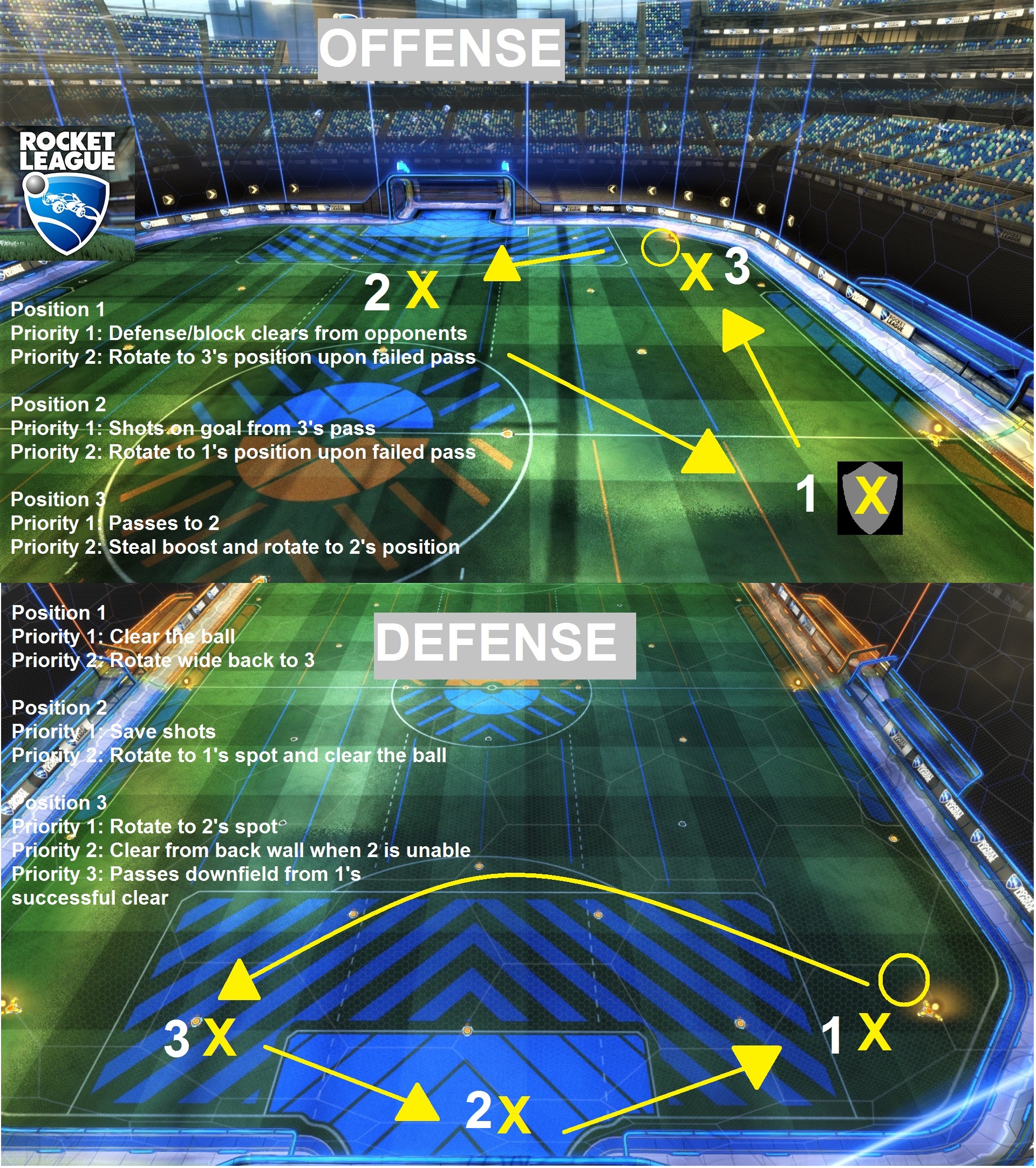 Another thing is to practice your recovery mechanics, using wavedashes to increase your speed without needing boost and landing with your wheels on the floor or walls. If you become so good at doing it, you will be faster than your opponents, so while your teammate is attacking, you can go bump or demolish your opponents to open up a free net to score on.
I hope you will have as much fun as I did if you decide to pick it up. It's a high speed intense game compressed in a 5 minute match.

its a good game

I might get rocket league, so this can help me!

its a good game