F1 2019 is the 11th instalment of F1 franchise published by Codemasters. Released in June 2019, F1 2019 is the arguably one of the most ambitious games since the franchises' inception, boasting several new, unique features as well as massive upgrades to the modes and features we have come to love over the years. With all the improvements for F1 2019 compared to its predecessors, it absolutely has the claim to the most complete and playable F1 Game Yet.

For the Career Mode, the obvious fascinating change for this year’s release is the introduction of F2 Cars (a lower Formula feeder series for F1) giving players a chance to face a new challenge with a different feeling car compared to the faster F1 Cars. Not only have Codemasters added F2 Cars into the game, they've also added a story-driven element, scenarios, drama, cut scenes and two new characters (Devon Butler + Lukas Weber) giving you something better than racing against a Computer for 10 Seasons. Decisions that genuinely impact cutscenes are really great to see, improving the player immersion into the world of Formula 1, but after 3 short F2 Races and a handful of Cut scenes, the F2 season is already over, rather anticlimactic for a feature with such promise and potential. The whole experience is taken away far too quickly, and in approximately less than one hour of game play you are already promoted to F1 regardless of your performance in F2. Furthermore, the newly established cut scenes and story-based game play cease to exist in your F1 Career, apart from the mundane post session interviews. Unfortunately, just a return to standard Career Mode in F1 Games.

A returning feature for F1 2019 is the R&D tree enabling the player to upgrade and improve the Speed and Efficiency of both the Car and Team. Whilst the featured has been around for the two previous Codemasters’ F1 Games for this year they have sought out to enhance it, with more upgrades overall and increased pricing for all the upgrades, promising it to take longer to fully complete the Research and Development Tree, lengthening the experience. Such a features opens hundreds of possibilities for how you, the player, wants to play the game. Want to join a team already the best and continue their domination in your career? Choose Mercedes or Ferrari. Or are you more intrigued by a challenge, a desire to take a struggling team to the top? Williams or Haas might be more your flavor. However, you want to play the game, there is a team and challenge for you. 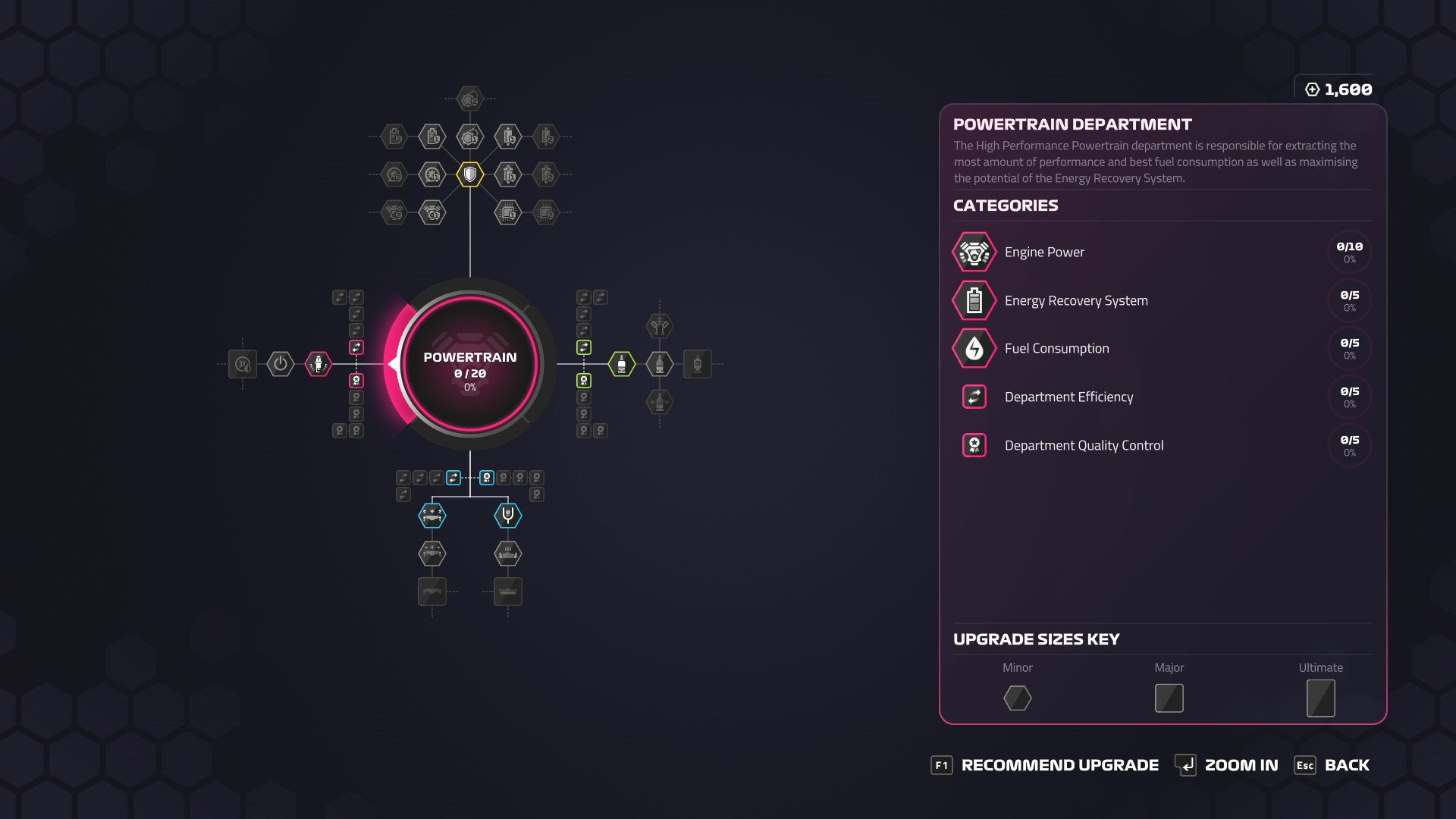 One request that has been made several times over the years is adding Driver Transfers to Career, and for F1 2019 they have finally listened. Have you dreamed of Lewis Hamilton racing for Ferrari, or desired Max Verstappen and Charles Leclerc to be teammates? If so then this is probably a feature you will be interested in. This is a massive positive for the F1 Community, because not only is this a much sought-after feature, this also proves that Codemasters are actively listening the player bases' desires and feedback. Although this an amazing implementation, one issue with this is how Drivers helmets will still have old teams sponsors on, ultimately this is due to Licensing issues something Codemasters can unfortunately cannot fix, probably a reason they were not so eager to implement it.

With all of these new features in Career Mode, as well as minor improvements to the weekend format, practice programs and several other features, this year’s Career Mode has to be the most enjoyable. With multiple ways to play, driver transfers and an expanded research and development constantly changing the standings of teams and drivers providing fresh challenges and new content making the game last more seasons than ever before it becomes too mundane..

For 2019 Codemasters desired to change all expectations for what players have come to expect for multiplayer modes in their F1 games. This Year there has been a genuine effort to make Multiplayer a reason to continue to play the game.

New for 2019 is cosmetics. Personalize your Car with custom liveries, helmets etc. Completing multiplayer races will earn you credits with which you can earn most of these unique cosmetics, whilst some premium cosmetics require microtransactions (something a lot of players will be skeptical about). 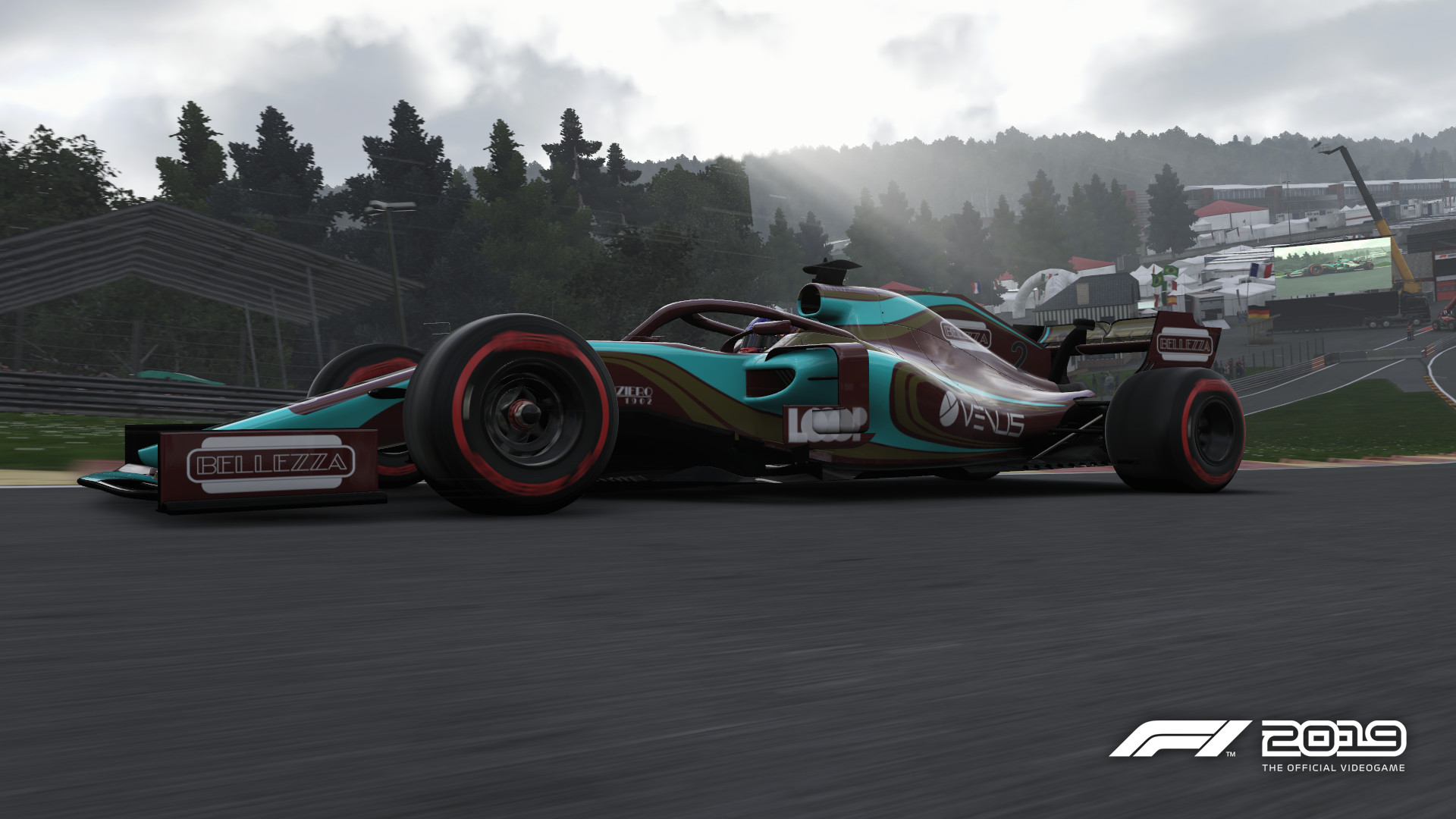 A new ranking system has been introduced this year to maintain competitive integrity between players for multiplayer. For most, dominating easier opponents is not exactly a rewarding experience and vice versa, also facing Drivers who drive over-aggressively is something that most also tend to want to avoid. To combat this issue, Codemasters have introduced a Safety and Skill Rating system to match players of similar skills. Not everyone wants to be placed into Competitive Racing with skill and safety ratings, so the addition of the new Unranked Game mode will appeal to the casual player base.Unfortunately, once again this year the multiplayer experience is rather hindered by several game-breaking bugs and issues, not to mention the broken-online collision system which is dysfunctional at best. Year after year, complaints are constantly made about the state of Player Vs Player racing, something that everyone hopes can improve for future iterations.

With a new game, comes new handling, graphics, tracks, cars, AI, and UI. All of these have greatly been improved upon since the previous installment in the franchise.

In Conclusion, F1 2019 is a ground-breaking Codemasters F1 Game adding engaging features further connecting players with the world of Formula 1, this game has raised the benchmark drastically for future installments into the series. Obviously, the game isn’t without its flaws, but due to continuous improvements most of these are rather minor and bare little to no impact on player experience or immersion.

I've never been a huge fan of racing games. But this one isn't bad

graet article, I got it in my humble bundle and im thinking about keeping it

great article, i play this game a lot and its fun