Some tips/tricks that I think would help.

When fighting 2v1, the odds seem stacked against you. But I've found a way to give you the upper edge:
1) Focus on killing the weaker of the two. You determine who is weaker based on their armor and their current playstyle (offensively = more hp | defensively = less hp). You want one of them to be knocked down.
2) After that player is knocked down, use him as cover against his friend.
3) Because it's not possible for a teammate to harm another teammate, the knocked down teammate should purposefully protect you from being shot by the other teammate. Knowing this will give you an advantage in 2v1 situations, eventually, you'll take this knowledge for use in a 3v1 and even a 4v1 situation!

The no slow trick is more of an intermediate trick seeing as newcomers are not as familiar with the game by now. This effects guns like m870 and the Mosin Nagant in which they slow you down after you shoot. The way to avoid this slow effect it gives is to do what is called the "No Slow Trick" How to perform: - Shoot gun - Switch to another gun (or fists) - Immediately go back to the weapon that slowed you Your slow effect will disappear once you switch to another gun (or fists)   Frag Grenades Grenades explode after around 5 seconds. If thrown at 3+1/2 seconds or 4 seconds they will explode directly upon impact....use this as you wish
Let's save those pills and sodas for later. NO, stop doing that. Don't save them for later. There are plenty more to spare, you'll earn more by killing opponents. As soon as you have enough soda and pills to reach level 3 on adrenaline, get to super saiyan mode immediately and start getting kills everywhere. You'll need the speed to dodge bullets and scout the map out faster.
Of course, you may say, Pills and Sodas should be saved until there are less than 30 people left. More than 30 people make it so you're more likely to have a wider circle and players more spread out, wasting your adrenaline to find them and actually come into a fight maybe. Once the circle is small enough (~30 people in a 75 player game.) then having the speed boost is most critical. Also, you can't always rely on people having sodas and pills for you to grab late game, due to they most likely already used them.

TIPS FOR MOBILE
- Your aim is going to be off so always be careful, your opponents (since most of your enemies will be on PC) - Single fire weapons that have no debuff in between shots are really fast! There is no time in between shots because the game sees you clicking really fast due to the joystick function on mobile. (If you don't believe me pick up a pair of dual m9's and just start shooting) - You pick up things automatically. So you can throw a smoke grenade on-top of loot and automatically pick up stronger armor, ammo and medical supplies - Don't use an Ump or Famas, those weapons require a lot of accuracy and you're most likely going to miss - Despite lack of accuracy picking up single fire weapons such as m9, mk 12 SPR and (sometimes) OT-38 are highly useful because you're shooting constantly and very fast and it's easy to adjust your aim - Shotguns are highly useful the MP220 shot is extremely fast (because no time in between clicks/shots due to joystick feature). However I prefer M870 on mobile because there is more forgiveness with missing (which you will need due to aiming sucking) - Automatic weapons that fire in a straight line like the MP5 and Ak-47 aren't amazing but they'll do the job - Mac 10 is my favorite on this, the fire rate and the spread is extremely useful - Dual single fire weapons (Dual m9 and dual OT-38) are extremely useful, they shoot very fast and do decent damage - Dual Glocks are very useful (takes more skill though) because if you get close your enemy dies practically in an instant - You need every advantage in the book in order to win (especially if you're on solo) so scopes and smoke grenades for escaping are your most useful tools. 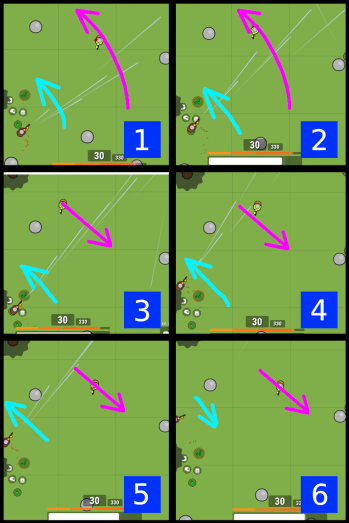