Ogame is a browser game where you build up a space colony from scratch. You have to upgrade your mines to get resources, and also be aware of your energy production at the same time. You can command fleets of ships and send resources to allies. Since this is a review, I will not be covering all these subjects in this article.

First of all, OGame isn't exactly that popular. Not many people play it, and at the most I've seen 140 people playing in a single server. That might seem like a lot, but in reality, there are other games out there with millions of people playing at any given time.

How it looks and feels: When you log in, there is a sort of overview like screen where you can look at offers, links to social media, and then the play button. I think it looks great, not being very messy and only having a few essential things you'd want to look at. Then you select a server and boom, you have a planet. Now this is where things can go wrong. The game does not show you a tutorial at first, as you have to look for it. This can be confusing for new players, and they might end up spending all their resources on something that's useless. Once you find the tutorial, (the question mark), you can begin making resources. It's similar to a sort of questing feature, as it tells you what you have to do to progress, and then it rewards you. It doesn't guide much, and you may end up using the wiki which has a more in-depth tutorial. 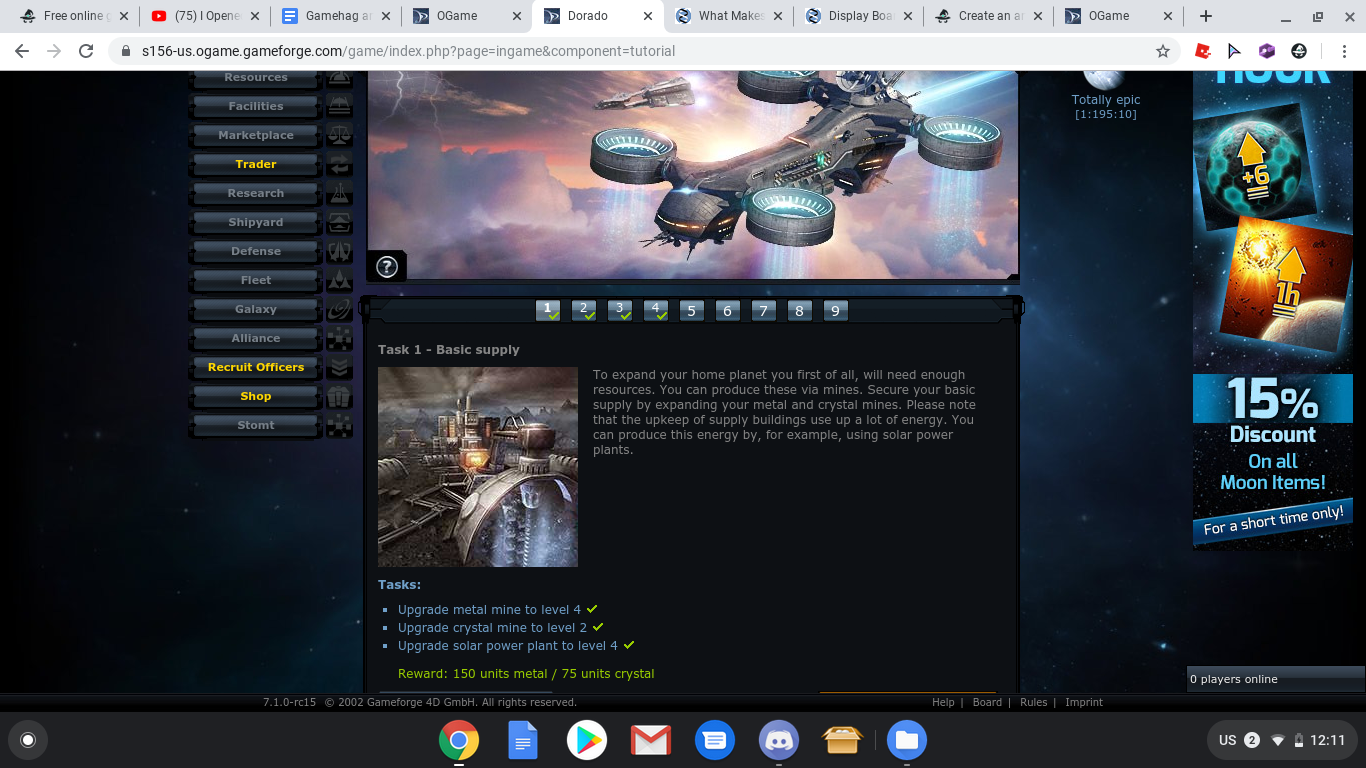 Gameplay: There isn't much to the gameplay, as you just "improve" or "build" things. After a certain amount of time, the page reloads with new values, like if you upgraded a mine from level 1 to level 2, the page would reload with the mine being level 2. That basically means you can't see things in fps or such. You interact with buttons and look at pictures. You don't get to see your fleets move, or your mines in action, but at least for a web game it isn't laggy.

Random things I want to point out: At first the wait time for you to upgrade structures isn't that long, but it gets long quick. The game is actually really old. Like really really old. Maybe from 2002? You can play the game on almost any device, and probably has the same amount of lag or less than the web page we're on right now. You can only hold a certain amount of resources, and then production stops and you have to spend it or upgrade your storage. There's a marketplace, where you trade in resources for things, without spending dark matter, the currency in the game. (You have to buy dark matter.) I don't recommend beginners like me to go there, as the prices are very high. That's about it for what I have to say, but all of these make the game unique. (As if it already wasn't.)

Conclusion: I think OGame is addicting, sure, maybe the pictures don't move, but they are detailed and pretty realistic. I haven't gotten that far in the game, but it has been an epic journey, managing an economy, the military, etc. While I don't think it's that fun to play normally, as a game you play everyday, I think it's a good game to have running in the background. 7/10, I'd recommend this to anyone who likes a good space economy/military game.