Ever wanted to play a Dodgeball ? Do some trick shots, record them and share with friends ? Than this game is worth a try ! Easy controls, cool graphics, amazing disco music and lots of fun !

The game itself is very simple. After the countdown gates open and all players enter the playing field with or without teams. Depending what mode you play, objective will be different, but one thing is for sure: kill enemies, avoid the balls, which were thrown by your opponents, and complete the mission. I will talk about each game-mode later. There are abilities to jump and boost with some cool-down and there are some power-ups, which you can find and pick on playing field. Longer you hold the shooting button, more powerful shot it will take. There are many skill shots (trick shots), which give some extra points. These can be useful in some game modes. 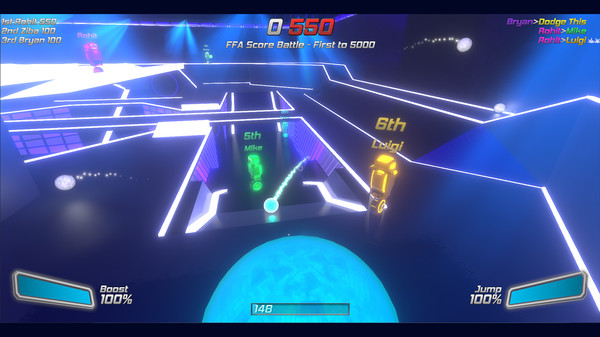 Deathmatch -> This is a very basic game mode. Players or teams try to be the first one to get enough kills in order to win the game.

Score Battle -> Score Battle is a game mode in which players compete to score the most points. Performing skill shots (like helicopter (360), Dunk, mid-air, long distance, etc.) will earn the player and/or team additional points. The match is won by the team or person, who hits the predetermined score first.

Elimination -> In this game mode all players enter the arena with only one life per round. In team Elimination, each team's goal is to win enough rounds in order to win the whole game. If a player dies, they are out until the next round begins. In Free-for-All Elimination, it works the same way, except everyone is on their own.

Hoops -> Almost a basketball. In this game mode, there are two, floating square hoops. In the center of the arena is a golden ball. Players must get this golden ball and shoot it through the opposing team's hoop in order to score, all the while avoiding getting hit by opponent's dodgeball. In Free-for-All mode, the golden ball may be shot through either hoop. Keep in mind, that golden ball is a deadly ball too. Holder can kill people any time, so don't be too confident while chasing him/her.

Super Ball -> In this game mode, players must fight to rack up the most points by keeping the golden ball in their possession for as long as possible. When the match starts, a golden ball starts off in the center of the arena. The longer a player holds the golden ball, the more points he builds up. In team Super Ball, the scores of each player will contribute to their team's overall score.

Grand Prix -> In this mode, players must race around the several checkpoints scattered about the arena. Whichever team is the first to have raced through enough checkpoints to reach the score, wins the match. In team Grand Prix, the number of checkpoints each player has gotten is not combined with other teammates. Whoever on a team has ran through the most checkpoints, their score will be presented on the scoreboard on the top of the screen.

Horde ->This is a game mode where one or more players face off against an ever increasing horde of bots, which get harder the further the game goes on. The objective is to score the most points by killing as many bots as possible before you are KO'd.

Training -> Training is available to players who want to practice stunts, trick shots, or just the game in general. In whatever arena is chosen, several bots spawn in set locations of the arena. These bots do not move nor try to hit you, which allows you to practice your skills.

*There are some more game modes, which are mixes of others. So find the rest in-game ;) 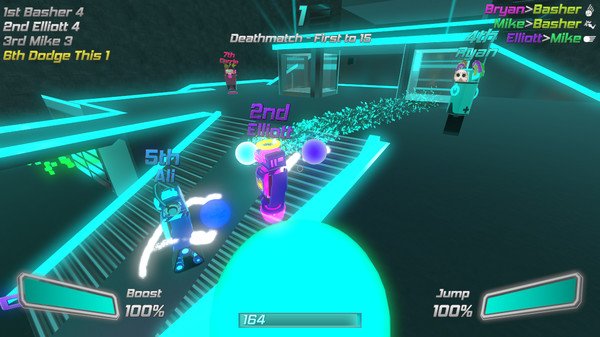 Arcade is a single-player mode where the player has a limited amount of lives to survive waves of enemy bots and become president of the galaxy. There are a total of 8 levels, each having 3 waves. The player starts with 5 lives.

The player earns DodgeBux by performing KOs and Skill shots. DodgeBux can be spent at the end of each level to purchase upgrades. Upgrades give the player extra abilities that can help them go further. Upgrades that are equipped can be sold although any that you have used for at least one level will have it's price reduced. Lives can also be purchased in the Upgrades screen.

There won't be default bots every time. During the rounds some special bots and bosses can appear. each of them will have some special power-ups or abilities. So it will be challenging and fun to play it.

Like other games, this one also has an ability to customize your character. Body, Head, Wheel, Eyes, Mouth are all changeable. Not enough ? Put some glasses, other accessories, change robot and thrown ball trails and be fully different from others. And that's not all. You can create two appearances: one for winning round picture, and other for losing round picture. You get customization items after leveling up or by crafting. You can find crafting items by playing matches. There is a chance to get random crafting material after each played match (no matter offline or online).

How to catch -> You can catch/collect any ball by left-clicking directly on it when it is in range. The ball will glow your color when it is available for catching. If the caught ball was thrown by an enemy, they will be KO'd. If playing in elimination mode, catching a ball will also respawn a friendly teammate (unless playing in Free for All mode). Note, that you can't catch balls with Fireball power-up.

How to Power Slide -> Power sliding is a mechanic used to quickly recharge boost during a match. Hold down Right Mouse Button while pressing forward. Once you start turning with the mouse you'll start drifting. You can adjust slide with mouse or left/right buttons.The sharper the slide angle, the faster your boost meter will recharge. 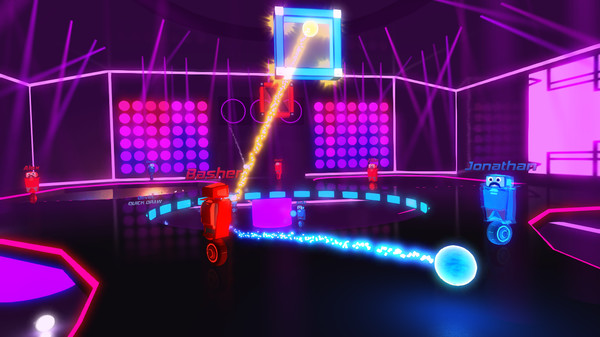 This is one of my mostly loved games nowadays. It's really satisfying to play it and do some crazy trick shots while hearing some disco music. You may want to stop after playing 1-2 hours non-stop, but it will definitely be playable later. It is worth to purchase this game for sure !

tnx for helping me

can anyone give me free steam key, please? hmmm

The game itself is very simple. After the countdown gates open and all players enter the playing field with or without teams. Depending what mode you play, objective will be different, but one thing is for sure: kill enemies, avoid the *****, which were thrown by your opponents, and complete the mission

Gamehag is pretty good when i teleport in this platform!

Gamehag is pretty good when i teleport in this platform!

Martocky and the original resolution

Kak and the original resolution was passed by