Wizard Simulator is a game that has becoming pretty popular on ROBLOX recently, and today im gonna give you a little guide about the game and what you do in it and well, stuff.  (and also reviewing the game xd)

Wizard simulator is one of my favorite games on roblox and today, ill review it and give a lil guide on what u do in the game. 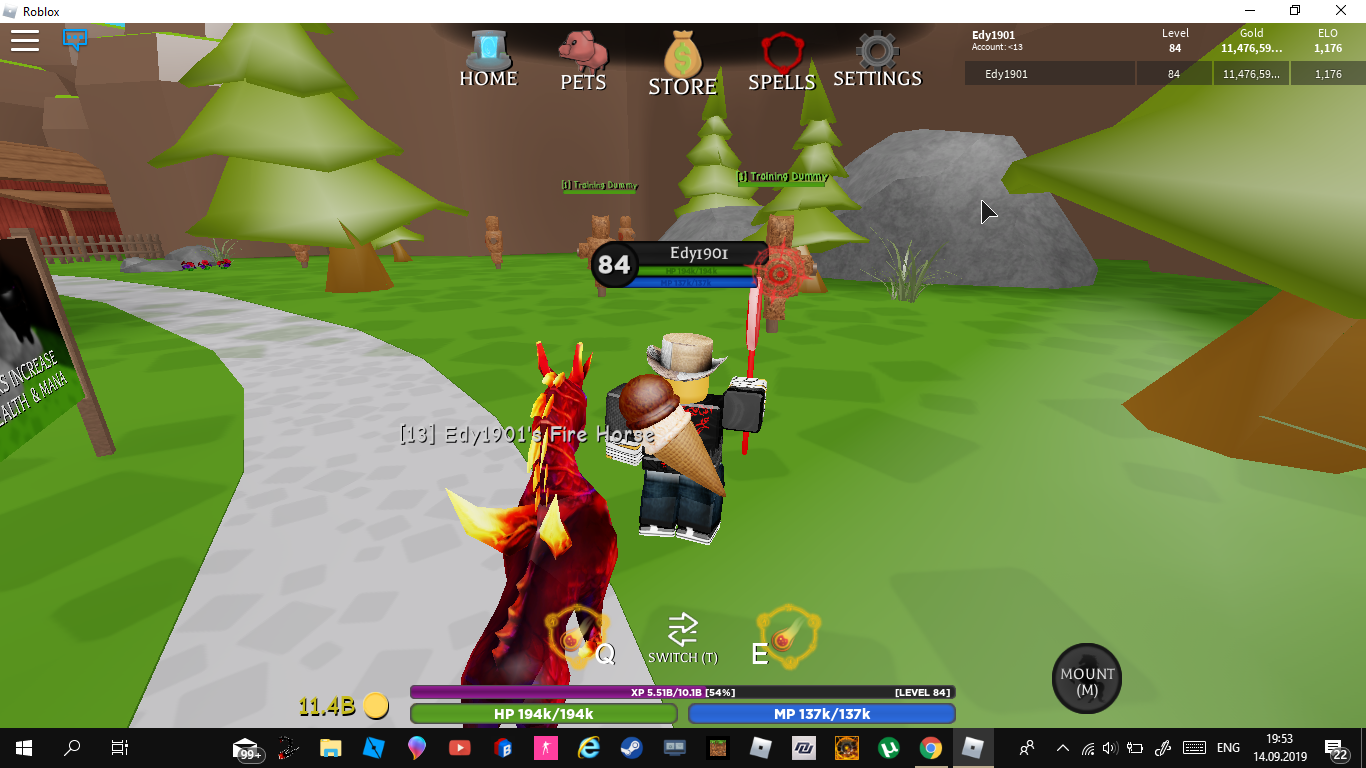 So, how do you play the game? Well, there  is an npc or 2 in every map which gives u quests. Doing quests you get xp and coins, you use coins to buy staffs and backpacks. The npcs usually tell you to beat an enemy. For example in the first map, dummies.  But once you have high enough level they tell you to beat bosses. 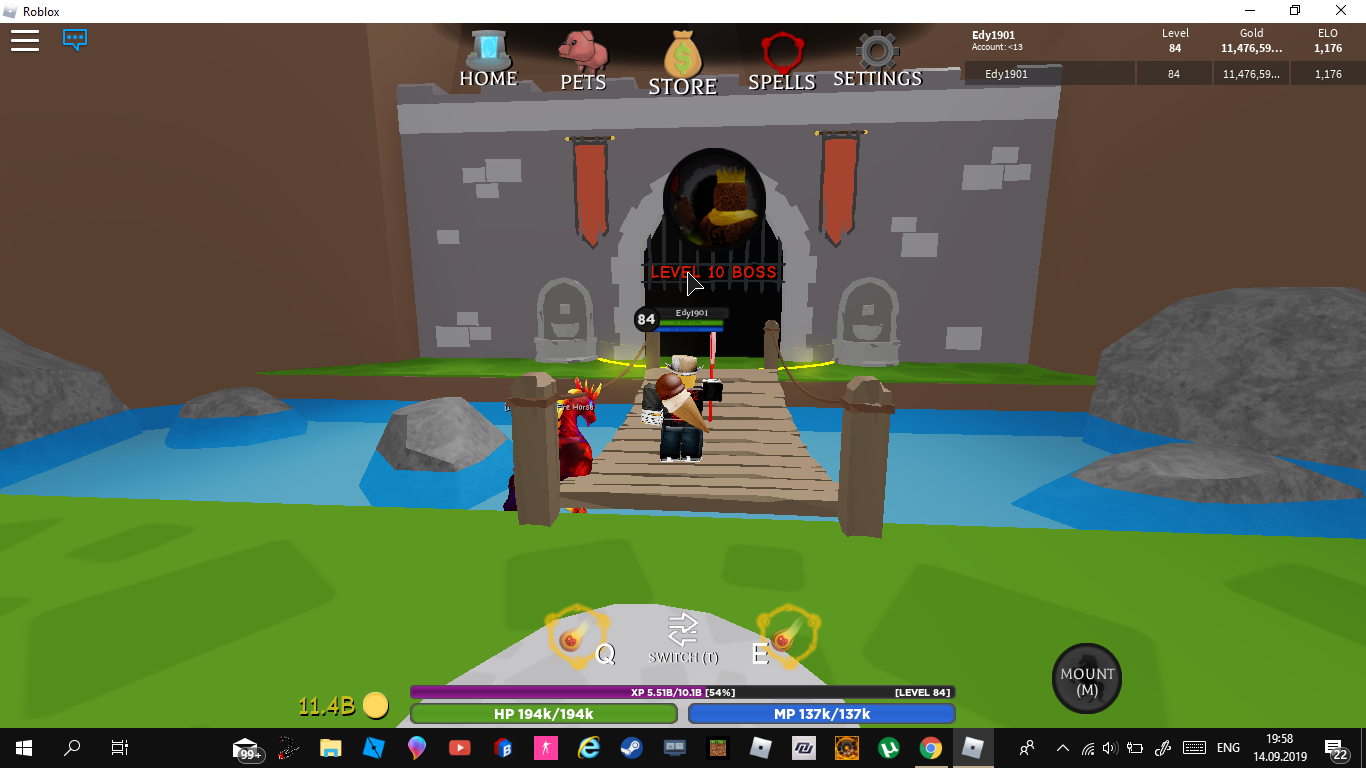 Bosses are well, bosses, they are the toughest enemies around the map and they are two types of bosses in this game.

Golems are more like mini bosses. They give you an spell and alot of exp and coins. But they do not unlock the next world.

The only map where there is a golem quest is magma world. (Level 40 map) You get the quest at level 53/54 and usually get a M xp if u do it solo. (and coins)

Golems are easier than the actual  bosses exept for the first map, the boss is level 10 and the golem 24.


The golems in the game are: Earth golem, Stone golem, Water golem, and the other 2 maps do not have a golem yet.


The main bosses are the bosses that give more xp and coins (obviously) and unlock the next world for you. Every main boss has a lvl requirment, for example, Magma King : Level 58.

Main bosses also give you spells, and if im correct you do not have a quest for them exept in the 1st map. Where the training npc gives u the quest so you can unlock next world, i believe Wolf Village ( 2nd map) npc gives you a main boss quest too. 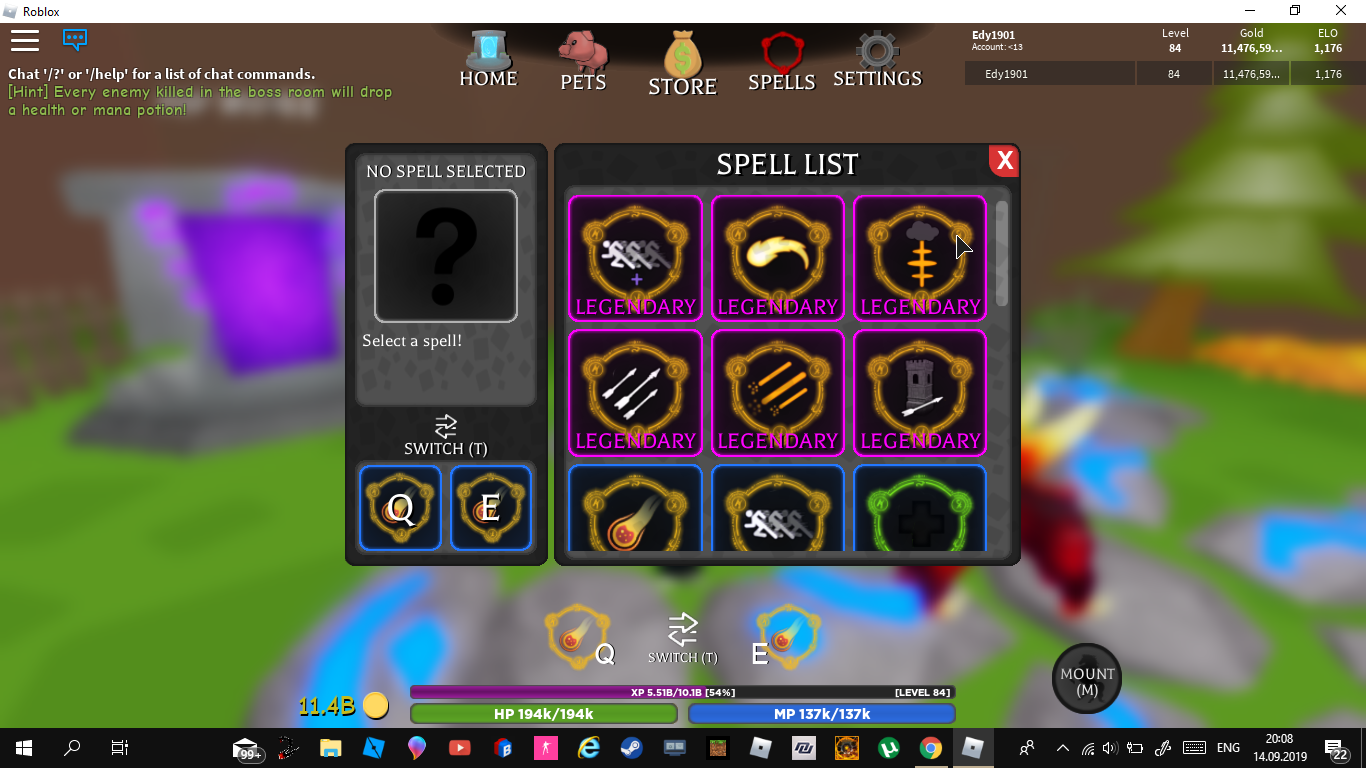 The spells are well, spells, they attack the enemy u select, and these are the ways you get spells:

You beat the golems or the bosses.

You level up to a random level, for example, at level 26 you get a rare spell.

You do certain requirements.

There are 4 tiers of spells. Common, Rare, Epic and legendary.

The legendary spells are not always the best by the way, a good attacking spell is meteor, which is an epic. 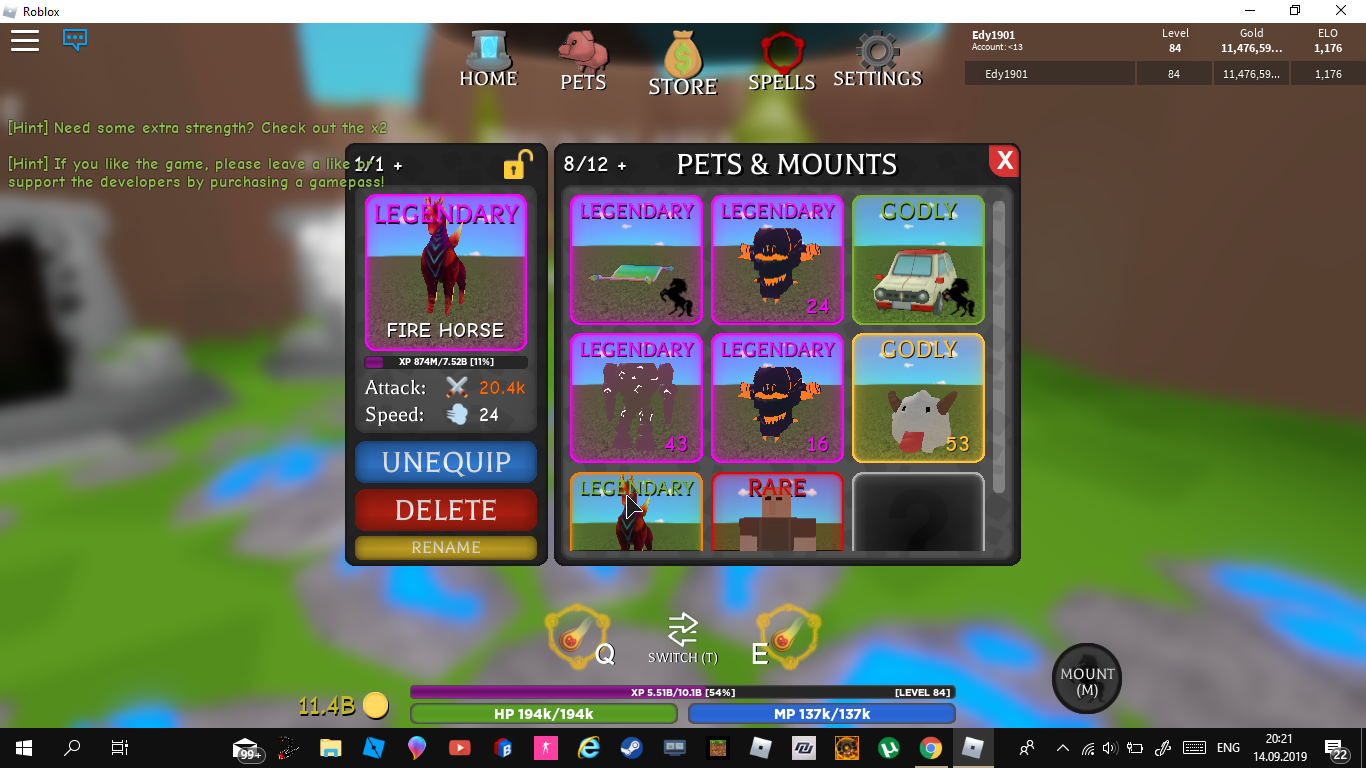 Pets are little buddies which help you throughout the game. You get them from pet chests. There are 2 types of pets in this game.

Ranged pets, aka. pets which dont need to be near enemy to attack.


Normal pets, aka. pets which need to be near enemy to attack.

There are 5 tiers of pets in this game.

If you are wondering, godly pets are from the robux chests. But you can trade for them too. 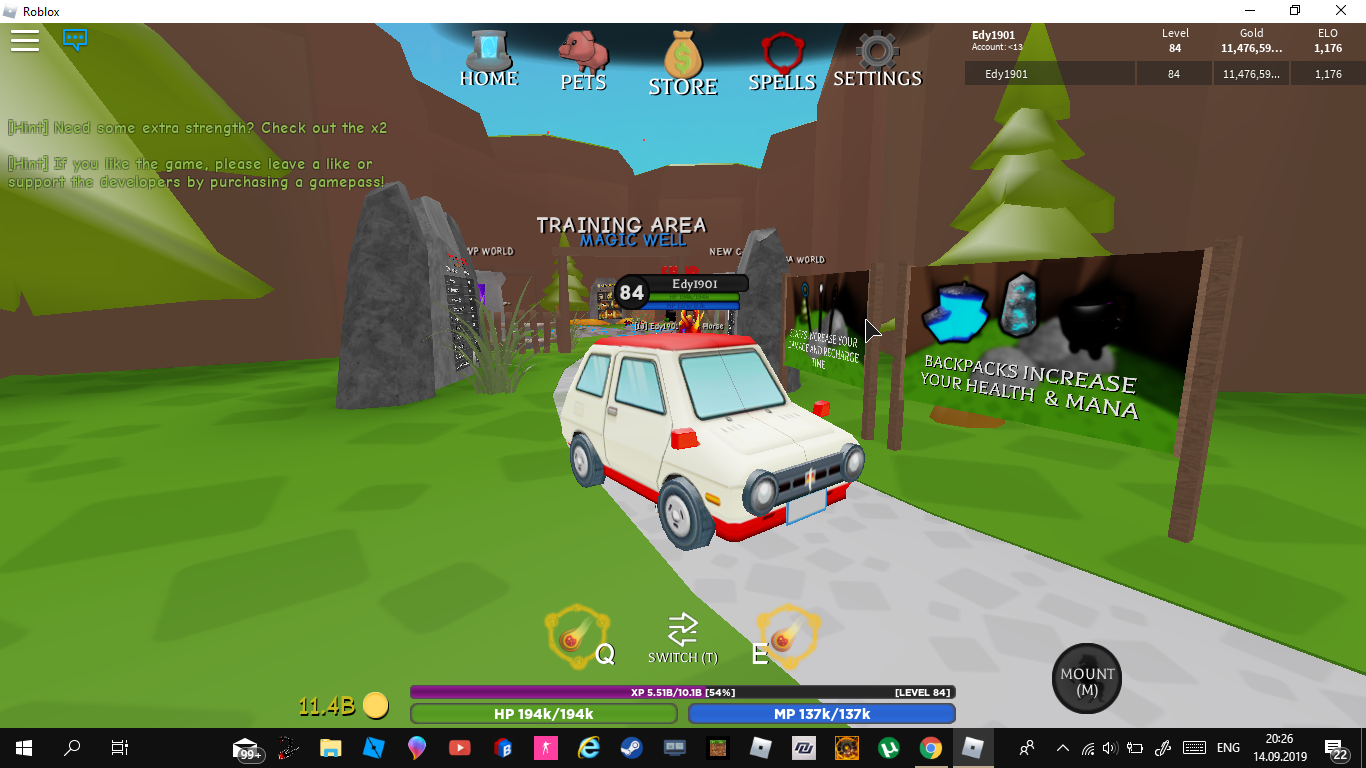 Mounts are pets you can ride that help you get to locations faster.  You cannot use them during battle though.

They are the same numbers of tiers as pets, and well, the same tiers. 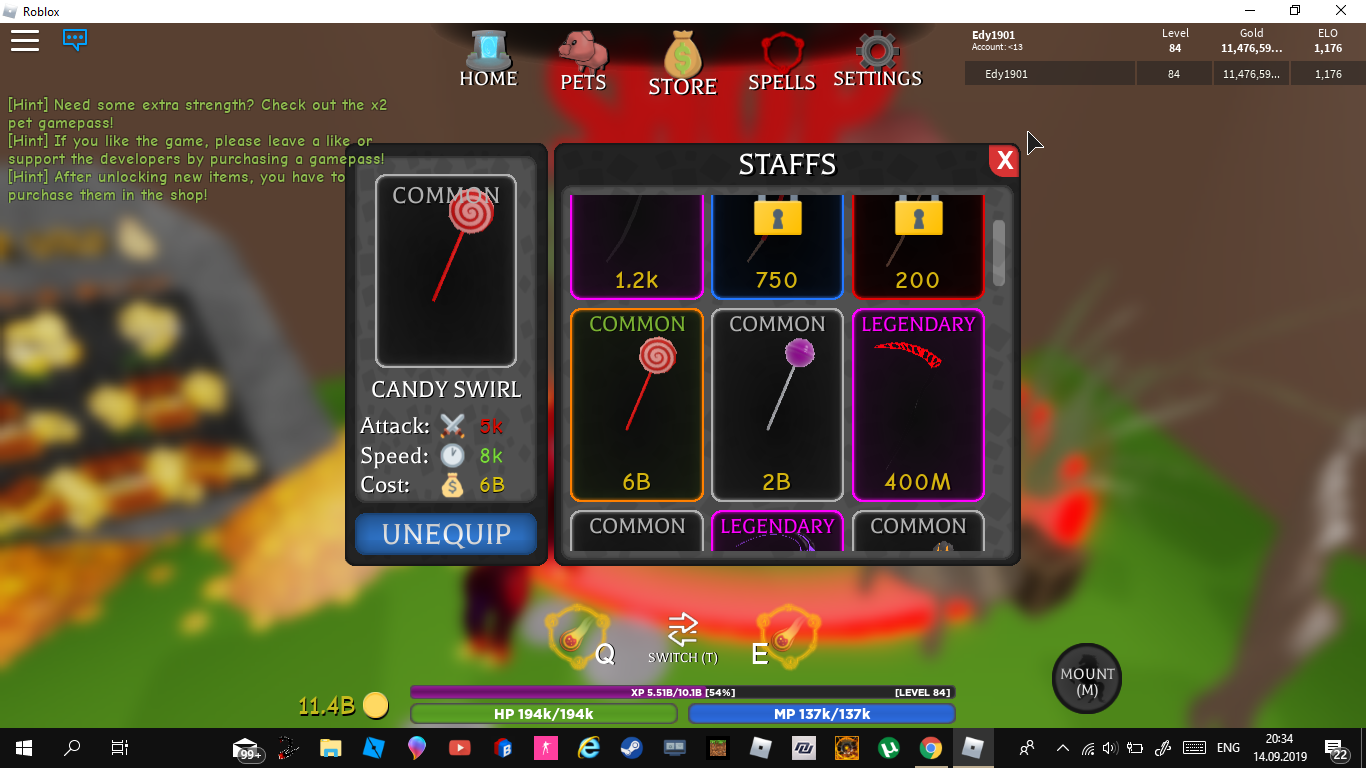 Backpacks and staffs are the stuff that help you get better at the game, first of all we are gonna talk about normal staffs and backpacks.

Every staff and backpack is different its better or worse, every map has its own staffs and backpacks.

Now, drops. They are usually better than normal gear and there are 3 tiers of them.

The legendary gear is always worth more than the best normal staff and backpack.

You get drops from killing any enemy from the specific map, since every map has completely different drops. 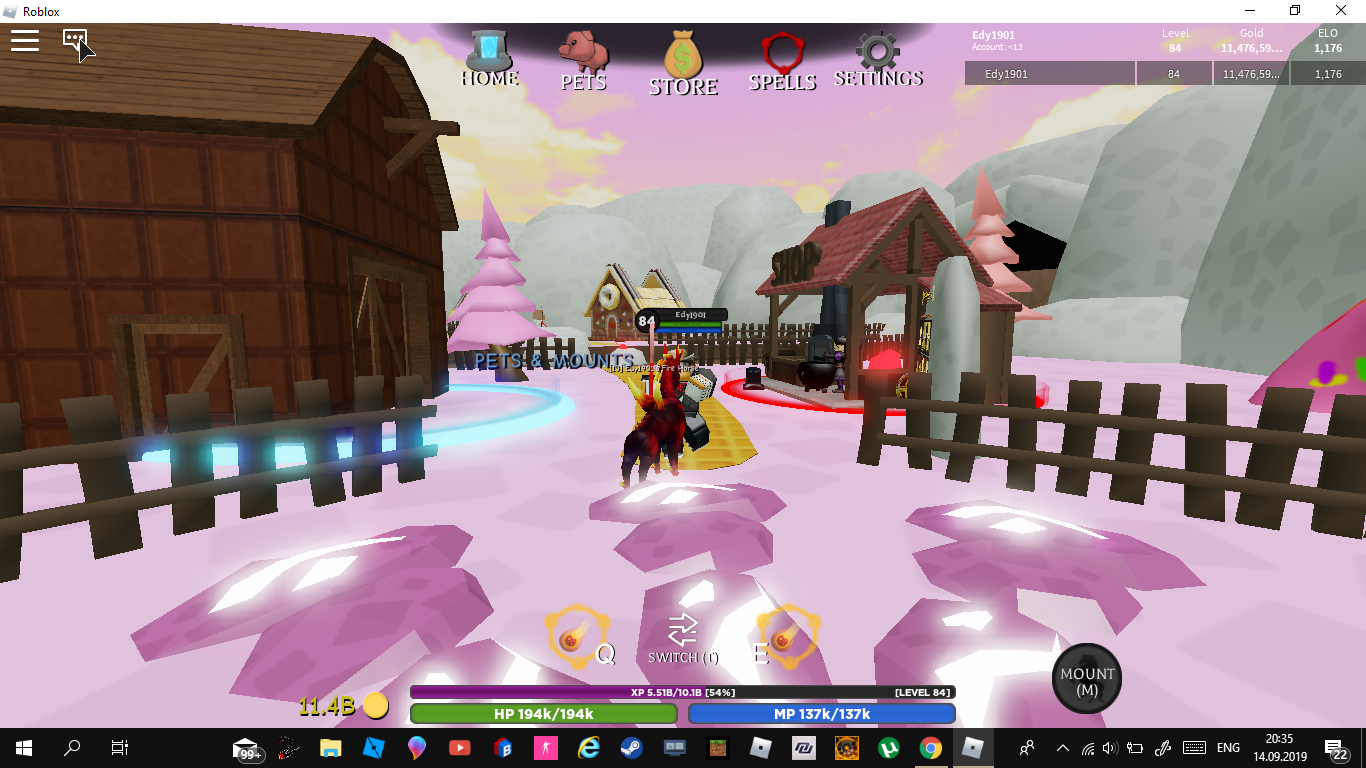 So, is the game good? Yes, it is in my opinion, some people dont like it and some do, and personally im one of the people that like it.

Its a well made game and has 5 maps. And its a pretty unique simulator, its more of an rpg game to be honest.

It has a lot of stuff in it and the creators are active, working on the  game.


Hopefully i encouraged u to try it out if u didn't already!

(oof i spent a hour writing this and its prob not gonna get accepted. ;-;)

I played the game and its actually good

I don't like simulator games on roblox because there's alot of them, but good job with this article.

Sorry but this game is hard :/

But I love Roblox!

it requries a lot of time

roblox its not good