Tales of Vesperia tells the story of a rebel young man named Yuri Lowell from the Imperial Capital named Zaphias. Yuri and his dog, Repede, live in a part of the city named Lower Quarter, the zone that is considered to be filled with poor men and women. He grew up in the Lower Quarter with his friend Flynn, a royal knight who dreams to become a Commandant of the Imperial Knights.
One day, the blastia from the fountain in the Lower Quarter is stolen, and Yuri decides to leave his town and goes after the core thief, so that he can get the blastia back and bring it back to the Lower Quarter. And so the adventure begins. This quest would bring Yuri Lowell a lot of friends to fight for his side, and of course a lot of enemies. After Yuri catches the thief and retrieves the core, the quest changes from taking back the blastia to saving the world from the "Catastrophe" that was brought back by the Head of the Imperial Knights, Alexei.
There were two ways to eliminate the Catastrophe, the first was Yuri's plan to use every blastia in the world against it, and the second was Duke's plan, to use the life force of every human on Terca Lumireis (The world). The last battle will be against Duke, known as the hero of the Great War, a war that was between Entelexeia and humans.

Playing as Yuri Lowell, you start off with a sword and a basic arte named Azure Edge, but along the way you will discover more weapons and more artes. Some artes can be obtained only from weapons. Each weapon has skills that you must rely on when learning a new arte. Once you learned that arte, you can unequip or change the sword and you'll still have the arte. Along the way you'll have other teammates in the party, and that means you can change from controlling Yuri to Estelle, Raven, Rita, Flynn etc.
The game has side mission that reward you different things, from items and gold to costumes, that the characters can wear. Once the game is completed, you can start a New Game+ that lets you keep either items, artes or even both of them, if you have enough points from the last playthrough. 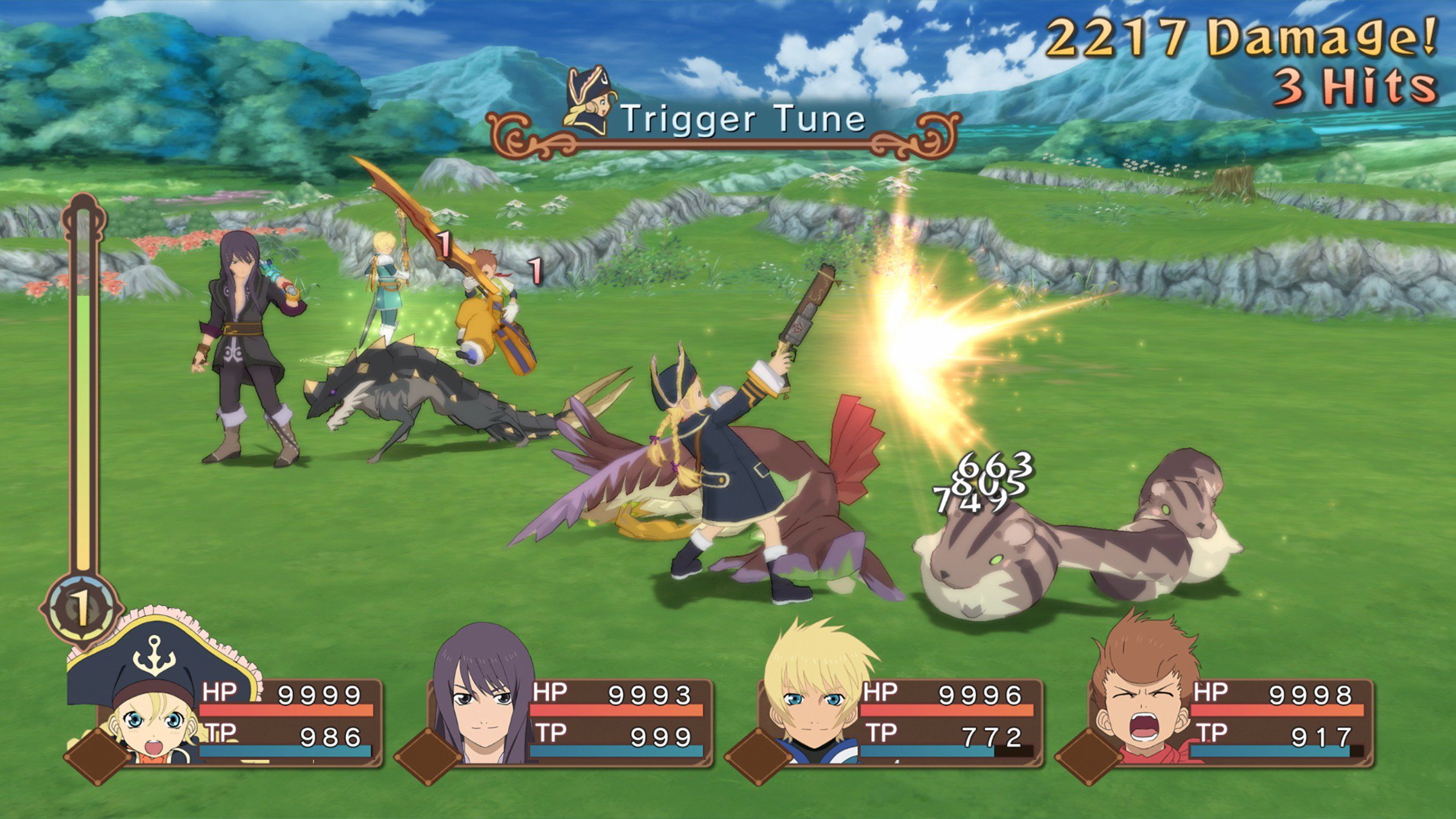 Doing the main mission is not necessarily the first thing to do in this game, you can do other stuff such as battling monsters to level up, crafting eqipment to make battles more easier, doing side missions, minigames etc. By doing missions and side missions, you recive titles, and those titles can sometimes have a costume attached to it.
In the original game, the one from Xbox 360, you only had a couple of costumes that you could get, now there are many more in the Definitive Edition. There are also DLC's that include costumes from other "Tales of" games, and all of them are free. 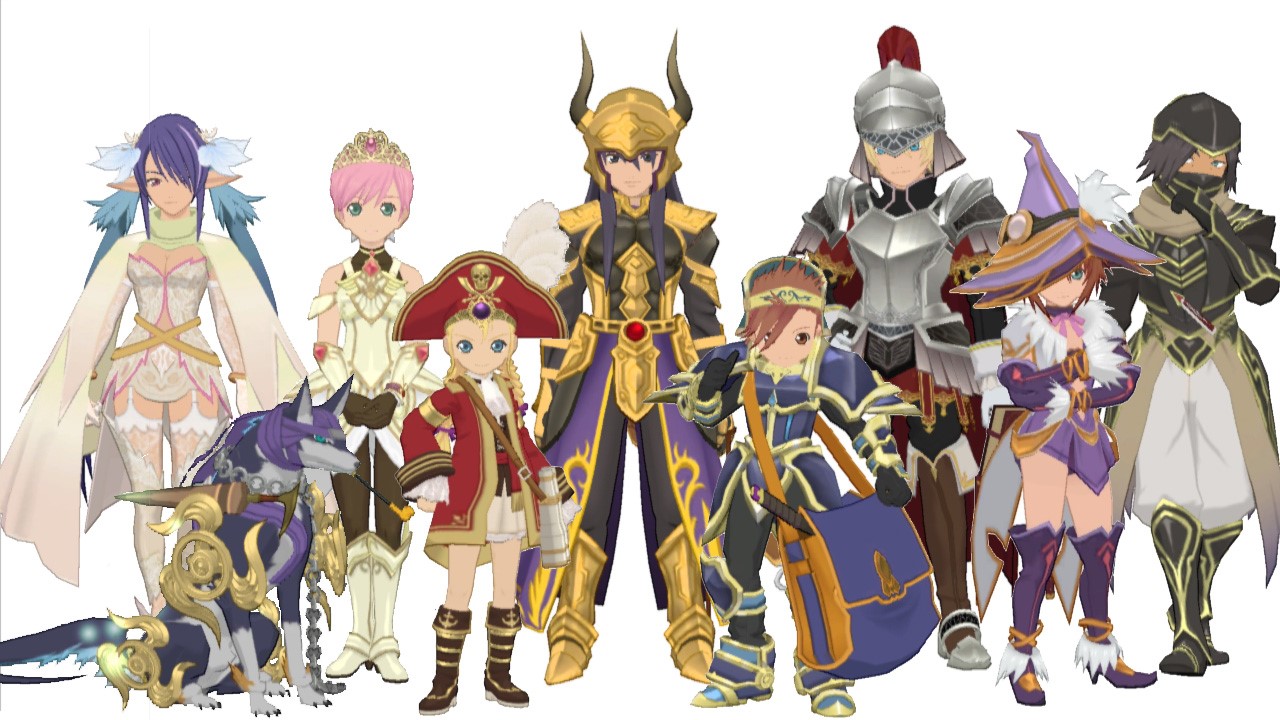 There are various types of enemies in the game. Each biome has their own type of enemies, for example in desert you will find Druids, Sand Thiefs etc. There are also human enemies that you will encounter along the way, not only monsters, but their attacks are the same.Besides the monsters, you will eventually encounter bosses and mini-bosses, and some bosses are available after the end of the game.
There is a place called Nordopolica known as the colliseum, where you fight a lot of enemies and bosses at once, at the end being a prize that depends on the difficulty you've chosen. There are many difficulties that you can try, but the last one is unobtainable until the near end of the game.
The last one, named the 200-Man Melee, is the hardest difficulty, at the end it contains bosses that appeared in other "Tales of" games, such as Kratos, Killer of Heroes, Dhaos etc. 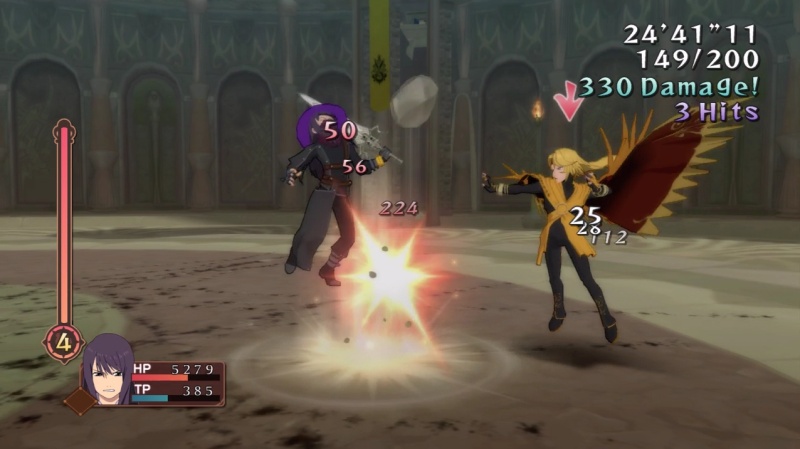 Combat, Over limit and Grades:

The combat in the game is basically button mashing, until the enemy is defeated. While in combat, you can perform combos by combining your attacks with artes, and vice versa. After a certain part in the game, you'll get a cutscene where it is introduced the Over Limit.
Over limit allows you to attack and cast artes continuously, until it runs out. After the over limit bar reaches zero, it will charge back by damaging the enemy and from taking damage. Over limit also allows you to perform a Burst Artes, a powerful combo that depends of the level of your over limit.
The higher your over limit level is, the stronger the combo will be. The fourth level of over limit allows you to perform a Mystic Arte.
You will notice in the game that combos give you Grades, and those grades are beneficial because, as I said at the beginning, when you will start a "New game+", the total amount of grades you've managed to get will add up and you will be able to use them to keep either items, artes or both. 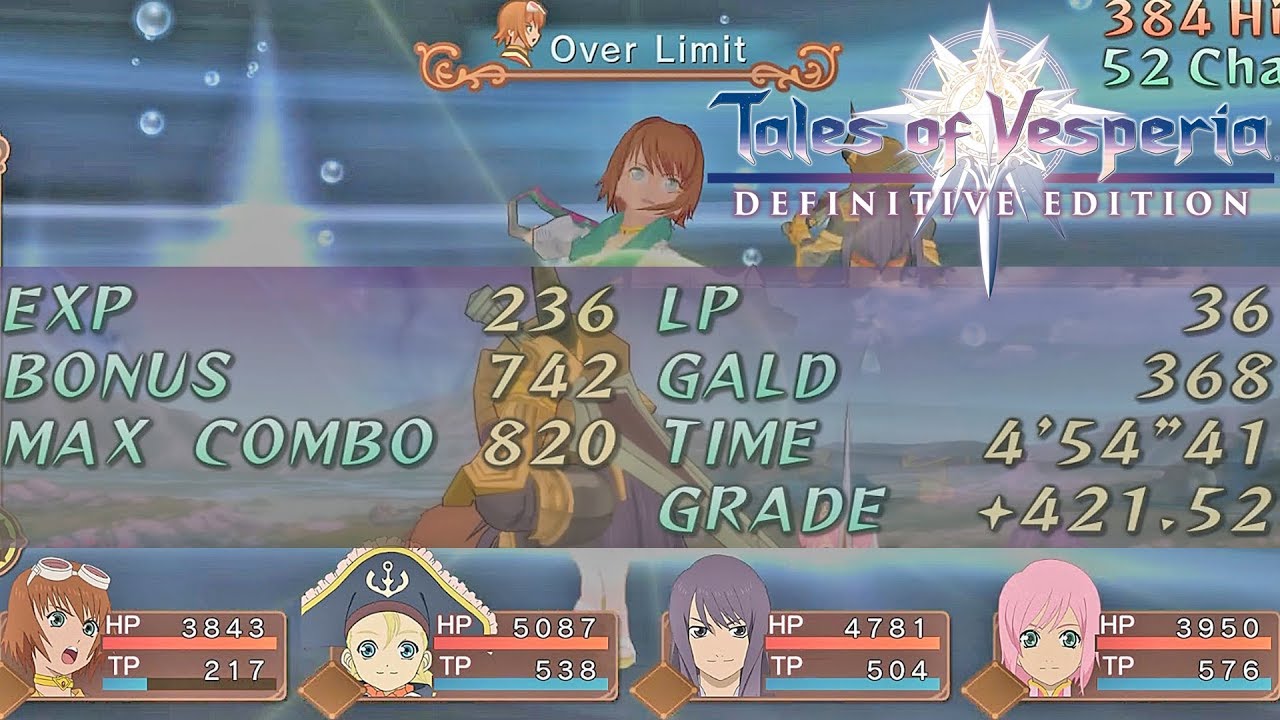 The game is really nice, the developers put so much effort into making it possible. This version of the game was released only in the PS3 consoles, but you could've played it only in Japan. But now it's available for everyone everywhere. I played the first one that was released on Xbox 360 around 2008, and man I enjoyed it a lot back then. In my honest opinion, It's a fun game and you should give it a try!

Thank you for reading, and have a great day!

so i had already played tales of vesperia before on my 360, what i can say about this game is that although it is not a whole/complete game it is good with whatever is is 6/10 would play maybe again

so i had already played tales of vesperia before on my 360, what i can say about this game is that although it is not a whole/complete game it is good with whatever is is 6/10 would play maybe again THX

good article, but not really my type of game. I don't really like button smashing game

this is good article

this game is awesome this article is a well done

Thanks a lot to lets the community know about this. A very helpful article!