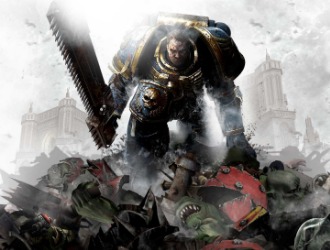 Although Relic Entertainment was primarily known for strategic games (such as Company of Heroes or Dawn of War), it definitely managed to produce a TPP action game set in the Warhammer universe.

Warhammer 40,000: Space Marine is a space fantasy game in which we'll take on the role of Captain Titus. As a member of one of the Marines legions he is famous for his training and great brutality (which justifies the bloody nature of the game). Along with his comrades, he must fight the Orcs attacking the Empire.

The main focus in Space Marine was to evenly balance the shooting and melee. The model of the combat has been additionally designed to eliminate complex sequences, but leave the game dynamic.

From the graphical side Warhammer 40,000: Space Marine looks great. The details are faithfully reproduced and maintained in the convention of the universe. Perfectly selected music and sound effects add the realism of the game, providing us with unforgettable gameplay.