Rate this article "Review South Park: The Fractured but Whole"

South Park: The Fracture But Whole is the game about the new adventure of Cartman and his friends on PlayStation 4, Xbox One and PCs (via Steam). The game is a direct sequel to The Stick of Truth and continues the saga of the character Novato in a new game, this time as a superhero in pursuit of justice. But the theme was not the only change in the series. The title updated its original formula with tactical combat and even more offensive jokes. However, were the changes enough to make RPG more complex?

South Park The Fracture But Whole begins exactly where The Stick of Truth ends. With his great flatulent powers, the Novato becomes King and continues as protagonist, but the medieval play is suddenly canceled for a more urgent call. When evil threatens the city, Cartman summons the group of Racoon and Friends to solve a mysterious case of disappearance. The idea, which at first seems altruistic and inspiring, is in fact only an attempt by the boys to file their own series of heroes on Netflix.

However, they still have other problems to deal with. Internal conflicts during the choice of who would have his own film separated the friends in two teams, which initiated Civil War between the group of Cartman and the Friends of the Freedom, that are in the control of Jimmy. 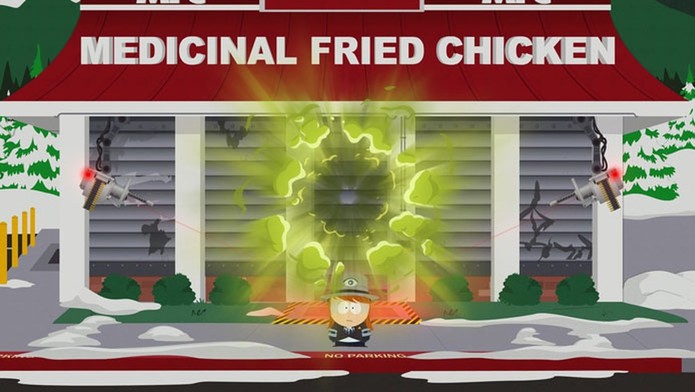 Whether you're a comic book fan or a rough-and-tumble humorist, South Park: The Fracture But Whole promises to win an audience that goes beyond fans. There is no lack of jokes or debaucheries in this sequence. Heroes of Marvel and DC are mentioned at all times, there are references of several episodes of the animation and the series bridges with the game in the episode Franchise Prequel of the 21st season.

Same as original, only better.

This new South Park makes you think before entering any fight. There are a number of advantages and disadvantages to exploring on the field, by you and also by the adversary. Here, negative effects are a real threat, especially if you run out of healing items or support powers. The scenario is also interactive, which only adds positives to combat. Flammable barrels and fireworks can warm things up before the fight even begins.

The combat follows the same pattern in shifts of the previous title, but with significant differences. The characters now move in squares across the field, remembering RPGs as Final Fantasy Tactics. And for a little detail, a range of possibilities opened up for the game. Attacks reach different (squares) areas and can fling opponents, pull allies close, or even swap place characters. As a result, the level of difficulty also increased considerably, but this new organization was not solely responsible for this.

The power of flatulence

One of the most striking changes to the gameplay comes from the choice of classes. In South Park: The Stick of Truth, the player could choose only one during the whole match. The Fractured But Whole is different. In addition to allowing class switching at any time, it combines four superheroes into one. You can use the powers of all of them to create combos, with maximum limit of four attacks, one of them being a special blow with animation. 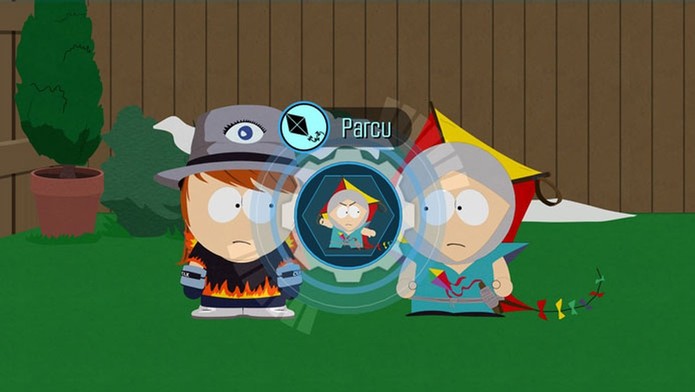 Imagine how many strategies you can put together for each boss. The player has a total of ten classes to merge, attack skills, defense, support, and bonuses to use on you or your teammates. That is, there is much greater freedom and flexibility.

Along with the new classes we have the system of Artifacts. In place of weapons, there are items that offer bonuses for specific attributes and attacks, such as critical damage, intelligence, and more. The game also included a way to call allies with Invocations, such as Moses, and made a point of developing the Novato's flatulent power to a level beyond time and space, literally.

Temporal Fates are their main power, capable of changing the flow of time. They are used in combat, to skip the opponent's turn, or outside, to pick up items and solve quests. Another hero function is the Inspection Mode, which analyzes the scenario and invokes other characters.

Unique actions are unlocked when the Novice unites his the power of flatulence with the special ability of each hero of his team. From there, new functions like Parcu (Pipe Man) arise to climb in high places, the Sand Jet (Tool) to clean lava, besides others. 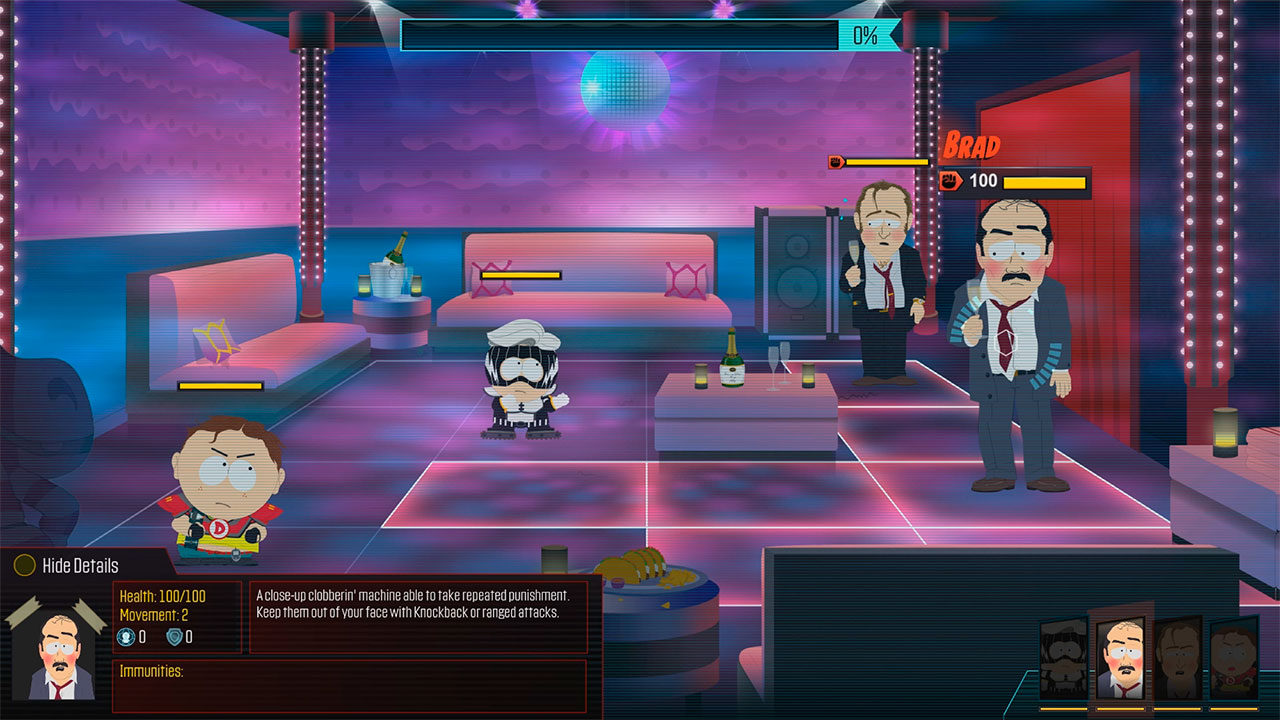 The manufacture of items presents the same model of The Stick of Truth, however, with an organized inventory without an exaggerated amount of items. Objects are grouped into components for the production of Invocation scrolls, mission items, consumables, and costumes.

The rain of characters is another full plate for fans of South Park. On the side of the Racoon and Friends we have the Human Pipe, Mosquito, Super-Craig, Quick Step, Captain Diabetes and guests, like the Woman-Dial. Tweek, Mysterion and other Friends of Freedom also fight alongside the protagonist in memorable scenes. All the other characters in the series, including PC Director and Morgan Freeman, mark their presence in a unique and hilarious way.

The main menu of the game is Novato's mobile phone, which can be customized with different colors and even scratches of use. Unlike the previous title - and thanks to the evil actions of Professor Chaos - the characters exchange Facebook through Guaximgram, an Instagram of the group.

The player becomes popular by taking selfies with people who consequently follow him on the social network. But not all the residents of South Park are going to take pictures of you for free. It is necessary to complete missions or perform small "favors" before being popular on the internet.

As much as history is the strong point, it is also its kryptonite. Not by content, but by the linear way it is told. The Fractured But Whole offers no alternatives to tackle a mission - with the exception of combat tactics - and has very easy tutorials. If you do not know how to perform a certain action, do not worry, the game simply scrubs it in your face. 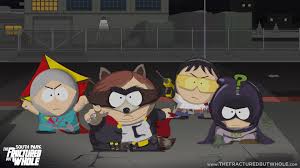 In contrast, this is one of the funniest episodes of the franchise. If you look for the dark humor characteristic of animation, expect the worst, in a positive way. The jokes are more cruel and offensive to all social groups. The presence of the school principal, strip club and sins inside the church are just the tip of the city's iceberg. Swearing, gratuitous assaults, and foul play are the essence of the game.

The Fractured But Whole will mock your character for any reason. And to prove it, now the game allows you to define a complete card of its protagonist. You can choose skin color, sexual orientation, gender identity, ethnicity, and more in extremely embarrassing and immoral scenes. In addition to a series of funny easter eggs.

The game even implies that you are using a detonated to pass. This happens early on, when the Rookie needs to find the password for Cartman's hideout. If you type the password without finding it in the room it will call you "snobbish and snobby."

The Fracture But Whole is the true South Park experience. The game is replete with references from past seasons, brings all the characters the fans love (or hate) and combines everything with a great tactical combat system, varied classes and a more rotten mood than Kenny's yard. The game still sins to leave the development of the plot very linear, but you can be sure that there are enough jokes to compensate for any defect.

Rate this article Review South Park: The Fractured but Whole