Rate this article "Review of the game: Bloodborne"

Review of the game: Bloodborne

What is the charm of this game?

If you have not play it before, I have four keywords that make up the essence of this unique RPG experience - challenge, freedom, mystery and diversity. I will clarify them below.

The basis of Souls games has always been a challenge through the context of matching players with a very dangerous dark fantasy fauna. Bloodborne is no exception here - I can say without a hitch that From Software has never delivered such a heavy game to the players before. Unlike some Dark Souls, there are no shields and heavy armor. Forget about the "turtle tortoise". Gameplay has been redesigned and designed to play aggressively and be compelled to anticipate every opponent's move to avoid them in a timely manner. While you once with a strong armor may have survived a certain direct blow, you are a hunter or going to be hunted in Bloodborne. Yes, a dull sentence, but actually perfectly draws the main premise of the gameplay - or you will play bravely and aggressively to throw your opponent to your knees as soon as possible or you will try to defend yourself defensively and ultimately surely die.

At the beginning, there is a lot of adaptation to such a gameplay, but once you get settled, you will hardly ever need shields. The feel of destroying the monsters in Bloodborne is simply a much better and more juicy experience than any earlier Souls game. What needs to be emphasized here is the fact that the loot is significantly lower - you will have at your disposal a handful of weapons and several sets of armor, but this is not just a coincidence. Each weapon you use will give you the specific tactics that you can apply to specific opponents. For example - the ax is usually a slower weapon, but for greater damage, and by pressing the L1 button, it can be transformed into something that you hold with both hands and with which you can quickly solve larger groups of enemies from a greater distance and with a large amount of damage. 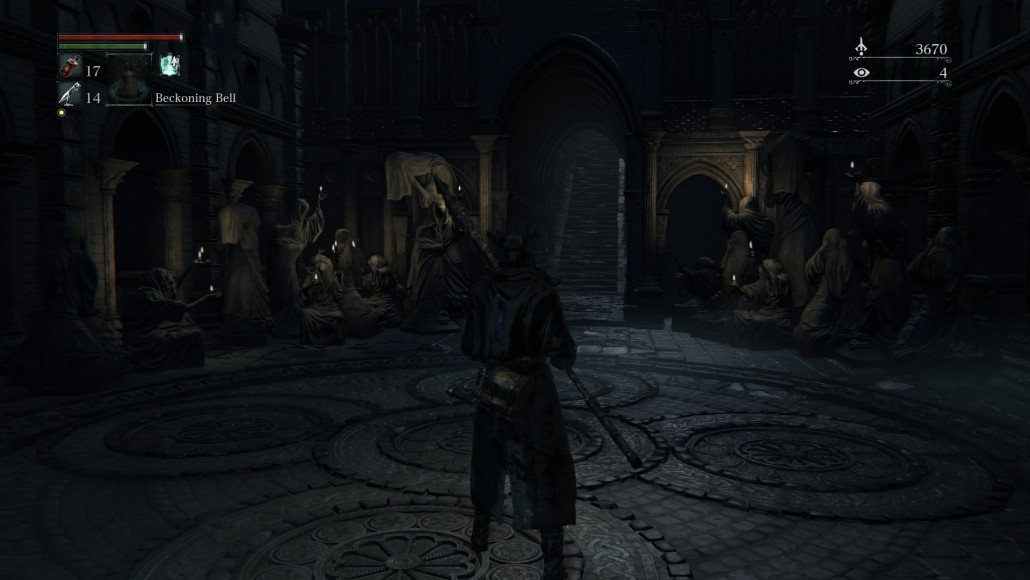 On the other hand, some sort of saw cleaver is a much faster weapon that is very killer in pair with a gun - except that with a higher level of stamina, slower opponents do not have air from your numerous blows, you can even with their guns stop the attacks once they reach the air. And not just stop them from attacking, but disable them for two seconds - a time frame in which you can perform the so-called. a visceral attack that performs an extremely large amount of damage. This is, for example, a very useful thing in a boss fight where every opportunity for a murderous counterattack of is worth gold.

It's fascinating to me how much the Japanese studio managed with Bloodborne to improve the already fantastic Souls gameplay formula. In the game, players who play very aggressively, but at the same time very thoughtful, or understand the tools at their disposal, are the most profitable players. Their game then stops being heavy and becomes an incredible gameplay experience where the boss of the fight is really something special. Each ugly is a story for yourself and you will remember the fights with them long after the end of the game.

Like Souls games, Bloodborne does not have any defined route you need to go. Of course, you will be able to reach some locations only after killing certain bosses, but as a rule, the player goes on a route that you specify. How does this affect the overall experience? So you will not see all the bosses in any pre-defined order, which means that you might be difficult to compete against other players in a fight, while others will be very simple. Similarly, you will not get all items in the same order, which means you may at some point miss a piece of the story, and in the second, you will all be perfectly cliched in your head. In translation, you will not have the same puzzle Yharnam that someone else has. 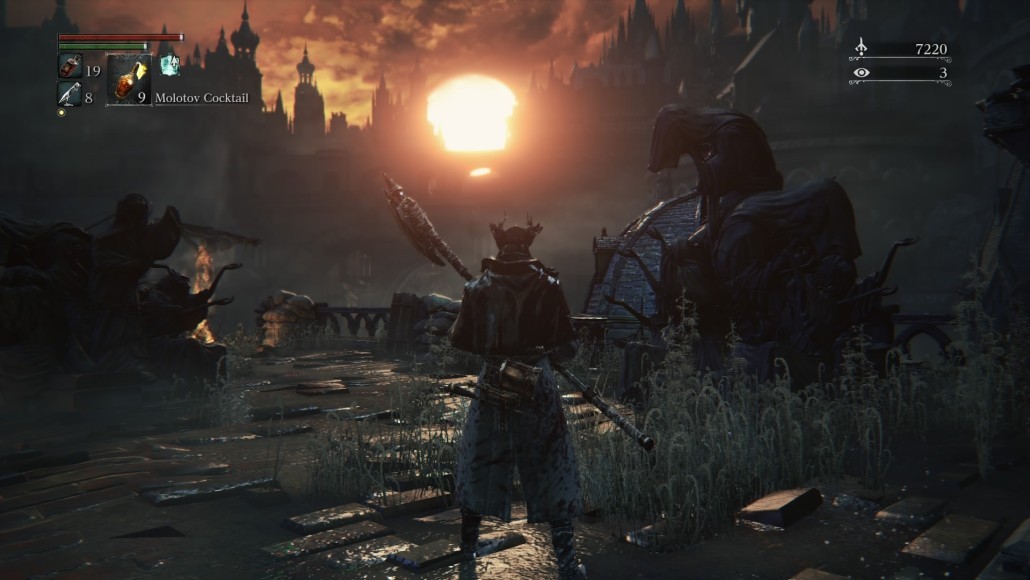 And that's just like the predecessors of Souls, the main charm of this game. The player is left with his own curiosity and imagination to answer the questions that open up on his way. Bearing this in mind, it is logical that some players will not even open up any questions or ask for answers. Others will dig every piece of Yharnam and smash every watch to see if they find something interesting. The decision is left to the players.

It is precisely the enigmatic possibility of a personal interpretation of the world best emphasized in attempting to decipher the mystery with which Bloodborne is painted. As in Souls games, there are few details of the stories that are transmitted to the player directly through some dialogs or video sequences. What you know is the following: you are thrown into the Victorian city of Yharnam, who is covered with sickness, you woke up in the clinic, they tell you that you are a hunter and that's it.

I remember how many before Bloodborne came out commenting that the game could suffer from odd places. And that would probably be the case with 95% of other developers, but From Software has some really genius level designers. Regardless of the fact that you spend most of your time on the streets of Yharnam, each location has some sort of line, nerve, atmosphere. Call it how you want it. For example, while the first quarter of this city is something like those dark streets of London in the early 19th century, the central part of the Yharnam will leave the impression of a gothic dark fantasy place that pushes the dam deep into your bones. 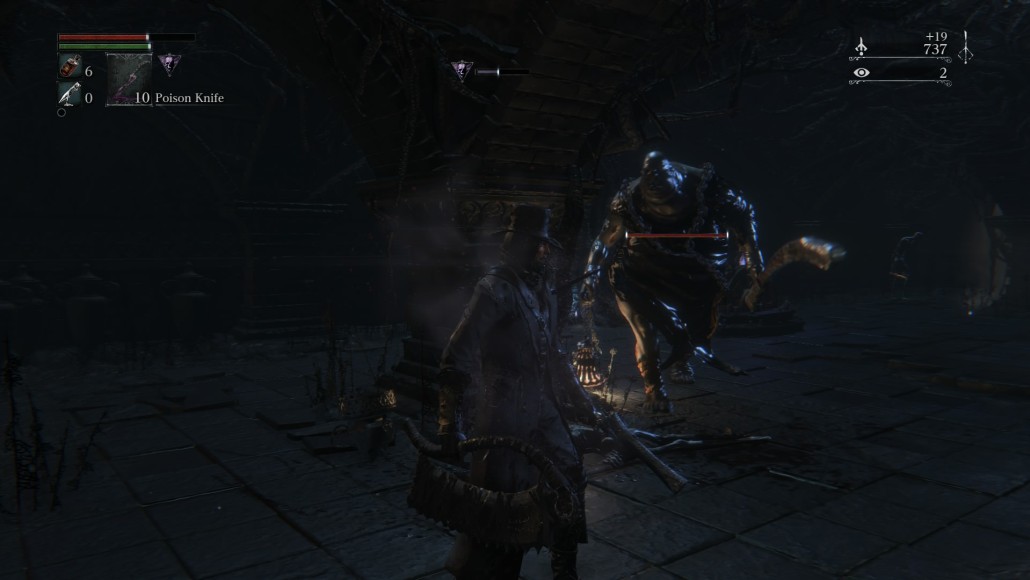 This diversity is also noticed in the enemy. The developer has managed to bring a really diverse fauna that you will rarely find in an RPG before the players. Not only do they look great, but each opponent has different challenges and when you see him for the first time, you always need to be the most cautious, because you simply do not know how the way will exactly be attacked. Anxiety, tension and sweaty hands will often follow you in Bloodborne. When you complete these feelings with some knowledge of the game world, you come to that unique Bloodborne experience that makes this game worth every second of your time.

Beginning with the fantastic interweaving of the sites that leave the impression that you are really in this great city, through a fun cooperative fashion where you can explore with your friend the secrets of Yharnam and all the way to the chung dungeon, which are in fact procedurally generated levels made with the goal that you can always return to this RPG -u. There are a couple of minor minuses (longer loading, occasional drops of framerate), but this is the end of everything else in the game is completely negligible. It is only important to point out that Bloodborne offers 40-60 hours of superior RPG experience and much more if you start with the New Game + Game Mode. 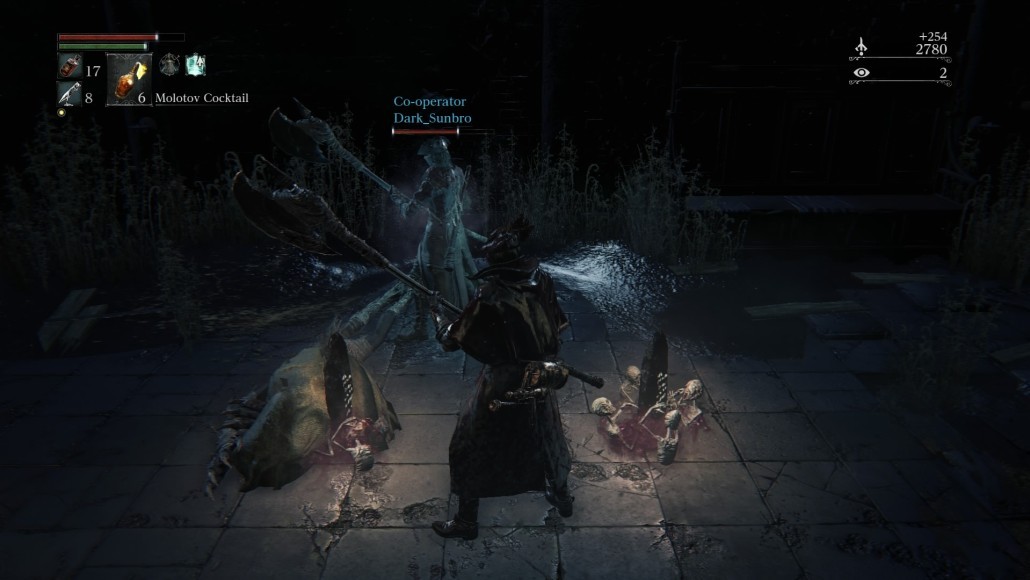 I have to be honest - it's very difficult for me to summarize game genius in these couple of tabs. It is generally difficult for me to describe all the feelings that the game has caused in me. You just have to try and experience this yourself. There is no similar game on the market - Bloodborne offers a mix of challenges, mysteries, freedoms and diversity that you will find very hard elsewhere elsewhere. Of course, I did not manage to mention everything in this review.

Rate this article Review of the game: Bloodborne

I haven't played it yet.

Who else read the article and didn't care about the game?

aghhh.. bloodborne.. one my favourite games (like dark souls, borderlands and overwatch, and assassin's creed) I really love this game. It's difficult, dark and challenging. Just like dark souls or demon souls

This game is fantastic imagine dark souls but more GOTH and brutal. and i like the fact he always has the same weapon through the game right :D