Note: Due to its artwork this game may not be suitable for players under the age of 16. The game itself doesn't contain nudity but the character design can be found little aggressive.

The long wait is finally over and Destiny Child got its global release. Published by Line games and developed by them and ShiftUp. Now players who like slash-battle card games, such as Grand Sphere, the long gone Devilmaker Tokyo and Age of Ishtaria, can enjoy this title fully translated in English and French.

The game supports linking your account to platforms such as Facebook, Line or Google, if you want to store your data online and change devices. 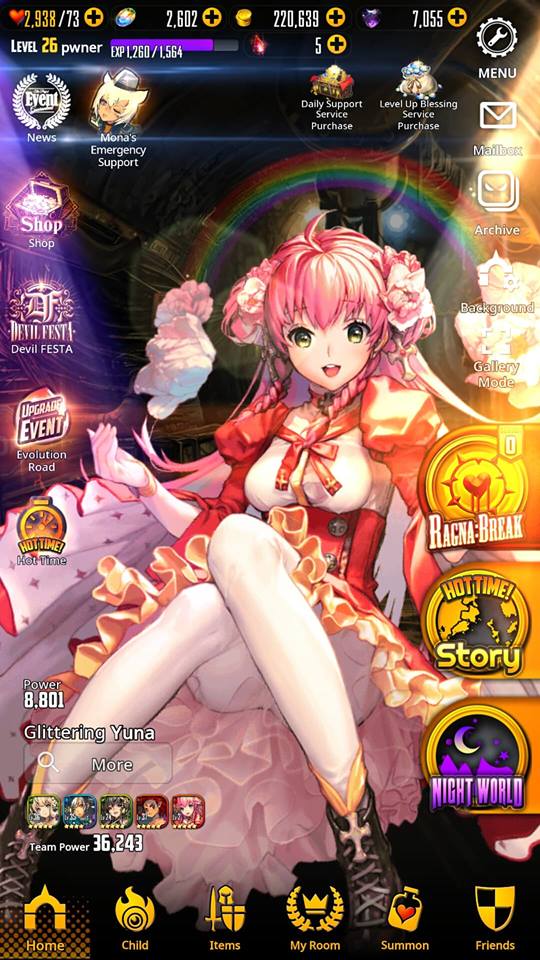 You take the role of an young demon, who got bored living in the demon realm and came to work as a part-timer in the human world (similar to the protagonist in the anime “Devil is a part-timer). Suddenly he got tricked by succubus, called Mona, and applied to a contest that will crown the next ruler of the demon’s realm.  This goes through fighting a lot gods and characters from different mythologies such as Loki, Diana, Artemis, Frigga, Persephone, Merlin and etc.

Destiny Child is a 2D slash-battle card game . The graphics are quite good and the battle screen is pretty dynamic and smoothly combining sound and visual effects.

The units are gathered by a gacha system, events and completing quests and tasks.They are called children. Your team consist 5 of them and one is set as a leader, boosting the party with its leader skill. Each unit has element affinity and since its leader skill buffs units with same element, mono element squads have advantage in this game.

There are five elements your child can be: fire, water, earth, light or dark. This system is often used JRPG and SRPG games. For people who are not familiar with it I will explain how it works here. Unit with fire element will do 25% extra damage on a unit with earth, but will do 20% less on a unit that is water based. If the enemy is light, dark or other fire there won’t be any change in its normal damage. 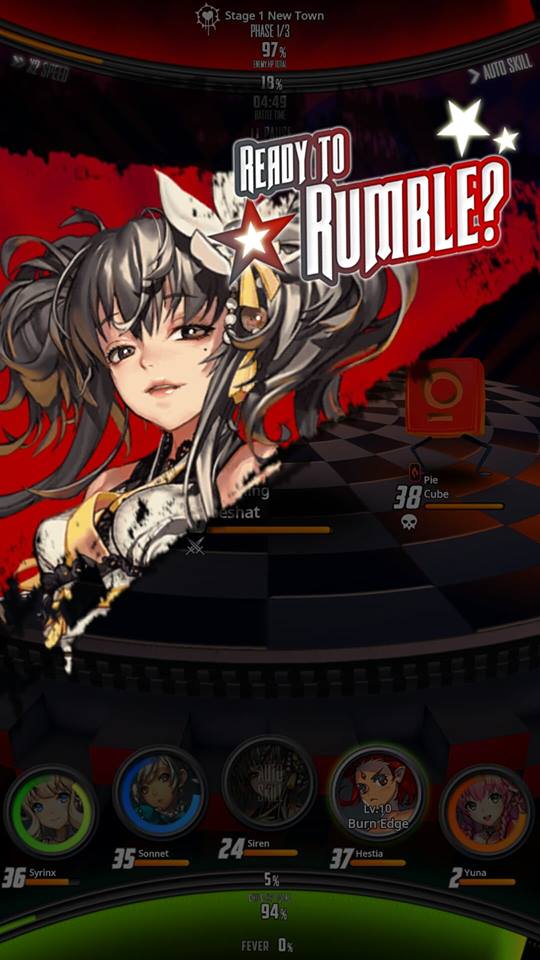 Also the children have classes – Attacker, Supporter, Debuffer, Defender, Healer.  I haven’t found if classes have advantage one against another. The classes basically define unit max value of stats and their skill types. Supporter class have skills that can buff other characters in the party, while healer’s skills will recover lost health points of the other team members.

Each character has 5 skills: tap, slide, drive, fever gauge and leader skills. During the battle each of them has its own cool down time. They can be leveled to level 10. You can also raise the grade of the skills and level them with 10 more levels by doing recap of this unit. To recap a child you need the same one.

Units rarity goes from 1 to 5 stars max. To get 5 star you must either evolve max level 4 star unit, or draw the gacha since it gives from 3-5 star units only. However getting 5 star from it is very rare(or atleast was for me). Here I must also say the game is pretty generous for people who aren't willing to put a cash on it. Of course with real money you can buy packs or game cash(crystals), which will give you fast results, but doing just the daily quests gives 950 crystals and drawing 10 characters at once in the gacha costs 2700. Also there are daily login rewards and seasonal tasks that give quite amount of crystals. Makes me wonder how much time this generous game will last on the global market. 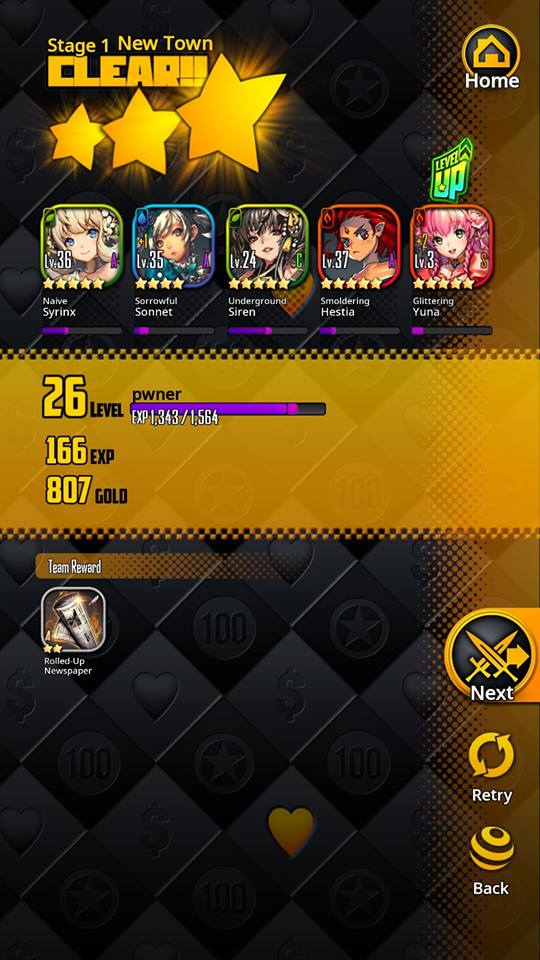 Leveling your team is a must since on a proper level you will have the option to awaken them. That will give stat boost to the unit and a new look and extra voice speech when it is awakened to the highest S grade. Also through this system you will go through extra scenes with this unit, most of which are pretty humorous.
Running stages gains little experience for the unit. Best place is to get leveling items from the event dungeons found in the "Night World" tab.

To further improve your child you can equip it with 1 weapon and 1 armor. On the S grade of awakening, its accessory slot gonna be unlocked. These gears can also be enhanced and the their stats raised that way.

The story goes through 6 chapters, each of them with 8 sub chapters holding 4 stages, so you must fight your way through total of 192 stages. Also there are 3 difficulties available – easy, normal and hard that will keep you occupied if you decide to play the game more serious.

The battle’s graphics are pretty good. We have the option to increase the speed to 2 times the normal battle speed. Also auto play with casting skills is available.  On the upper side of a screen, developers made a bar that show us the total health points of all enemies that are alive, a feature I never seen so far in such type of games.

The next good thing about the game is that we can see our team combat power as a value, and also we get the combat power of the enemies  we gonna fight with. That give us the opportunity to compare both values and decide if to spend stamina trying it or do something else, since our actions are limited by our current stamina quantity.

PVP is presented as an arena system called “Devil’s rumble”. There we get a list with 5 players. One of them is with hidden team's units and combat power, making our winning streak gain harder. However most of the enemies are with closer to ours combat power. We can store up to 5 tries that are time rechargeable.

There are ranks and daily missions in the arena so it is interesting PVP system. The only negative thing I must say is all the PVP battles are not in real time. Your opponent is played by the AI. As a veteran PVP player these kind of battles kills my joy a little. 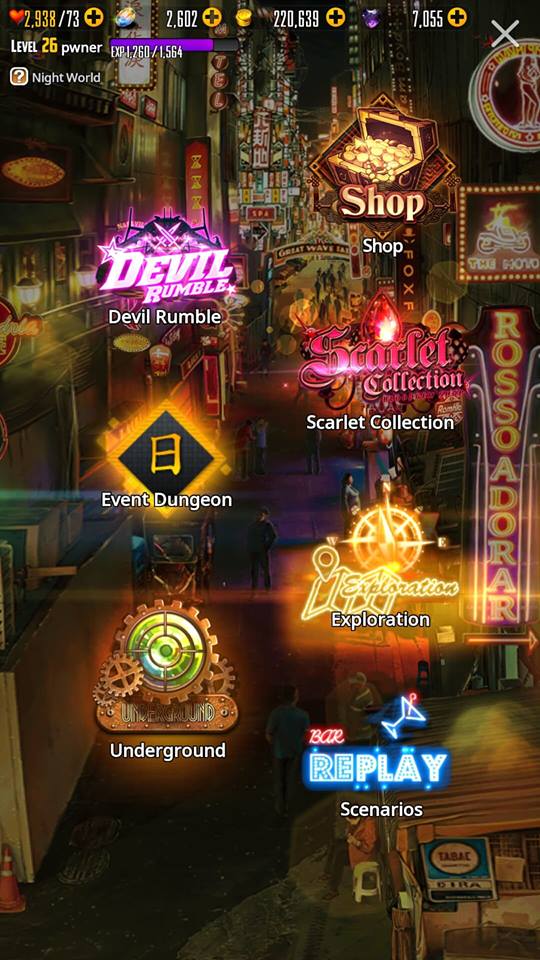 The tab where you will find “Devil’s Rumble” is called Night world. There players can fight alone event dungeons for gold, leveling and evolution items, rewatch again the scenes of the main story stages, set a team to a time limited expedition to earn experience and items or fight a stage progressing dungeon called “Underground”.

There are no guilds in the game yet, so your personal community is the players you add in your friend list. These gives you the right to send them friend currency daily, use their leader child for battles and joining the raid boss your friend discovered.

Raids are seasonal events, where you and your friends try to take down a strong boss, earning higher rank in this event or buy different kind of goodies in the raid shop. The rank raises by the points you get from fighting the boss but also each time one is killed the next one level will be increased by 1, making it harder. The interesting thing in this game, compared to others, is that the raid system here offers a set of stages, similar as a mechanics to the story quest mode.

Your units can change their look by equipping different costume. One you get from awakening the unit to the S grade, others you will obtain from different events such as raid. Probably on later stage we will see some more costumes in one of the different shops the game offers.

Also you have the ability to widely customize your main screen, setting different character as your favourite to appear on it, change the background, add different visual effects and event different background music, which at the moment is still in working process. 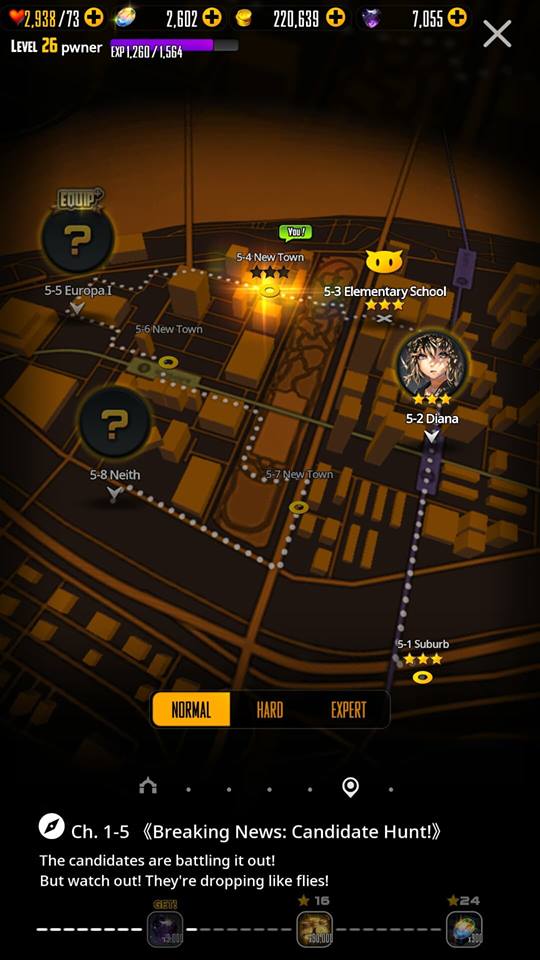 As you may have seen from the screenshots, the artwork is done by Hyung-Tae Kim, who is also responsible for the artwork in the Magna Karta series and recently Blade and Soul. In fact the character graphics look pretty similar to the ones used in Blade and Soul. The CG in Destiny child is very detailed and well made for a 2D game.

The game's music, is done by ESTi. It is well-known Korean composer, who also worked on the music for the gameplay of "Idol Master Cinderella Girl".
The characters’ voice sets and data comes in Japanese only. The two packages were around 240 MB and the players have the option to download them or not.

As a conclusion I will add that because of the lack of such type games on the global market, Destiny Child is worth a try. The only thing I didn’t like in it so far, was the lack of tickets to skip run stages, that will help you waste stamina bar. Sure you can run stage on auto repeat mode, but still it needs a lot of time. Due to that, at level 26 I have around 2900 unused stamina.

Personal Rating based on global release:

Good article! I've only played this game for a short while but it's nice!

liked this one, good work keep up XD

Are u kidding me?

Well written review that provides thorough feedback on each aspect of the game. Bonus points for the warning at the start! Accepted!

Thanks for the note at the begining. The game does look a bit creepy, but the article is ok.

too much on the screen

Yes from me
Keep up the good work :)