Now everyone can grab TotalWar:Warhammer on STEAM with a 33% discount and a FREE DLC provided by Creative Assembly to celebrate their 30th anniversary.
Find the official link below!

Total War: Warhammer, the Total War game that takes a different look than previous editions. Is the game interesting enough for the Total War enthusiasts, but also for the big group of Warhammer fans?

When starting, you must choose a faction. This is less difficult than choosing a name in an MMO, but it remains difficult. The factions are not only different, but they also play differently, have different units, different styles of play and their own difficulty. Just a small example of the depth of the gameplay:

- The Empire, the people can only take over territories of the Vampire Counts or other Human Factions, except the Norsca.
- Dwarfs, on the other hand, can only take over Greenskins or other Dwarf factions. Dwarfs can also use underground tunnels to conceal inaccessible terrain, or to dodge armies.
- As Vampire Counts, you can corrupt your enemy territory to cause problems in public orders.

If you have never played Total War game then this game is impressive. In your first fight, you will get a briefly explanation how to move your units, and how to attack, and all of this gets crammed into a folder. In this you got to see your own village, that of others, all the buildings you can make and give you bonuses. The skills of your Lords, the technological tree of your civilization, etc. It takes some time to keep track of how the game works, and what more explanation would be nice. 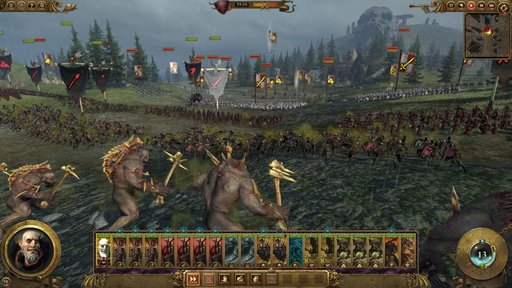 Unfortunately, it takes too much time to get through, because in this case you make a hasty or wrong decision. The enemy attacks you while your army and your Lord are on the other side of your village or map. You're losing your village by this simple attack, because your army was already somewhere else.

The learning curve in the Total War franchise has always been somewhat steep, but in Total War: Warhammer they again turn it up a notch. Every decision and move have a consequence. You must decide beforehand what you plan to achieve the desired result. The choice of units you build is very important. Archers are useful to damage slow units in advance, with a particular Lord you choose for melee units, because the Lord has a 10 percent bonus for more damage. If you choose a defensive line of meleeunits, you have to have some trick up your sleeves, because if not the other team can only come with flying units and you can not do anything about it.

Total War: Warhammer has no fixed playing mode. Do you find anything other than the actual battlefield interesting, and are you more planning and organizing? Then you can click Auto resolve on a large part of the game. This will lead you to the fight and get the results straight away. The chance that you win the fight if you're going to battle it yourself of course will always be bigger. 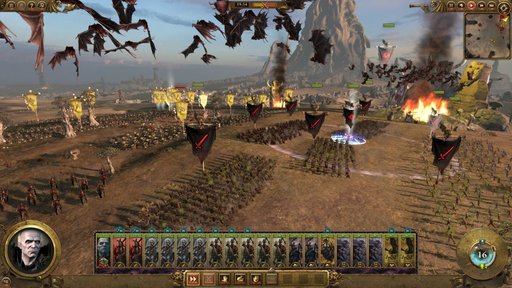 WARHAMMER. Creative Assembly turns 30 years old this month, announced the celebratory 30th Anniversary Regiments of Renown, available completely free of charge to all fans who own Total War.
Everyone interested in trying out this awesome free DLC can obtain it through a Total War Access account. All you need to do is surf to and register at: https://dashboard.totalwar.com/home and claim your free DLC for Total War:Warhammer as a welcoming gift.

Installing the DLC will add 30 brand new units to WARHAMMER. With a variety of new abilities and stats available, the 30th Anniversary Regiments of Renown will be a prominent addition to the five races it features in – the Beastmen, Bretonnia, Chaos, Norsca and Wood Elves Races will each receive the unique six units.

Even those who do not currently own the base game will automatically get a coupon that gives a 33% discount on STEAM. The coupon wil automatically arrive in your STEAM inbox after claiming the free DLC gift.

Creative Assembly is pretty good at developing RTS games, the amount of DLC still worries me though.

A huge franchise where I don't understand the difference between each game ;p