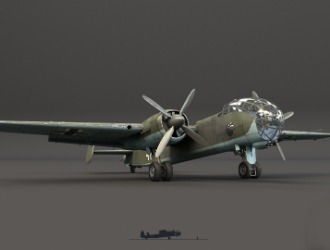 The game released in 2011 under the title War Thunder, is a simulator of historical vehicle clashes. The game was created by Gaijin Entertainment. This game was released in the free to play model. It allows you to fight battles on maps modeled after places of historical battles from the period of World War II. War Thunder allows you to take control of planes, tanks and ships from World War II and the Korean War.

The Ju 288C is a German medium-range two-engined bomber. This WWII plane was intended for a crew of four. The high-wing had a pressurized cabin for all crew members. Defense positions were remotely controlled, which gave additional possibilities to the plane.

The reward is the vehicle available only on Gamehag, it is a prize not available anywhere else!

Exchange your Soul Gems for the JU 288C now!