Kingdom Come Deliverance is without a doubt perhaps the most accurate game depicting medieval times. If there is one thing that they truly nailed, it is the architecture. It is so accurate that you could use the game to teach people about medieval Bohemia. The castles are indeed spectacular sights to behold. However, there are faults within the game. Clothing and armor is a big one. This could be due to the limitations of making armor in games, or because they based their armor off of that used by historical reenactors but it looks too bulky among other notable inaccuracies like eye slits that are too big. However, this is not what I will discuss in this article. Instead, I am going to tackle perhaps the biggest inaccuracy in the game the effectiveness of various weapons against armor.

The first type of weapon I will tackle is the bow and arrow. For the most part, it seems that they got them fairly right. Arrows are certainly a threat, but if you have sufficient protection such as a full plate harness, you can generally safely ignore archers. This does run contrary to what some believe about the longbow. Arrows simply weren't the instant killing devices that many of us like to think. Plate armor was effectively arrow proof with only a few gaps, and perhaps the eye slits or the side of the visor to aim for assuming the visor on the medieval helmet is down. Most accounts of fully armored men at arms and knights in full plate tell us that if they were killed by arrows, they were hit in the face likely because they had their visors up. Why would they have their visors up? Maybe to get a breath of fresh air, they are being careless, or they just don't expect to be shot at by arrows. This is the type of armor I am talking about for reference courtesy of Ian Laspina or his youtube channel name Knight Errant. 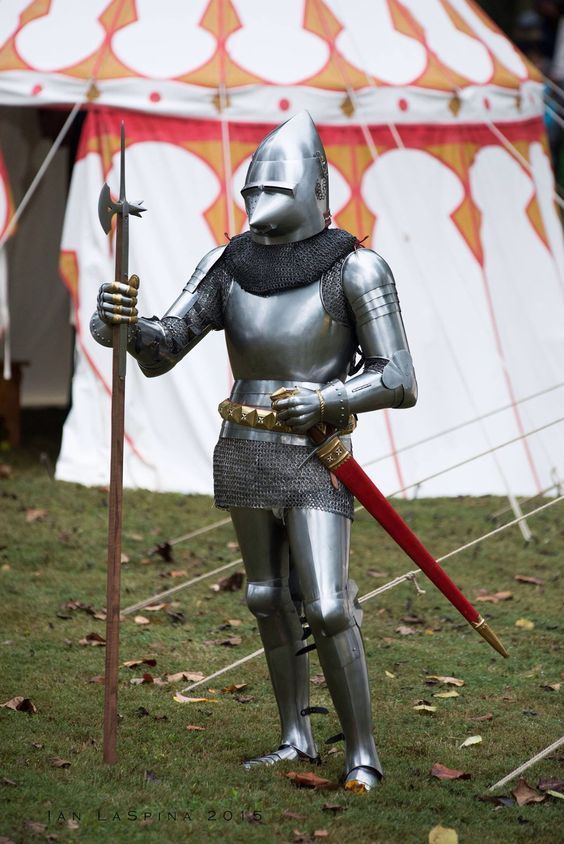 Of course, the situation does change dramatically when you have soldiers with mail armor and gambesons. An arrow would probably pierce such armor, but helmets and shields were still arrow proof so even the average soldier had options if he was under fire from arrows. We must also note that mail and gambeson would still do something against an arrow as these armors together which were commonplace by this period, were quite robust.   Still, a bodkin arrow would probably make it through.

A thing to keep in mind as well is to kill someone simply piercing the armor doesn't mean the person behind it is dead or even seriously injured either. The ability of for example your rib cage to protect you so long as you have armor along with it, and the arrow hits you just right even if it is basic armor shouldn't be underestimated. Even today we do know that bullets rarely instantly kill someone so it stands to reason that a projectile with less force wouldn't either unless perfectly aimed. Is this to say archers were not a threat to fully armored men? No, absolutely not. If you get enough archers firing at someone who is fully armored an arrow will eventually find a gap, and even if it doesn't having arrows fly at you is very unpleasant and will keep you bogged down and suppressed. This was really the goal of archers. They were looking to kill absolutely, but an arrow doesn't have to kill to do its job. The reason archers were so effective for example at Agincourt was their sheer numbers and the fact that the French were bogged down in mud allowing archers and men at arms to finish the fight in melee, and take so many prisoners. So if they had so many prisoners, clearly arrows didn't just mow them down as many people think.  Under ideal circumstances, archers simply get slaughtered by knights and men at arms.  This is because horses are tough animals that cannot be killed easily by arrows. We know this because horses have been recorded to take multiple gunshot wounds and still have the strength to gallop around. Additionally, plate is basically arrow proof, and horses gallop really fast. If the archers weren't fortified they were screwed without support. As for the lethality of the arrows in the game, it is fairly accurate.  We do see horses take arrows to the skull, and carry on galloping. This seems quite possible since they have hard skulls. Arrows also generally kill if you aim for the face and land a good shot if it is unprotected (though I had a few funny moments where this wasn't the case but they were exceptions to the norm). Additionally,  one or two archers in that game are an annoyance at best but if I had many many arrows flying at me they would be a threat for sure which I think is fairly accurate.

Next up is swords easily the most inconsistent weapons in the game. At the start of the game, I thought swords were depicted quite accurately despite the weird terminology used for certain combos which are not used at least for the specific moves in HEMA among other inaccuracies like matching guard positions (aside from the cutscene where the father seems to ignore armor with his sword but I gave that a pass as it was meant to be dramatic.). This is because I messed around a bit at the beginning and found that swords bounced off armor if I tried to cut a Cuman. They were also very nimble, and not cumbersome at all even in the hands of a total beginner which is also true. a longsword at its heaviest is only 2.0 kg. The thing is slashes even against basic mail armor or metal helmets are useless. In order to kill an armored opponent, you must get at the gaps. Additionally, stabbing through mail armor is possible but it isn't easy.

Swords are generally speaking secondary weapons partially because of this, and because polearms reigned supreme. There is a lack of polearms in the game but I am only talking about the effectiveness of weapons, and haven't experimented much with polearms so I won't talk about them much here other than to say that they are more effective than other weapons, but are also very incomplete.

Going back to the main topic of this section, swords do seem to become quite strong once you are skilled enough. So strong that I found that they are every bit as effective as maces at getting through armor. Sometimes with the headcracker perk, all it takes is one swing to a helmet and the guy is unconscious. To me then, there is no point in really using a mace because of the sword is more nimble as well. So they got these weapons quite wrong. Heres the deal about swords historically, it seems that fencing masters of the time did believe that specifically, a longsword was superior to a mace, or warhammer in most situations.  This is kind of interesting given how as shown earlier swords don't do much against armor. I think this means that maces and warhammers are a bit overrated.  Yes, you can kill someone if you bash their armor multiple times, but good armor encouraged such weapons to glance off more so it isn't as easy as you would think.  So really a thing to keep in mind is all of the main weapons in Kingdom come are secondary weapons. Really these small weapons aren't as effective as spears, glaves, halberds, poleaxes,  and bec de corbins at getting through or in the case of plate armor around the armor if thrusting.  Let's also note that we have techniques like half-swording, grappling and murderstrokes for dealing with armor as well if using longswords giving them more versatility over maces and warhammers. I think this is why they were considered the best secondary weapon of the time.  They are better against unarmored opponents being more nimble, they have more reach and leverage, and you still have options if you face a heavily armored foe.

So really the main thing they got wrong is just that melee weapons, in general, kill armored people too easily. I think the lethality of these weapons is accurately done against unarmored opponents with a few exceptions like thrusts not getting stuck. Though, despite all that I have said there is no question that a fight in full armor can last a long time if you are using swords.  This is an aspect that I did enjoy despite the percentage chance of ending it quickly with the headcracker perk. For the game, all of these mechanics and inaccuracies work very well, but from an accuracy point of view not perfect. There is a point where you become basically unkillable in a one on one fight, and you just attack and attack to win fights.

To end this off I am not faulting the game for the inaccuracies, it is a very fun game to play that depicts the effectiveness of weapons better than other games.   Frankly, the game wouldn't be fun if it was completely accurate but it is an interesting thing to take a look at. You can certainly tell that the developers at least tried, and did their homework.  I just wish poleaxes, and other true anti-armor pole weapons were more commonplace.

In this article, I mention murderstrokes, and half-swording. A quick guide to these techniques can be found below.

What do you need help with? This isn't the place to be asking questions but I will take a question. In the future please contact support.