Rate this article "Secrets of Grindea: "

Secrets of Grindea throws users back to the old days of pixelated 2D graphics, game cartridges. But lets be real here, if someone wanted to go play a game in that style they'd go back to one of the timeless classics right? Well Secrets of Grindea has a little special something that sets it apart from the games of the past. The crazy level of combat customization, the sheer amount of collectables, the engaging story, the online co-op and the chaotic boss fights make Secrets of Grindea a quality game of its own. Secrets of Grindea is still in beta, thus game has not been finished yet. However there is still plenty of content to satisfy the player.

A Demo is Available on Steam For Those Who Want to Try It!

I remember my first encounter with Secrets of Grindea was about 2 years ago. A couple of buddies of mine were trying to convince me to play this strange 2d pixelated game I'd never heard of before. I looked at screen shots and immediately shot them down. At first look it seemed like any other generic steam game, it wasn't even finished! And the thought of wasting my money on that seemed laughable. But a couple minutes later I got a message with some of the gameplay. My wallet was opened immediately. I grabbed my key, downloaded the game, created my character and joined two of my good buds in the world of Grindea.

The story begins as you wake in your bed. Your newly created character begins a conversation with your father and he reminds you of your life goal. In this world there are a number of collectors that hunt down monsters, and scour the world of Grindea for rare items. These rare items help with research and improve your own personal level of strength. Your father gives you an artifact in the form of a talking bottomless bag. And afterwards he encourages you to begin your journey, and attain the license to finally become a collector.
As you go on your journey you meet a number of hilarious characters that parody the traditional characters in the old Super Nintendo RPGs. The strange satirical story will get a chuckle out of most and yet it is still engaging and can be serious at times. However, this is not a finished game so I can really only judge based on what I've been presented with. But the decent chunk of story I was able to play through was incredibly captivating. Usually when I play with others we blaze through the dialogue and just start killing monsters. With this title we all enjoyed the light-hearted witty dialogue, but the combat definitely wasn't lacking at all. 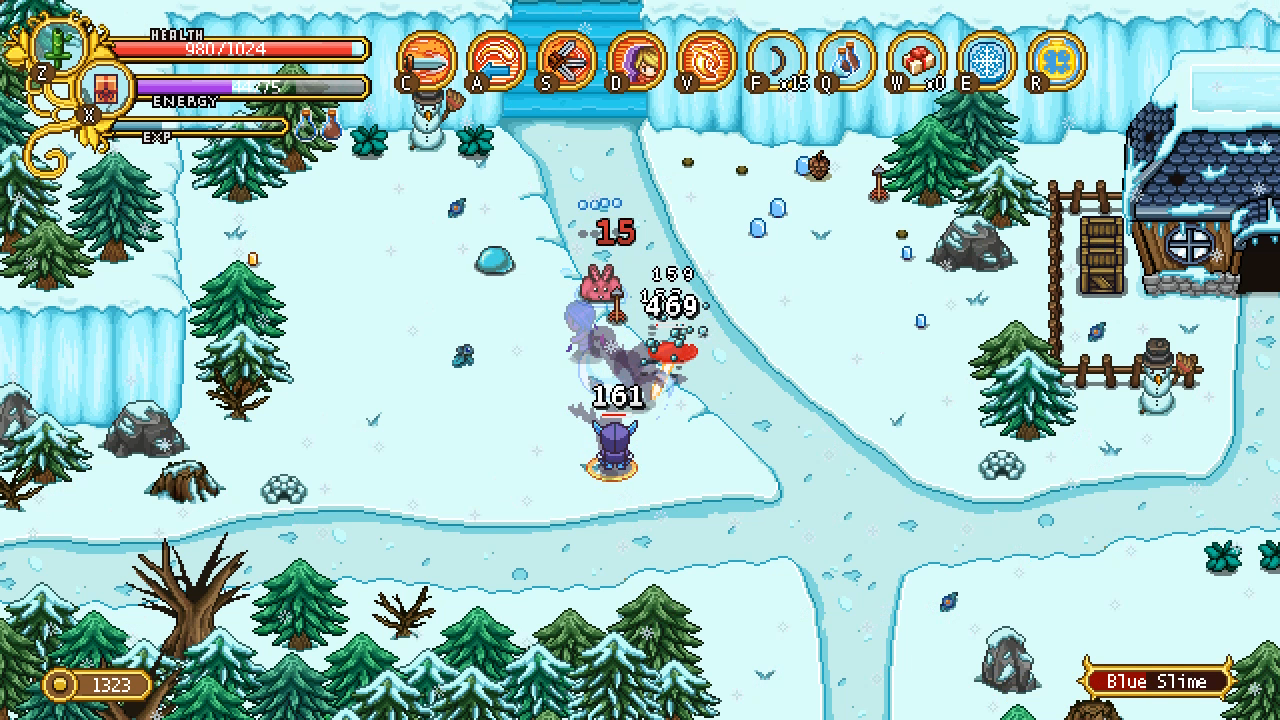 Combat
The combat in the game was the initial draw to the game for me. The game has a number of weapon types and a number of magic types. You can mix and match whatever you'd like, which makes it so nearly everyone's character is different. I'll put a brief description of your options

Melee
One Handed
The moves available with one handed melee weapons all are similar to an assassin archetype. The moves in this tree are all focused on ducking in and out while finding opportunities to do damage with a quick flurry of attacks. When using one handed weapons you can use shadow clones, back steps, flurries, and vorpal slashes. This is the class I used and I enjoyed the speed and dodging capabilities.

Two Handed
This is the great sword and hammer class. You find opportunities to bash your opponents face in. While you don't have the agility of the one handed class you far exceed its power. You must choose your moments to attack carefully.

Magic
You can focus completely on magic or just add some magic to your regular repertoire.
Earth, Air, Fire, and Ice are the four types at your disposal and you can choose to specialize or be a generalist in your magic.
Magic includes combat spells and summoning spells. Going with a pure magic build is a bit more difficult but it can be pulled off.
Some spells include chain lightning, earth spike, meteor, insect swarm, wind slash, and fireball.

Archery:
Archery is not something you exclusively specialize in, all characters can carry arrows and use them in addition to whatever the typically use. 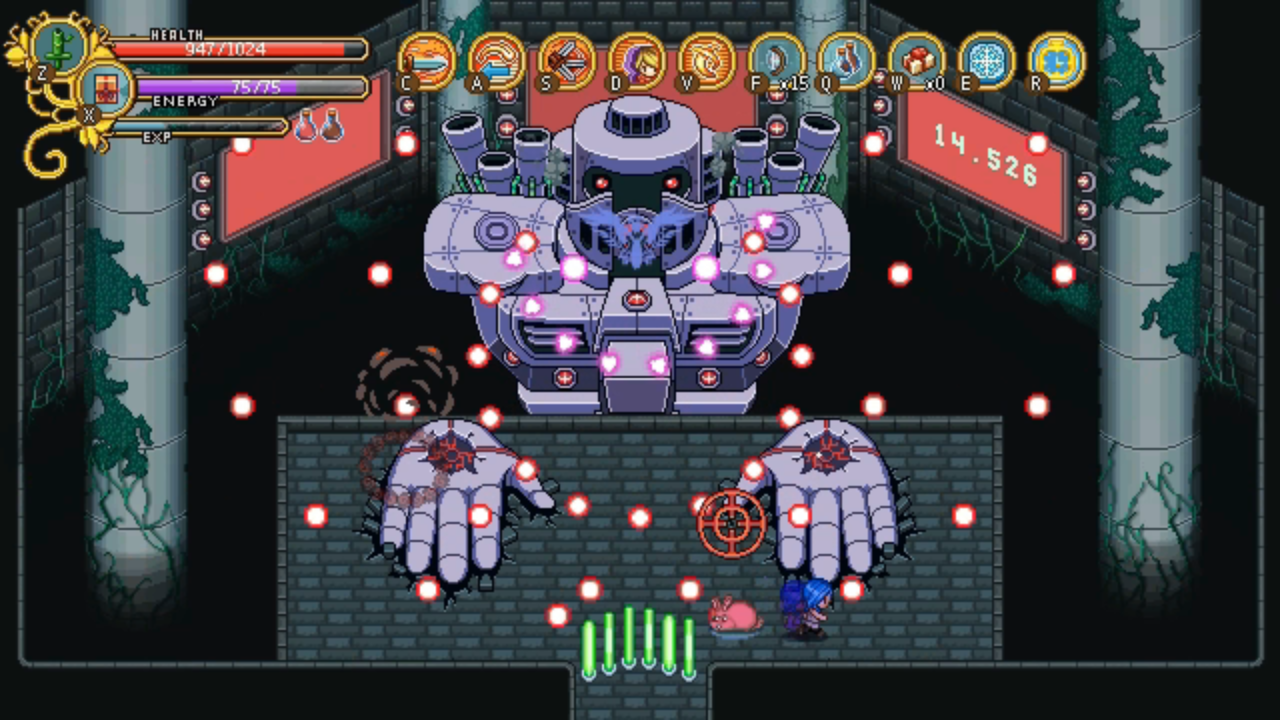 The boss fights are a bitter-sweet memory for me. I remember the frustration from dying over and over and the satisfaction after slamming that smug bosses corpse through a window. The challenge the bosses in Secrets of Grindea provided were entertaining to no end. The Touhouesque bosses have you running and weaving between hundreds of projectiles while you look for your opportunities to attack. The game starts you off with some rather easy scatter shots, and eventually has you on edge the entire boss fight making sure not to mess up.
Boss fights are not stat checks, unless you are severely over-leveled, the only way to beat bosses is to be good. In fact if you are under-leveled you can still defeat the bosses if you play well. Usually in combat you can depend on your shield to block attacks, in boss fights however your shield will be broken if you depend on it too much. When I played, I played on the hardest difficulty, if you aren't looking for a challenge and you just want to take it easy you can lower your difficulty to your liking. I do recommend that you play on the hardest difficulty, it is the most enjoyable experience if you are willing to die a few extra times.

Collectables/Sidequests:
Collectables are a huge part of Secrets of Grindea. After all, you are a collector. Here's a few things to look out for

Cards: Cards are a rare drop from any mob in the game. They are incredibly valuable because they add permanent stats to your character. The world isn't called Grindea for nothing, you will have to slay hundreds of every mobs to catch them all.

Gear: Gear can either be found, crafted or bought. For the good stuff, you need to farm for it.

Fish: Who doesn't love a good fishing minigame? This classic trope is brought back once again. Personally, I once again ignored it. I hate fishing in nearly every game.

When farming mobs their spawn numbers increase as you kill more and more of them without dying or leaving the area. As a result you will have very efficient farming, but it can get out of hand if you aren't strong enough for the area.

Side Quests:
What I miss about older games the most are those really cool missable side quests. There's a number of those within the game and as the developers continue working on the game more will be added. Each sidequest has its own little story-line. Oftentimes they are as charming as the main game and provide great loot as well. In one of them Santa Claus gets turned into 7 dwarf versions of Santa and you have to find all the Santas to make sure Christmas happens. Yes, you heard right,
YOU CAN SAVE CHRISTMAS! 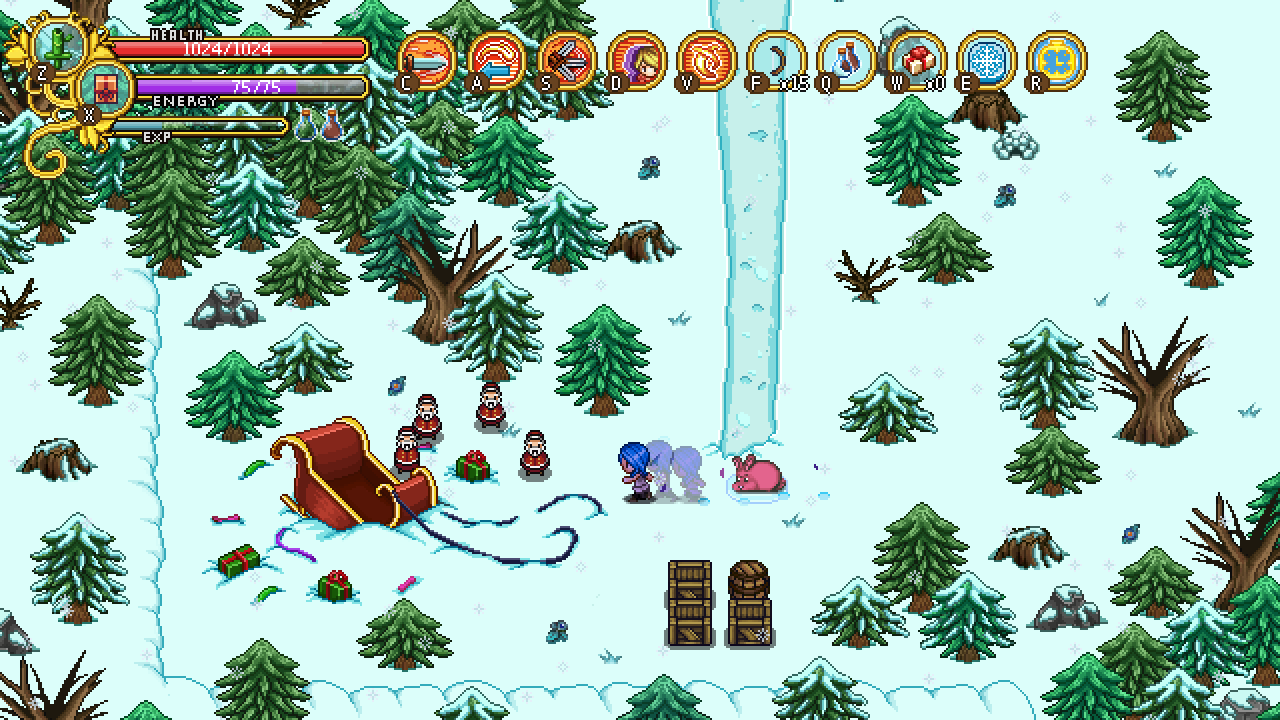 I really did like Secrets of Grindea, and I look forward to the completed game. It was a blast to play with others and it was entertaining to play alone as well. There is a pretty good chunk of content already out but the game isn't finished. I know many will dislike the idea of paying for an unfinished game. That mentality is very understandable and if that's the case perhaps you should wait a few more years for the game to be finished. But luckily you can still try out the demo so you at least know what you are waiting for.
For everyone else, I would recommend grabbing a few buddies and playing through Secrets of Grindea. Even if you have to play alone it is a good amount of fun. Even though Secrets of Grindea is not a graphical masterpiece it has an engaging and witty story, highly customizable and challenging combat, and a large amount of collectables and side content for those grind lords out there.
Since I greatly enjoyed the game I would recommend that at the very least you add it to your wish list to keep track of it. And if you enjoy the demo and can't wait, go ahead and buy the game. It'll give you a good amount of fun, and you get to support the small team of developers so that they can work on the game more.
Don't stop grinding,
Vaaren

Rate this article Secrets of Grindea: