Video games are not very durable. Having a graphic view, the gameplay elements that are 300 times overwhelmed by this game and the inability to run due to obsolete hardware that we no longer have are just some of the reasons. Nevertheless, despite all these drawbacks and obstacles, we often find ourselves playing old masterpieces with which we are grown and more than glittering, new titles.

One of the most spectacular examples of this phenomenon that people often return to is Another World, an action-adventure platformer has emerged back in 1991 for the Amiga and Atari ST. The game just released these days in the upgraded version of PlayStation 4, Xbox One, Wii U, PlayStation 3, PlayStation Vita, and 3DS, and we've downloaded the PlayStation 4 version to remind ourselves what the Another World has gained cult status and check how it was renewed for more modern times.


Lester Knight Chaykin is a young gifted physicist who is also the main protagonist of Another World. In the introductory scene with Ferrari (which is completely normal for one scientist) leads to his secret lab where he works on the accelerator of the particles and the theory of the creation of the universe. The problem arises when one of the experiments comes to lightning strikes, and our dear Lester's time-spatial projection is cast into another world. Soon we were detained by the dominant type of this unusual world, and the act began by running out of prison with one of the "domestic" prisoners. 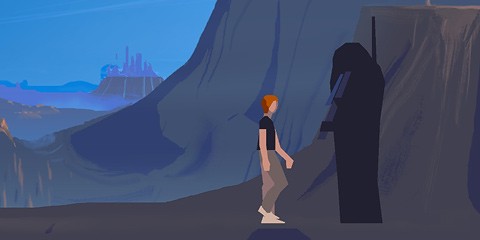 The action is told through short in-engine snippets that leave room for the player to interpret them, since Another World does not have any form of monologue or dialogue. However, you do not need to move too much about their interpretation - in spite of the simple but effective gesture graphics, the characters are, in most cases, very clear, almost in shaded cartoon films. This element, together with the absence of any form of help or tutorial, contributes to identifying with the main character - a lost and confused man struggling for his own life in an unusual place.

The whole thing played during the game comes down to the system of dying and repetition. Immediately on the first screen, the main character died because I was pointing to a little creature that looks like a worm. The problem is, of course, that they are a lot of deadly poison. The whole experience is best described as a scenario that needs to be played in the right order if we want to move forward. One wrong step in logic and we'll find it in the last saved place.

Luckily, the game automatically sets the position after each major share, and in this case it really confirms that we have done the previous part successfully.

A total of six keys will be used in your Lester adventure - four movement keys, action / run / shoot button and jump button. It is a little sad that creators have used three actions for just one button, as if there were not enough buttons on the controller. It is sad because it leads to confusing situations, such as shooting instead of swift running, which in such a merciless game results in frustrating loss of life. In addition to this lack, it should be mentioned that the game is strangely behaved when moving with analogue sticks so I recommend you to use d-drops on the controller. 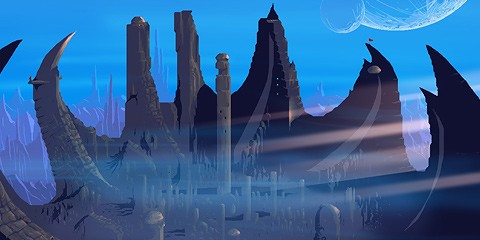 So this is a game about skillful platforming and solving spatial puzzles, but sometimes it is necessary to get the laser gun that Lester steals from the native at the beginning of the game and shoots to preserve the living head. Tapping with settlers is a fun planet, with interesting elements such as long-held firing keys to create a shield that will be used by opponents in greater quantities - all the firing elements are reduced to the clever use of the shield and the destruction of the opponent. They will be smartly set up, duplicate one shield and use the advantage of the terrain.

All this is done by interesting and beautifully designed landscapes, especially if you consider that the game for re-shooting has renewed its graphic side, but not so drastic that it disturbs its recognizable visual style. The PlayStation 4 version is rendered in WQXGA resolution (2,560 x 1,600), which is displayed at full HD resolution when viewed, thus achieving better anti-aliasing that creates finely torn polygonal objects. If one of you is a liar-loving lover, not to say pixel-like graphics of the original, you can switch to the original muted display that is more in the spirit of the 90s by pressing a single button. Similar to music, where we have the option of choosing the original soundtrack and the revised version. It seems that the team from Interplay Entertainment has been trying to reclaim and offered a game for retro-lovers as well as for new gamers who want a modern audiovisual display that is first encountered with Another World. 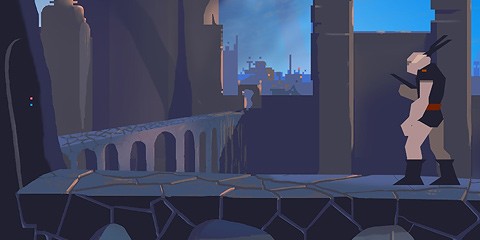 With confusing controls, the only real grievance that can currently be highlighted is only duration. For the first time you will need only two or three hours to transition, but this is primarily due to complex puzzles - if you go to another transition, you can comfortably go for an hour. Still, I doubt that somebody will decide to play the second time because after the first move, Another World does not offer us literally anything other than what we have already experienced. There are no alternate endings, thus trials or harder versions of the same levels. Anyway, maybe she'll be back for five years when you forget the details of the first move. Maybe until then a version with a 4K resolution arrives, and maybe by then we all end up on some other planet because of a major accident at CERN's great Hadron crash. Nobody knows, the future is uncertain, but in any case, the second move to Another World makes us wasteful of time.

Anyway, Another World - 20th Anniversary Edition is an unusual gaming experience. An unusual way of telling an action, interesting gameplay elements for a 20-year-old game, linking to the main character through feelings of discomfort, fear and confusion and the collage of graphics make an excellent combination that will keep you constantly injected into that other world. Unfortunately, this feeling will keep you relatively short - for a game that costs $ 60 on PlayStation Store this is still too small. But despite the price and duration ratio, I still think that Another World is an inevitable part of the gaming culture that should be visited by all players who value a good atmosphere and intelligent design.