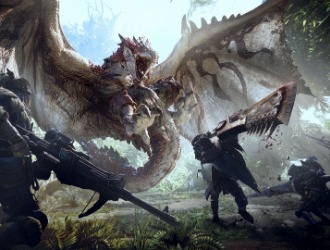 Monster Hunter: World is the next part of the series which has been breaking world records since the early 2000s. There have been already dozens of Monster Hunter games released over the years. This is an RPG game from the Capcom company, which from the very beginning of the series could be played on PlayStation and Nintendo consoles. For many years the series was enjoying popularity mostly in Japan. Monster Hunter: World debuted simultaneously in Japan and the Western countries. It was accepted with the same recognition by many countries at the same time. An interesting fact is that firstly the game could be played only on the PlayStation 4 and Xbox One consoles. Then after a few months it was released for PC. The universe of Monster Hunter is set in a fantasy world, inhabited by people and monsters of all kinds. As the name of the series suggests, during the game we play the role of a hunter whose task is to hunt monsters. The concept of the game is the same almost from the beginning of the series. The story line does not play a main role in Monster Hunter: World. The most important thing here is the gameplay, the ability to explore the expanded world, building the skills of your character, the variety of monster - enemies, as well as a plurality of possibilities for their elimination. In the game, we can travel the open world - both on foot and riding one of the previously tamed monsters. Another extra flavor is added to the game by the changing times of the day and weather conditions. The player also has dozens of the most diverse weapons and armor, from single-handed swords and shields, through two-handed swords, battle hammers, bows, crossbows, spears and lances. Each character in Monster Hunter: World has individual characteristics - strengths and weaknesses, which makes the game more attractive and makes it necessary to carefully observe the battlefield with each opponent. The world in the game was created as a living ecosystem which allows you to observe different situations or find hiding places, so you can observe fighting monsters. If you want to experience the unique style of Monster Hunter: World or you want to dive in a world which you know and love from previous parts of the game, you can play Monster Hunter: World today by exchanging Soul Gems for a free Steam game.