Get Far Cry 5 absolutely for free!

Far Cry 5 is an action game FFP which is another with a multiplayer shooter released by Ubisoft. In this part of the series, however, we are not moving to exotic places like in Far Cry 3 or Far Cry 4, but to a sandbox world created in the American state of Montana. 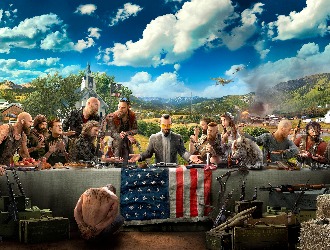 Far Cry 5 is the fifth edition of the cult series of FPS action games, published by Ubisoft.

In Montana, religious fanatics have ruthless governments. In the fictional county of Hope, the group headed by cruel Joseph Seed, spread terror.

Players start the game by creating a character - a policeman who will have to deal with the cult.

The core of the game is exploration, performing missions and fighting opponents. Our hero does not fight alone, during the game the allies join us (barmaid Mary May Fairgrave, pilot Nick Rye, pastor Jerome Jeffries or Hurk Drubman).

We gain the loyalty of our allies for carrying out the tasks entrusted to us.

If this is not enough for us, we can also finish the campaign with another player.

It is not a big surprise that the PC version graphically outperforms the versions adapted for consoles. All, however, are developed with great care. The creators gave away the climate of the American province focusing on the details of the surroundings.

Get now the key to Far Cry 5 for absolutely free, or check the previous versions of the game available in our store: Far Cry 3 and Far Cry 4.