Rate this article "Firewatch - As Good As The Movie?"

Firewatch - As Good As The Movie?

The Firewatch trailers enticed the fantastic beauty of the scenery and hinted at some kind of creepy mystery hidden in the forests of Wyoming. The forester wandered among the trees and rocks, and stranger things were happening around. Something was present in the spirit of Alan Wake and the novels of Stephen King - calm, suddenly replaced by enveloping horror and irrepressible feeling of anxiety. But we were cleverly deceived. 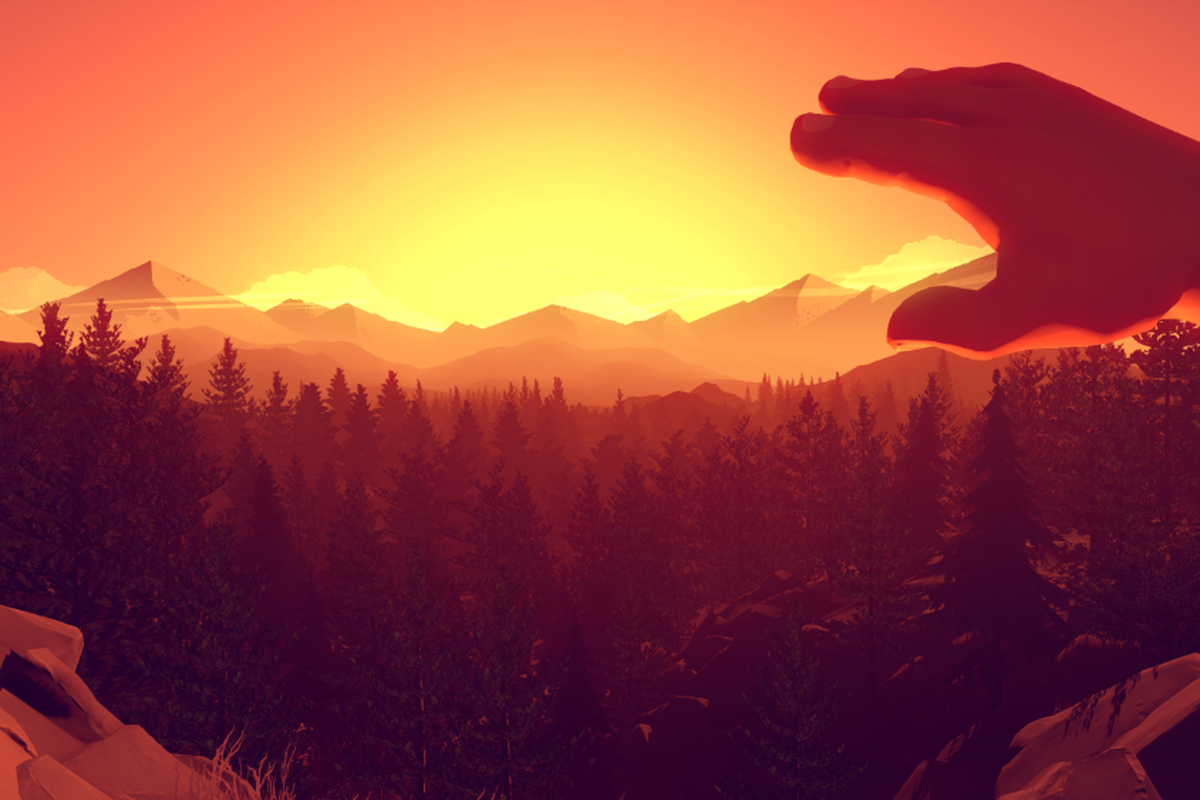 Henry, the protagonist of Firewatch, is by no means a big nature lover, as you might think. Sitting down all day in a fire tower located inside a deep forest is his way of escaping the oppressive problems in his personal life.
However - do not rush to conclusions. It is not at all about the classical turmoil, like misunderstanding or cheating. Henry's wife suffers from progressive dementia. She is a little over 40, but no longer recognizes her own husband and needs constant medical care. What to do about the disease, Henry has no clue. All he can do is hide - seeking peace and trying to get his thoughts in order. 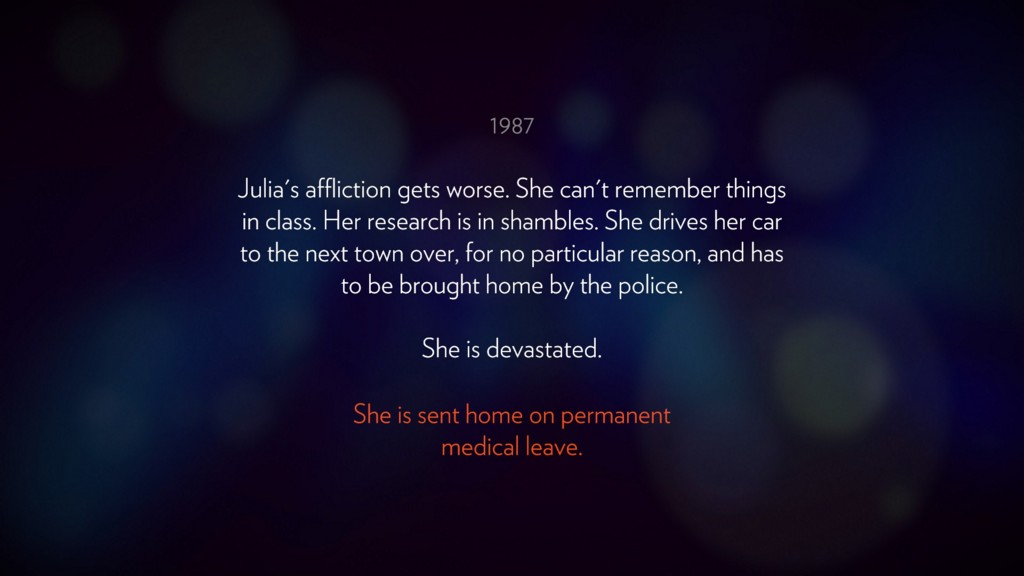 Henry's past is an important part of the story. It is with his help that Firewatch sets up the necessary atmosphere and helps to identify oneself with the hero. The player sometimes has to read small essays describing episodes from the life of Henry, and from time to time make minor decisions which will decide which of the two endings you get.

Short, unfinished phrases draw vivid visions in the head. Henry awkwardly flirts with his future wife. There they are with her choosing a dog. Here we dream about children. But the first "episode" is hinting at a terrible diagnosis. The essays are becoming more disturbing, and the sense of despair is becoming more apparent with each note. 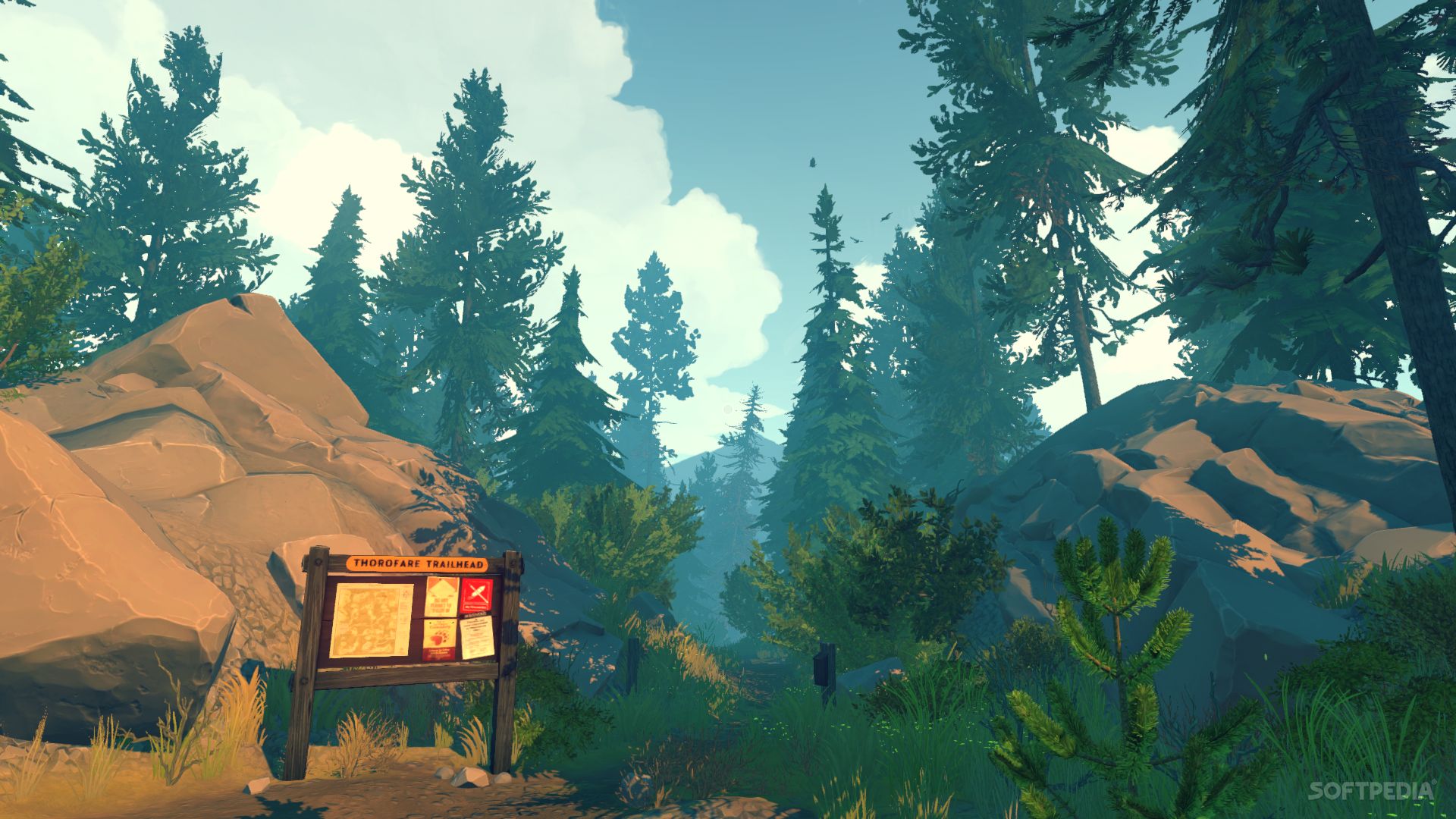 The girl looks after another sector of the forest, and at the same time for the hero who is inexperienced in the new profession. She jokes a lot, gently mocks Henry and is very friendly. However, from the first minutes it becomes clear that for her humor is a protective barrier, behind which there are no less hidden experiences than Henry himself. Perhaps this is what brings them together?

Under the guidance of Delilah, we begin our duties. We wander through the forest, shoo away teenagers with beer and fireworks and just chat with people. Almost any event, any subject can be discussed by radio. Over the fascinating chatter "about anything" conversations are becoming more and more personal. Delilah is increasingly revealed to us, and we are introduced to her. There are no empty remarks here, each word reveals the protagonists' characters bit by bit. After a couple of hours, the brain refuses to perceive the voice coming from the radio as a pre-recorded set of replicas. On the other end of the radio is a living person. It cannot be otherwise. 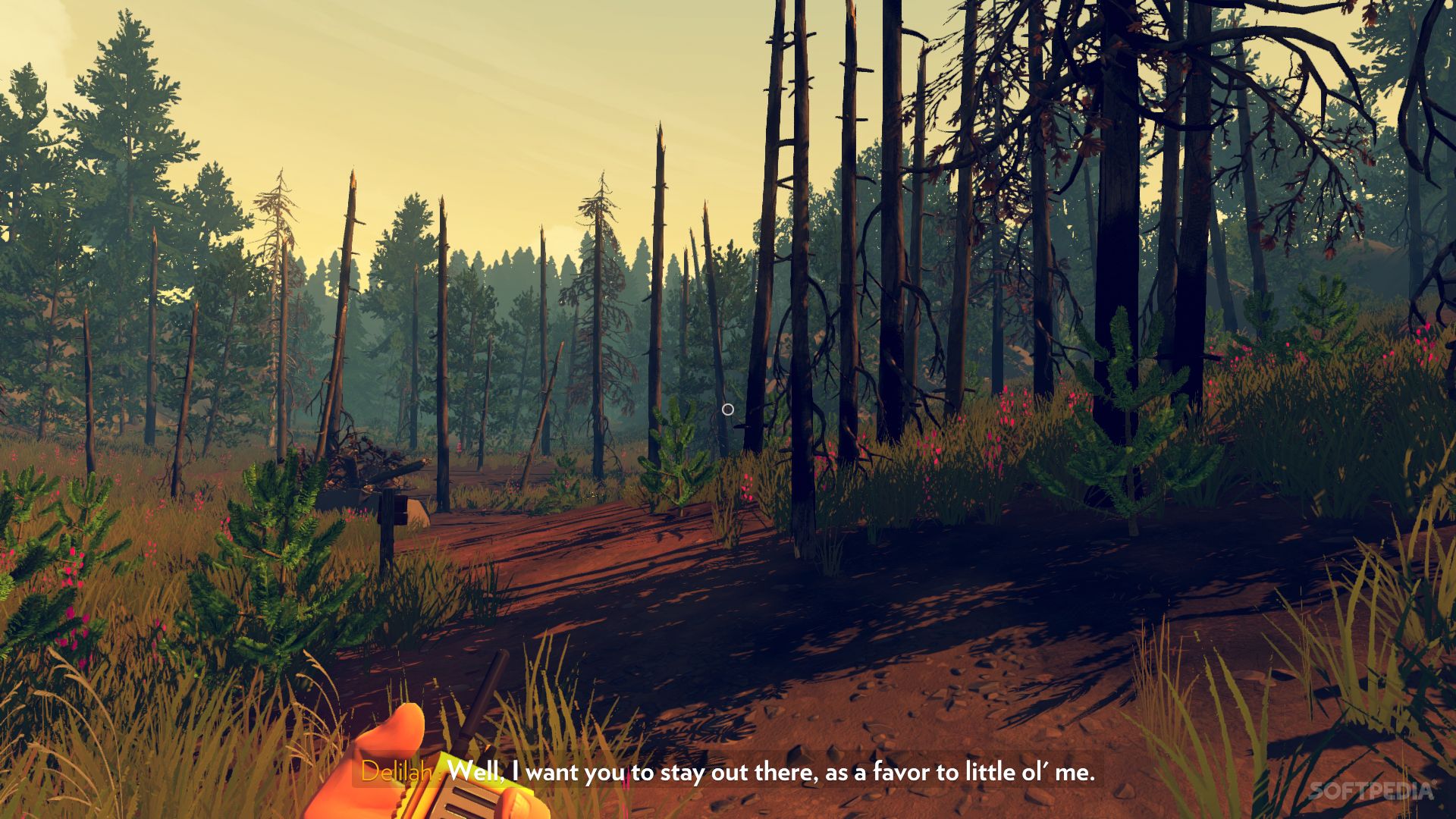 The area of forest entrusted to us is quite large and fully open. At first, it’s not very easy to navigate, but after a couple of hours, all the trails and edges are like relatives.

The map is big and open, the scenery and the graphics are gorgeous. It is very fun exploring the map and finding new people, talking to them, then walking again. The entire game is narrative based. The story is based on chatting. While Firewatch might not be the most action filled, it's intrusive and captivating, based off of characters which the player pictures himself with the decisions made while advancing through the story, similar to Life Is Strange. The story itself is a little lackluster and could be not as drawn out, but it's not all bad. 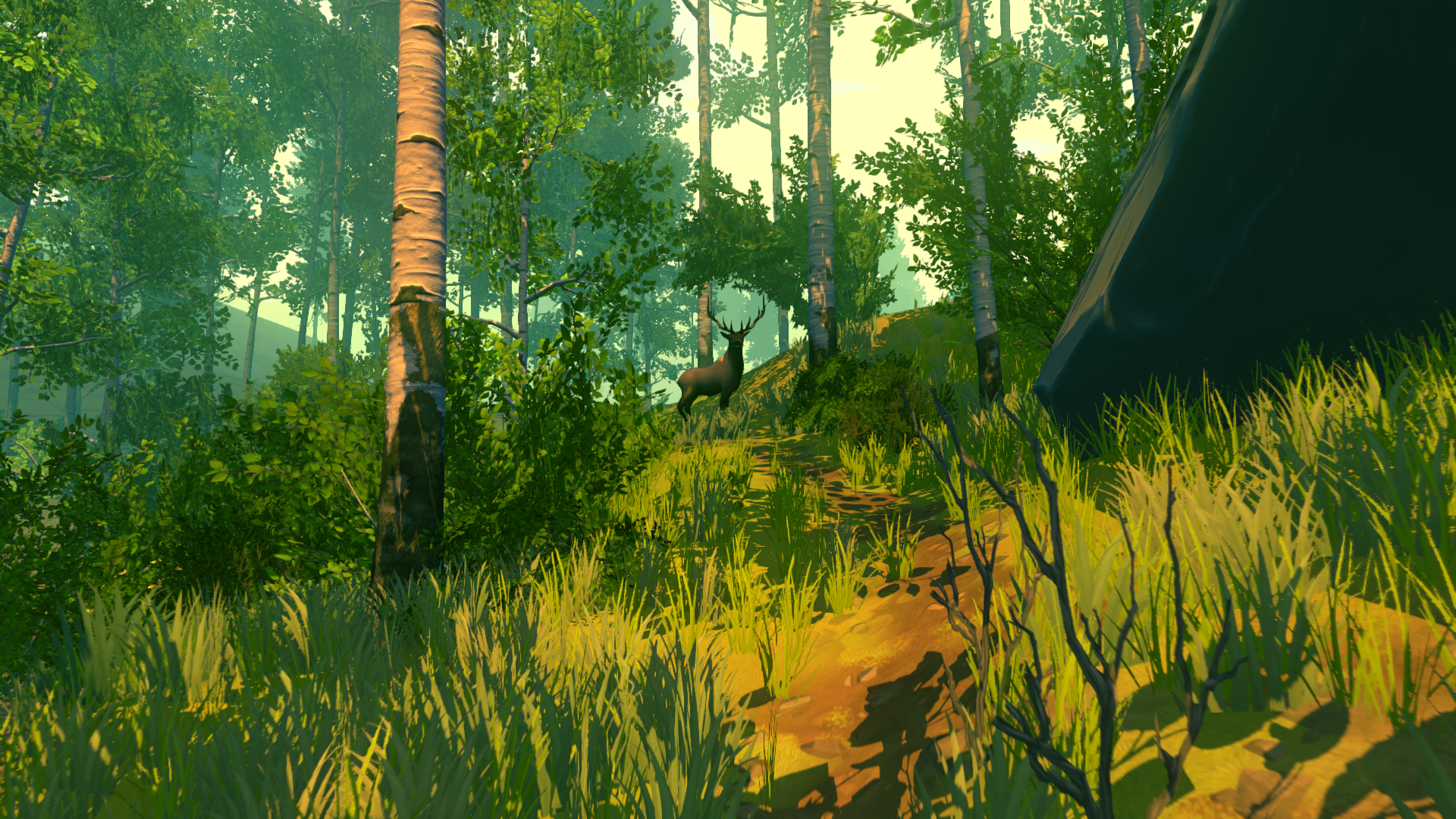 Firewatch caresses hearing, scenery, and the atmosphere.. All I want is to just get lost in the forests, performing their duties of a forester. No puzzles, challenges and difficulties in general - wander and contemplate. It will definitely turn off many: Campo Santo's single-player title doesn’t do much to give you the ability to play. Looking around, listening, to some extent even playing a role in the dialogues with Delilah - this is the core of the game. But whatever you do, you will reach the ending. Soon enough.

The game is great in many ways, including the ending. Of course, Firewatch is not as impressive to everyone. Some don't care about the beauty of the forest, others might not like talking to people, but those who do will find it supreme.

Verdict: hugely recommended, but just for the right person.
The game costs 4.99€ on Steam as it is currently on sale. The 75% off offer will end on 11th of February, so i you're willing to give it a try (which I highly recommend), buy it now.

Rate this article Firewatch - As Good As The Movie?

The vectors and infographic style are so underrated.

I've never known that there was a movie on the same topic as this game.

scenario is good, voice acting is awesome but... where are the gameplay? Aw maan :(

I love the story , is so nice and calming

oh this game was amazing really enjoyed it

Yup I played this game and It's really cool