Kaos Studios was an American video games creating studio located in New York. Kaos Studios was founded in 2006 when the THQ hired the main members of Trauma Studios (the team responsible for the popular modification of Desert Combat for Battlefield 1942) to create a new studio focused on computer games. Thanks to this, Homefront was created.

Join the resistance movement, stand together in the fight for America's freedom. Fight against the overwhelming military force in the thrilling single-player campaign, written by John Milius. Stand next to the cast of unforgettable characters, in this terrifyingly realistic world of the near future. Experience the real action from a first-person perspective. Use partisan tactics, command military vehicles and advanced drones to defeat the enemy! 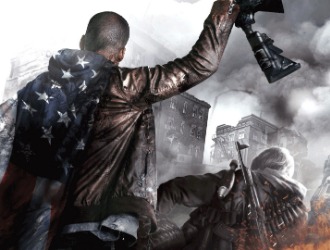 Homefront is a first person perspective video game developed by Kaos Studios and published by THQ. Homefront was released on Windows PC, PlayStation 3 and Xbox 360 in 2011. After THQ's bankruptcy, the rights to the game were sold to Crytek.

It is 2027. The world, as we know it, is falling apart after fifteen years of economic breakdown and global conflict over shrinking of natural resources. Once proud America fell apart, its infrastructure collapsed, and military forces are in disarray. Damaged by the devastating EMP attack, the US is unable to ward off the ever-growing strength of the Republic of Korea which is armed with nuclear missiles. .

Exchange your Soul Gems for Homefront and fight for US freedom right now.