Kingdom Come: Deliverance is a sandbox RPG embedded in medieval realities. The game on many levels resembles such best-selling productions as The Elder Scrolls V: Skyrim, Dark Souls or The Witcher. 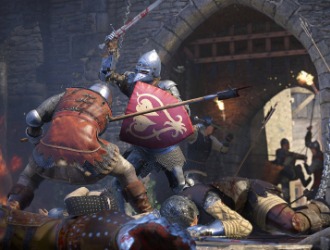 Get a free key to Kingdom Come: Deliverance, embedded in the Hussite Wars RPG presented from a first-person perspective.

The plot of the game takes place in the realities of medieval Europe, we begin our adventure in 1403, a dozen or so years before the outbreak of the Hussite wars. As a young Henry, son of a blacksmith, we swear vengeance to a cruel invader who killed everyone from our village. Entangled in a series of political intrigues, we are ultimately confronted with the task of restoring Kingdom order and giving power to the rightful heir to the throne.

While performing our mission, we will be going through a vast sandbox world encountering both enemies and friends. Unlike other games of this type, in Kingdom Come: Deliverance completely abandoned the fantasy elements and entirely put on the historical medieval realities. Also, combat mechanics is based on the principles of medieval fencing, which creates a kind of new, extremely realistic quality.

Elements of clothing and equipment have been faithfully rendered, and Henry as the son of a blacksmith can produce some of them himself, which adds to the game additional elements of crafting.

Despite the low budget, the game represents high-quality graphics and sound settings, and the world created by the developers looks very authentic.

Feel the atmosphere of the Middle Ages and play Kingdom Come: Deliverance for free!