Get Brutal Legend absolutely for free!

Brutal Legend is TPS embedded in the dark fantasy world, combining elements of RTS and action games. The game is enriched by a sensational soundtrack made up of the most popular heavy metal tracks. It's also full of black humour and pop culture references. Do not wait, play now Brutal Legends for free! 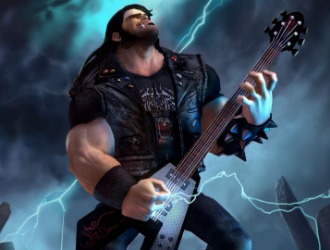 Brutal Legend is a third-person perspective RTS, in which we play the role of Eddie Riggs, a technical supporter of heavy metal concerts. Wiring issues or proper sound system settings are simple for him, but his guitar skills leave a lot to be desired. Riggs plays in the band, but a staggering career is unlikely for him.

Everything changes when one day a few drops of blood fall on the hero's buckle. His belt turns out to be a demon's habitat. Freeing himself, the monster decides to return to his world. The dark world from which heavy metal comes. He takes Riggs with him. The land, abandoned by the gods, awaits a saviour who will release it from the yoke of cruel demons. Equipped with a huge axe and guitar, Eddie must now prove that he deserves to be called a real god of metal.

Get a free key to the game Brutal Legend and defeat the terrifying monsters on your way. In the single-player campaign, we use combat skills of the main character, but we can also drive vehicles, looking like the cars we know from postapo, or float on membranous, demonic wings. As a god of metal, we also assemble our own army, consisting of hordes of demons with different fighting skills, which will help us regain control over the dark world of the game. It depends on us how we manage our monsters and what will be the results of our struggles. One of the ways to defeat opponents is, of course, playing the guitar, allowing you to deal with the entire enemy troops.

Considering that metal music is one of the ways of fighting in Brutal Legend, one can not be surprised by the choice of soundtrack songs. Play for free at the Brutal Legend and listen to the popular songs of Black Sabbath, Candlemass, KISS and Judas Preist. In the game, you will also find a huge dose of black humour and references to metal musicians. The voice for the main character lent to the leader of Tenacious D, and comedy actor, Jack Black.

Apart from the solo mode, the game also offers multiplayer, in which we use the skills acquired during a one-person campaign. It combines elements characteristic of RTS and action games and allows you to build an army, take over resources and fight together against enemies.

Grab your free key to the game Brutal Legend now and become a real god of metal!