Get Book of Demons absolutely for free!

Book of Demons is a classic hack'n'slash with elements of card games and role-playing games. The title is to be a tribute to the classics of the genre, so it is not surprising that there are clear references to, among others, the iconic Diablo series. 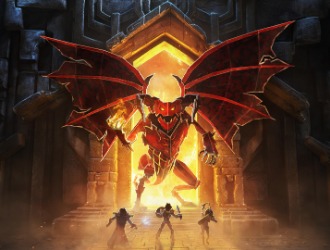 Book of Demons for free!

Get a free key to Book of Demons, a fantasy hack'n'slash game with elements of card game and RPG. The independent Thing Trunk studio is responsible for its creation. The production is to be the first in a series Return 2 Games that is a tribute to the best games of the last decade of the twentieth century.

The plot of the game combines two popular threads — the fight between good and evil and the motive of the chosen one, which is to save the world from destruction. During the game, we traverse the dark catacombs, constantly heading for the habitat of evil, until the fight with the main boss. We complete a number of role-playing tasks on our way. In the intervals between them, we get to our city starting point.

The development of the hero is possible thanks to various cards that we collect during the game. They are responsible for all kinds of skills useful when fighting demons. We can prepare a deck for our character each time before the mission begins. Preparing the right deck is important because it allows us to prepare for the most diverse attacks of opponents.

Book of Demons allows us to become a warrior, thief or magician. The hero class apart from the skills also determines the type of equipment we can use.

Do not wait, grab the key to the game Book of Demons for free and become a hero fighting against the hordes of demons!