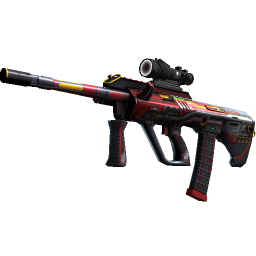 The latest version of the series - Counter-Strike: Global Offensive significantly contributed to the development of modern e-sport. One of the most recognizable rifles in the world is the AUG. It is a semi-automatic rifle, which was designed by the Austrian Steyr-Daimler-Puch company. It has a bullpup construction with a futuristic appearance (this means that the whole chamber is located behind the trigger). The weapon was covered with hydrographic in the form of Syd Mead’s artworks. Exchange your Soul Gems for an AUG Syd Mead! The AUG is a rifle, designed to be used in close quarter combat. It has a bullpup design, which allows for a longer barrel, while keeping the weapon's overall length shorter than most assault rifles. The AUG is equipped with an advanced scope that allows the user to see through smoke and darkness. Exchange your Soul Gems for the AUG | Syd Mead!