Minecraft is often described as "Digital Lego", but the actual game has more complex mechanics than just building and mining, It also has combat, and a clear objective on how you can finish the game. It is a block-based building game, where you play as Steve or Alex, and you must survive the night against the unknown, dangerous creatures of the night. Many players often play the game in creative mode to build their favorite houses and to make something new, like a rollercoaster or a computer.
Some determined players even made other games in minecraft by using commands. Which is easier said than done to be honest.


1.15: The Buzzy Bees Update
Prior to Minecraft's 10th anniversary, they released a snapshot where they introduced bees into survival mode, as well as creative mode.
New to this update is a new mob, which is the Bee. I think these creatures look cute, aren't they? 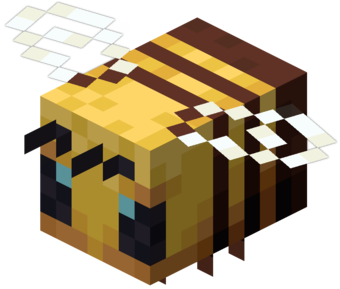 New blocks were added too, Including Naturally spawning Bee Nest Blocks, as well as craftable blocks which are Bee Nests and the Honey Block.
Overall the update released only a few features, like extra commands for those creative players, as well as new advancements, but the Minecraft's Fanbase can tell that the developers are up to something big.

1.16 Update: The Nether Update (Ongoing)
This update was recently announced a few months ago, during Minecon Live, which they announce all things minecraft, I waited for months for this update to roll out and the Update was finally released recently.

Now, I played this update recently and explored some brand new stuff, Including a totally revamped Nether, You may think that it's cool, but the cooler part is the new biomes! Which are listed in order: 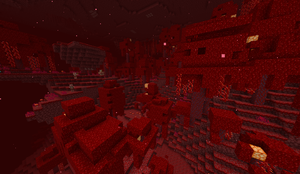 This was the first Biome that I have stumbled into, what surprised me is that they actually made new types of trees in this biome, with corresponding different types of wood too! I also saw a new type of Zombie Pigman in this biome, which is called a Hoglin, which look much more fitting in the nether than the previous Zombie Pigman, this biome has also a specific atmosphere, the sky is suddenly filled with crimson red fog, which adds the immersion to this biome. 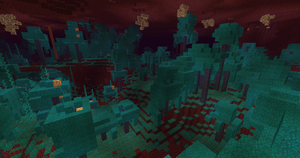 This biome really gives Nether some sort of life to it, metaphorically of course. Because I'm used to the Nether being red and orange all of the time, and not seeing enough green, well.. This update really changed everything, when I checked the change log, I thought it was another "small update" well it's not.
This biome also has a different type of tree, which is a Warped Root. And it can be turned into warped planks. I also saw some endermen in this biome, which is really weird, because I only see them in the Overworld or in The End. 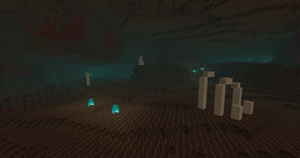 This biome is kinda hard to find, for me at least, but the trip was kinda worth it, just to see and explore brand new stuff. This biome features randomly spawning fossils, which is probably previous entities who lived?

Anyways, this biome is just as surprising as the last, there are new types of flames that spawn here, which is colored blue, but you should also be careful, I almost died to a Ghast in these lands,  because there are so much soul sand, as well as new types of soul sand, which is soul soil. There are also alot of skeletons here so when you are trekking through the Nether, Don't forget to bring a few Fire resistance potions, as well as diamond armor and tools.


4. Netherite, The new ore to rule them all 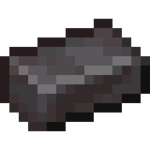 Do you remember me saying to bring Diamond Tools? Yeah, there is a reason to bring those to the nether, because there is a new ore added to minecraft, well... You need gold bars and some netherite scraps to craft an ore. You may ask: where do I get those scraps?  Well.. You need to smelt Ancient Debris to get it, which is a rare, randomly generated block in the Nether, It can be at the bottom of a lava lake, or at near the bedrock roof, which is hard to do.

But don't worry! you only need to get an unused, diamond pickaxe, and to add a netherite ingot into the crafting table to get a netherite version of that tool.

a. Basalt -  A naturally spawning block which is used for decoration purposes, can be made when lava touches blue ice, over soul soil. Or can be found in randomly generated pillars which can be found in any biome.

b. Blackstone - A dark colored, naturally generated block which spawns anywhere in the nether in any biome in the nether, used for decorative purposes.

c. Block of Netherite - Can be crafted by combining 9 netherite ingots in a crafting table, can be used as a beacon base, this item has weird properties, It cannot burn in lava, rather float on it. and It cannot be de-spawned by exploding tnt.

d. Crimson and Warped Planks - can be crafted by putting one warped stem or crimson hyphae, which can be used as a decorative material and building material for houses.

e. Crying Obsidian - Is obtained by bartering with piglins in the Nether, and is used to craft a Respawn Anchor, an alternative to Beds in the Nether, which usually causes the bed to explode.

f. Lodestone - Is a craftable block that is used to alter a point after right clicking it with a compass, which can be used as a waypoint, which can be helpful if you are lost, and It works in any dimension, Including the Overworld and the End.

g. Respawn Anchor - Can be crafted using 6 crying obsidian and 3 Glowstone Blocks, which can be used as an alternative to beds, but has a limited amount of uses and can be recharged by Right Clicking the Block with Glowstone.

h. Target - A craftable block that can output a redstone output when shot with a bow and arrow.

Overall I'll give this update a 9/10, Expect to have alot more additions, and maybe I'll write another article when new stuff is added :D

i love it so much

This update makes minecraft much more interesting and grindy, because I'd have to spend hours mining for netherite

minecraft is a great game!

I cannot imagine myself playing this game ! I am really curious why people like this game. What I like about it is how creative players are. I admire their work when I watch videos about it with my little brother.