Attack on Titan 2 Review and Comparison 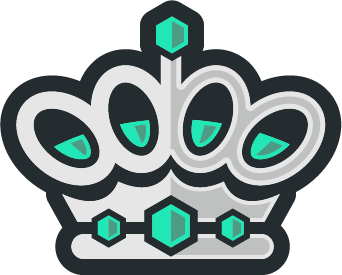 In 2016, Koei Tecmo made Attack on Titan: Wings of Freedom, a hack and slash action game based on the titular series. In 2018 they continued with Attack on Titan 2, which in my opinion is a clear improvement over its predecessor. Here are my thoughts about the game, and how it compares to the older one.

What would it be like to witness the brutal events of Attack on Titan first hand? Instead of controlling the characters of the story, you'll create your very own character and play through the story as him/her, as a bystander, but a noticeable one nonetheless, through the events of the first two seasons of the anime. This is your own story.

You spent your childhood living in the Shiganshina District just like Eren and friends, until the fateful day when Wall Maria fell. What's worse, you witnessed your parents being crushed before your eyes by a boulder sent flying when the Armored Titan broke through. By chance, when you're taken to safety, you happen to be on the same barge as Eren, Mikasa and Armin. When Eren cries his anger-filled vow to wipe the Titans from the face of the earth, his words strike deep within you, filling you with a similar craving for vengeance. You decide to join the Scout Regiment to help humanity in it's battle, but especially to get payback on the Armored Titan. 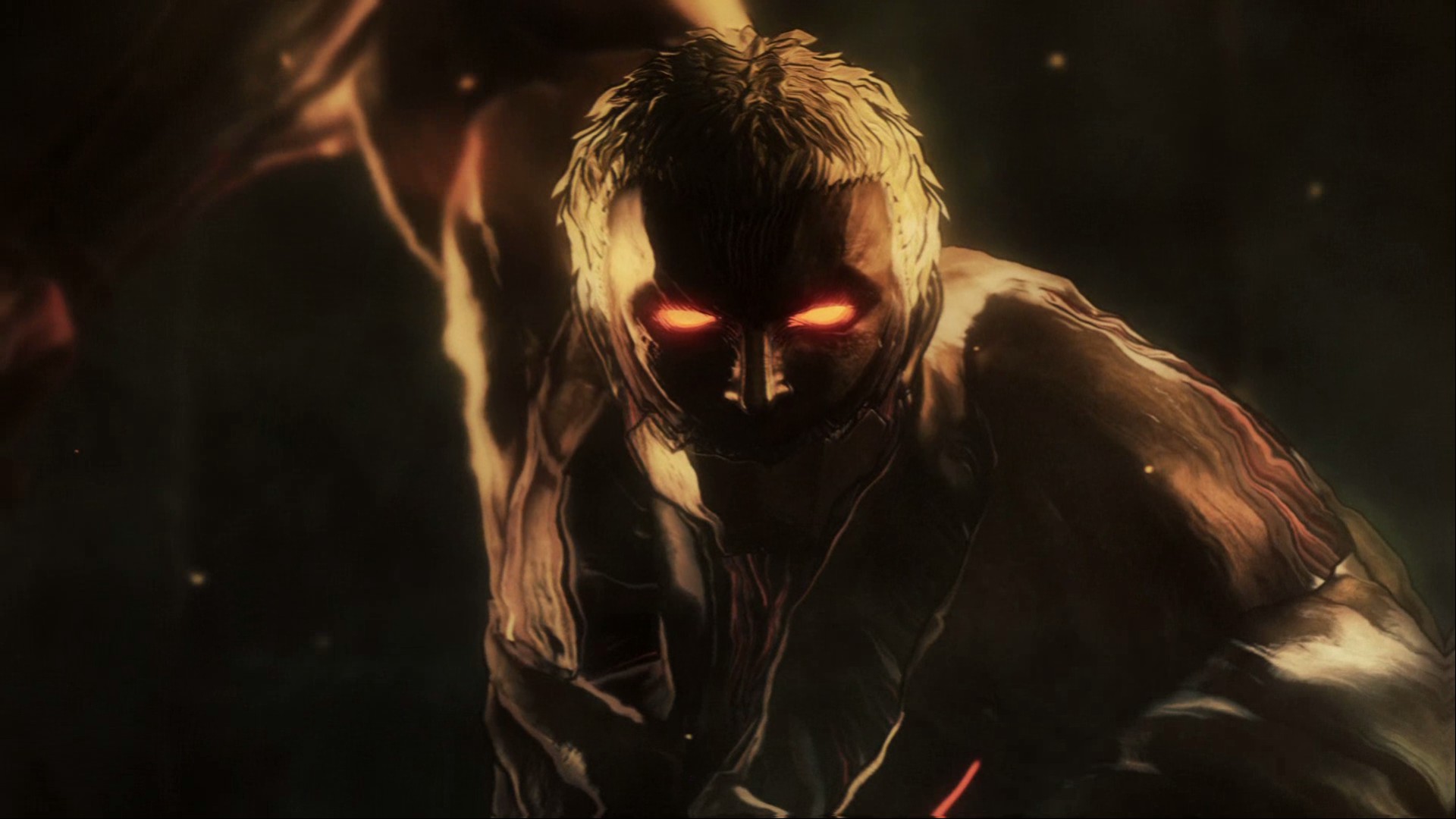 Forget the Colossal Titan, HE's the one you want!

The basic premise of the battlefield remains the same as in the previous game. You move around either with the ODM gear or on horseback, fighting Titans and trying to help your comrades in peril, while keeping an eye on your blades and gas. Cutting off the arms and the legs of the Titans will make them easier to defeat, plus it will provide you with some materials. But there are several changes.

Building bases is a new mechanic. Whenever you complete a side mission, you're rewarded with construction signals, which you can spend to construct various bases at specified locations. There are several types: mining bases increase the number of metals you receive after the battle, which can be used to improve your equipment, frontline bases increase the damage you and allied soldiers do, bomb bases explode when attacked by Titans, making them useful if you're surrounded, etc. Old mechanics have also been improved. As before, you can invite up to four characters to join you on the battlefield, but now they have unique abilities. For example, Ymir and Jean carry flash bang grenades to blind Titans, Hange and Moblit carry net guns to capture Titans and Levi has a devastating combination attack that deals massive damage and is usually enough to take your average Titan out with a single strike. Also, if a Titan manages to grab you and any of your allies has his buddy action ready, you can call him to save you. Should you manage to get behind a Titan without being noticed, you can take aim with a scope and perform a sneak attack. This consumes a lot of gas and you have to time your strike correctly, but when successful, it's often all you need to bring theTitan down. There are also several new items, such as the forementioned net gun which you can use to capture Titans provided you ahve sliced off their legs first. Capturing Titans gives you a lot of regimental funds, but also increases the level of Titan Research Room, which unlocks new items for use. Finally, even the Titans themselves have clearly been updated. If you circle around them with the ODM gear, they will attempt to move their hands in the direction you're heading, grabbing you, if you're careless. They also have a higher tendency to jump up, which means they can snatch you even if you're behind them. If you stay in a Titan's field of vision for too long, he will enter a rage mode, where he'll move faster, be more aggressive, and focus his attention exclusively on you. The duration of the rage mode decreases, if you manage to slice off his body parts or blind him with a flash bang. 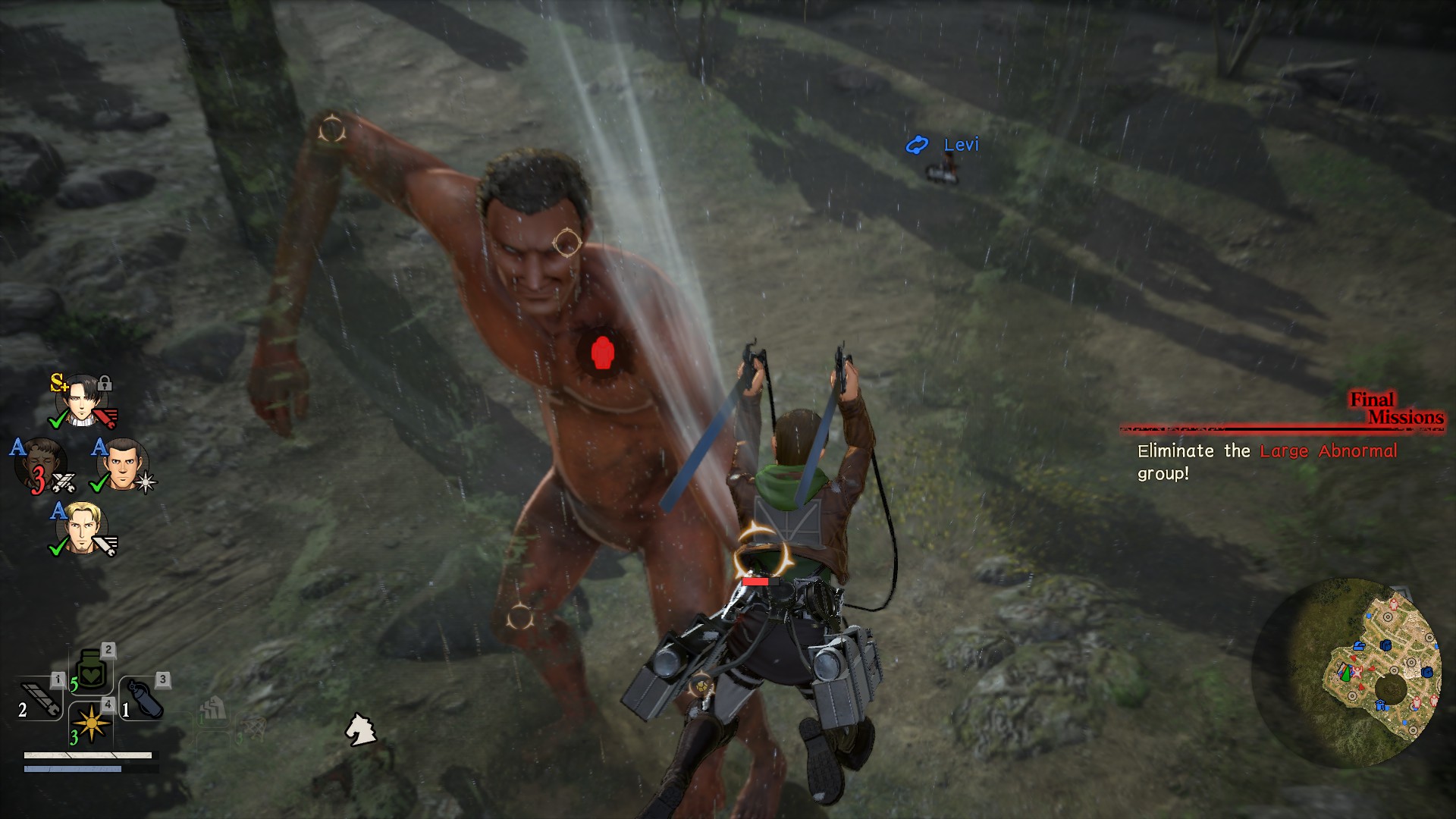 This is an entirely new feature. While not in battle, you can train to increase your atttributes, choose which policy the Scout Regiment should follow and most important of all, increase the bonds of friendship with the various characters. Your friendship rank with any character increases when you fight a battle alongside him/her, make fitting choices during dialogues or give the people gifts. If you want to increase your friendship rank with a certain character, you can invite him/her to join you on survey missions. Succeeding in survey missions also increases your reputation among the Scout Regiment, which is measured as wings of freedom, which you can spend to research building upgrades, suggest policies or to train your attributes. Whenever your friendship rank with a character increases enough, you will gain bonuses, such as increases to your attributes, other skills or even new policies if the person holds a noticeable influence over any regiment, such as Hange, commander Erwin, etc. The amount of skills you can have equipped is limited by skill points, which in turn depend on your character's level, capping at 100. However, this also allows you to create any set to your liking and play any way you want.

A little bonus treat: once you've completed every story mission, you can actually save some characters who died in canon while replaying certain levels. This is the only way to increase your friendship rank with certain people, such as Mina, Marco and Thomas, all of whom died relatively early in the story. 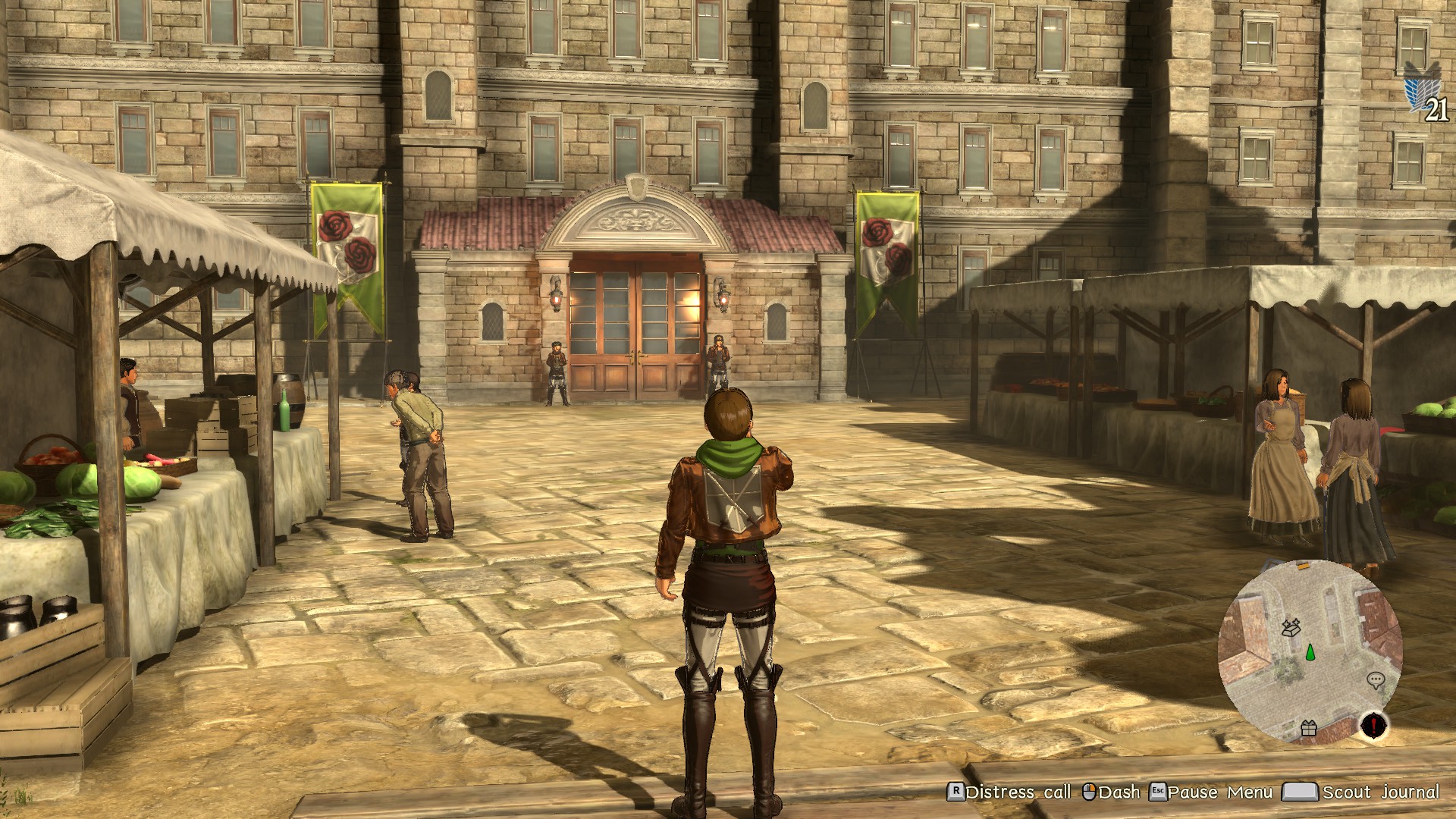 A rather appropriately titled game mode, where you can complete survey missions in online or offline play, either as your own character or as almost any character from the story. By comparison to Wings of Freedom, you have a far larger cast to pick from. In addition, not only can you control Eren as a Titan, but Annie, Reiner and Ymir as well, if you choose to play as any of the three.

It was recently announced that the game will have a big DLC, titled 'The Final Battle' coming this summer, featuring the events of the third season of the anime. It will bring with it new missions, new weapons and new characters to play as. Only downside is that it's going to be a big one, so it's not going to come cheap, especially when combined with the main game and all the purchasable DLC missions. At the moment, the scheduled date of release for 'The Final Battle' is July 5, 2019. 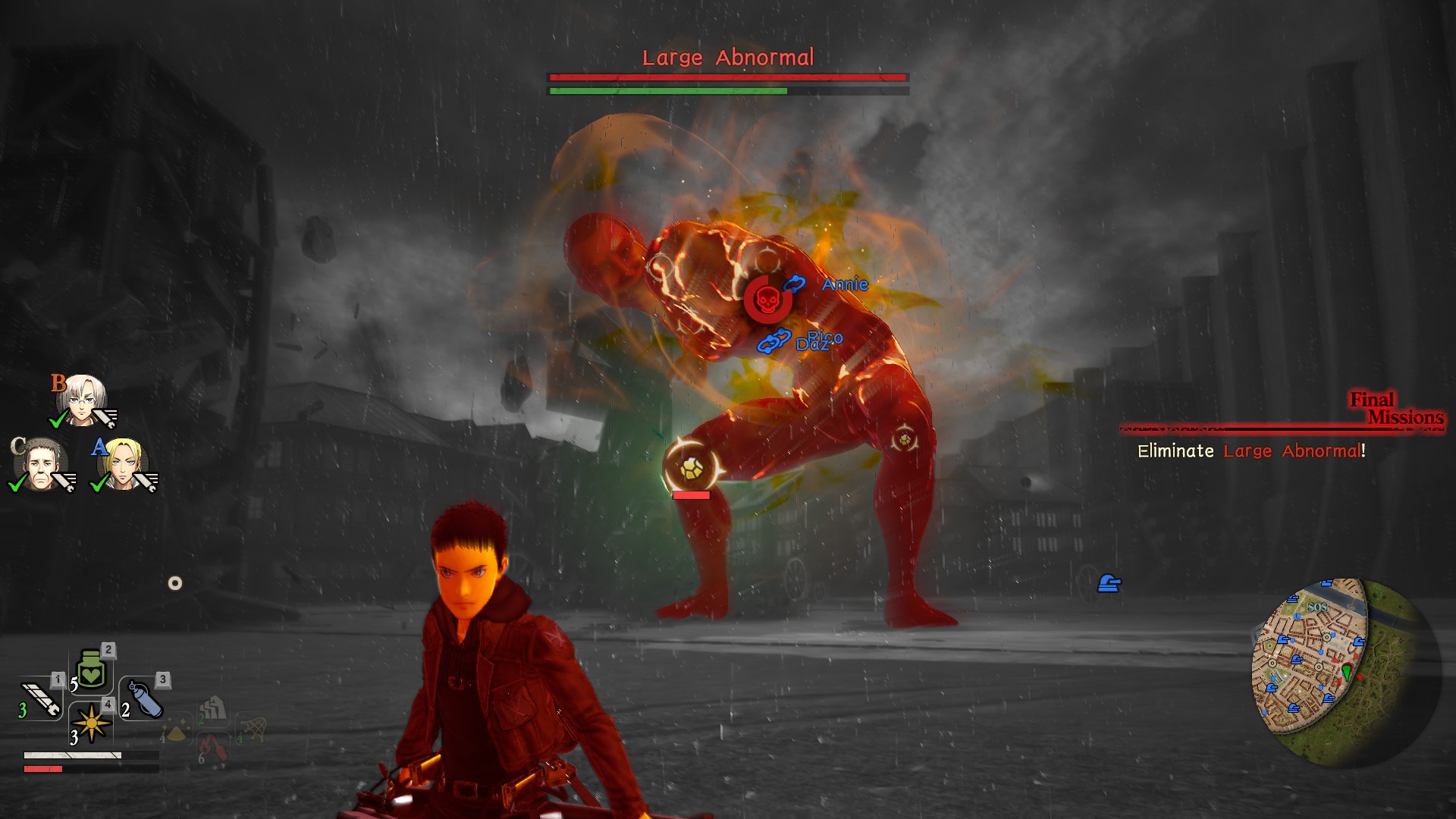 In my opinion, Attack on Titan 2 truly offers the gaming experience a fan of the series could hope for. Flexible character customization with several options, multiple new and improved ways to fight the Titans and almost every major character included. And the coming of the content related to the third season in the future means we haven't even seen everything yet. Definitely a game any diehard AOT fan should have.

lol this was great